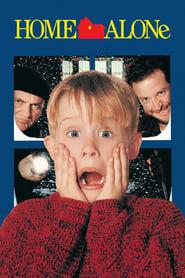 Where was Home Alone Filmed?

The real McCallister house in Winnetka was used for exterior shots. Scenes inside Kevin’s home were filmed on a two-storey set built in the gym of former New Trier Township High School (the flooded basement at the Wet Bandits’ crime scene was constructed in the school’s swimming pool).

As his rowdy family gather on the eve of their Christmas vacation, eight-year-old Kevin (Macaulay Culkin) wishes that the bossy, bullying brood would all just disappear. The precocious youngster gets the shock of his life, however, when he wakes up to find his wish has come true - in their hectic preparations, his parents have left for Paris without him. The McCallister clan are on the plane before they realise their error, and face an almighty struggle to get back home. Kevin, meanwhile, is having the time of his life - until burglars Harry (Joe Pesci) and Marv (Daniel Stern) come knocking. With a series of ingenious traps and schemes, Kevin soon discovers the thieves aren't the sharpest tools in the box. But can he stave off the bad guys until his parents get home?

This huge 90s' hit is most memorable for the outstanding, star-making performance of nine-yearold Culkin. His cheeky charm saw him become one of the world's most sought-after child actors and turned Home Alone into the second biggest-grossing film of the decade. A great supporting cast includes Catherine O'Hara, comedy legend John Candy and Pesci, giving a wonderfully wicked performance, in the same year as his Oscar-winning turn in Goodfellas. The direction from Harry Potter maestro Chris Columbus is pitch perfect, and the late John Hughes proved he could write cocky kids as well as troubled teens with his wonderfully mischievous screenplay. Tapping into the American ethos of defending the family home made this feisty comedy box office gold, and the film's winning mix of riotous humour and seasonal sentimentality have made it an enduring festive favourite.