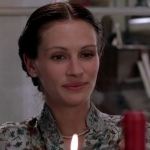 Where is Notting Hill filmed?

Released in 1999, this hugely popular romcom, produced by the team behind Four Weddings And A Funeral, won the Bafta Audience Award and an Evening Standard Peter Sellers Award for Comedy.

Divorcee William Thacker (Hugh Grant) runs an unprofitable bookshop in a trendy London neighbourhood, which attracts American movie star Anna Scott (Julia Roberts) as a customer. Minutes later they collide in the street, William accidentally covering her in orange juice. He invites her to his flat to clean up, and she impulsively kisses him before leaving.

When William's idle flatmate Spike (Rhys Ifans) fails to give him a message from Anna, William wonders if she has tried to contact him. Days later, they finally arrange a date, but William is forced to pose as a journalist to meet her, and then picks up the pieces after the tabloids publish nude shots of Anna as a teenager, forcing her to seek refuge back at his flat. The next morning, with the area swamped with reporters, Anna accuses William of kiss-and-tell betrayal and leaves. William must summon all his charm, ingenuity and patience if there is to be a happy ending...

Richard Curtis's script is a litany of one-liners balanced by a commentary on the pressures of fame: "I've been on a diet since I was 19," complains the svelte Julia, aware of Hollywood's body fascism. Ironically, Rhys Ifans pays this no notice, spends all but one scene with a Woodbine and workman's arse, and steals the film. Grant's patrician charm is also undeniable and the film went on to become the biggest British movie of all time, with $300 million in global receipts.