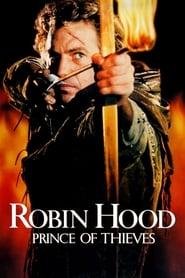 Where is Robin Hood Prince of Thieves filmed?

Robin of Locksley (Costner) returns to England from the Crusades to find his homeland under the iron grip of the Sheriff of Nottingham (Alan Rickman). When he discovers his father murdered and his family estate plundered, Robin, along with his Moorish companion Azeem (Morgan Freeman) and his devoted blind servant Duncan joins a gang of outlaws, inspiring them to fight back and end the Sheriff's reign of terror once and for all. And he does all this while romancing the beautiful Maid Marian (Mary Elizabeth Mastrantonio).

Despite the parade of A-list actors, the true star of the show is Alan Rickman's deliciously evil Sheriff of Nottingham. With his venomous one-liners and fantastic hamming, it's no wonder he earned a Bafta for his trouble. Perhaps what this film is most famous for, however, is Bryan Adams's theme tune, (Everything I Do) I Do It For You. It stayed at number one in the UK charts for a record-breaking 16 weeks, was the biggest selling single of 1991 and was nominated for an Oscar.