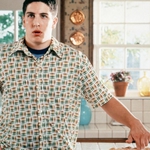 Where is American Pie filmed?

Best buddies Jim (Jason Biggs), Oz (Chris Klein), Finch (Eddie Kaye Thomas) and Kevin (Thomas Ian Nicholas) are heading for highschool graduation but still haven't managed to make the grade in the bedroom. Making a pact to lose their virginity before prom night, the four embark on various harebrained attempts to score for the first time, with Jim pursuing Nadia (Shannon Elizabeth), a beautiful Czech exchange student and Oz joining the school jazz choir in the hopes of impressing a likely lady. As one disaster after another befalls the boys - from Jim being caught sexually experimenting with a Pie, to Finch enduring laxativerelated humiliation - they gradually come to realise that there's much more to life than losing their collective cherries.

While it may have spawned scores of inferior imitations and plenty of lacklustre sequels and spinoffs, this lovable teen comedy remains one of the finest in the genre. With compelling characters and outlandish, yet credible, situations, American Pie may heap humiliations upon Jim and the gang but its heart is always in the right place. A raucous, although always affectionate, look at the trials and tribulations of adolescence, Paul Weitz's film also introduced a fine gaggle of young comedic actors, most notably Biggs and Seann William Scott, whose star-making turn as obnoxious party animal Stifler is one of the film's highlights. Also notable is veteran comedian Eugene Levy, who arguably steals the film during an uncomfortably brilliant man-to-man talk with Biggs after catching him in flagrante with the eponymous pastry product.