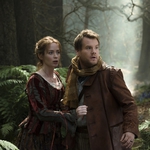 Where is Into the Woods filmed?

An Oscar-nominated Meryl Streep steals the show in this glittering adaptation of the classic Sondheim musical.

Streep stars as a gnarled, malevolent witch, who has placed a curse on the village Baker (James Corden) and his wife (Emily Blunt), intended to render them childless forever. Until, that is, she offers the desperate couple a deal: return from the woods with the ingredients for a potion, and shell reverse the curse.
Can encounters with Little Red Riding Hood (Lilla Crawford), Cinderella (Anna Kendrick), Rapunzel (Mackenzie Mauzy) and a youngster named Jack (Daniel Huttlestone) help them find the items theyre looking for?

Chicago director Marshall assembles an all-star cast for this hit musical fantasy. Adapted by James Lapine, who wrote the book for the original Broadway musical, it delivers all the lavish fun fans of the genre will be looking for, while also indulging in a dollop or two of darkness.

English export James Corden looks perfectly at home in his biggest film role to date, while sterling support comes from the likes of Chris Pine as a Prince Charming type and Johnny Depp as the bewhiskered Big Bad Wolf.