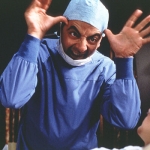 Where is Mr Bean: The Ultimate Disaster Movie filmed?

This is the big screen version of the ever-popular, and hilarious Mr Bean sitcom.

In this film Mr Bean (Rowan Atkinson) is working in the Royal National Museum as a caretaker.

Due to his hapless behaviour and constantly falling asleep on the job, his boss wishes to sack him, but is unable to as the chairman of the board of directors constantly defends him.

In an attempt to get our hero out of his sight and worries, they decide to send him to a Los Angeles art gallery instead. Here he will have to officiate at the opening of the greatest art pieces of all times, Whistler's Mother.

He agrees to this, despite knowing nothing of the painting or why hes there, but the Americans think hes just eccentric, befcause of his intelligence.

They really couldn't be as far from the truth could they?

The only thing that disappointed me about this film is that Mr Bean talks too muych in it.. something he neverdid, or needed to do in the series. Apparently the film makers had to make him talk so as to make the International audiences understand it.