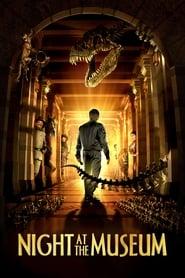 Where is Night at the Museum filmed?

Night watchman Larry Daley (Ben Stiller) thinks he's in for a quiet night when the doors close on the museum he's protecting, but he couldn't be more wrong. As darkness falls, the exhibits spring into life!

The problem is, it's Larry's first night on the job and a monkey from the African exhibit has shredded the manual on what to do. This is disastrous when civil war breaks out between the mannequins, a woolly mammoth thunders past and Attila The Hun is on the rampage. Luckily, a wax model of Theodore Roosevelt (Robin Williams) comes to his rescue, but it's only a temporary reprieve - the chaos starts again on Larry's next shift.

Released in 2006 and directed by Shawn Levy, it's a superb blend of live action and CGI, with Owen Wilson and Steve Coogan on scene-stealing form as the miniature cowboy and Roman centurion at loggerheads over the display-case landscape. Stiller is superb as the clueless new boy and there's fine comic support from his mentors Cecil (Dick Van Dyke), Gus (Mickey Rooney) and Reginald (Bill Cobbs.

All in all, an innovative addition to the adventure genre. Highly recommended.