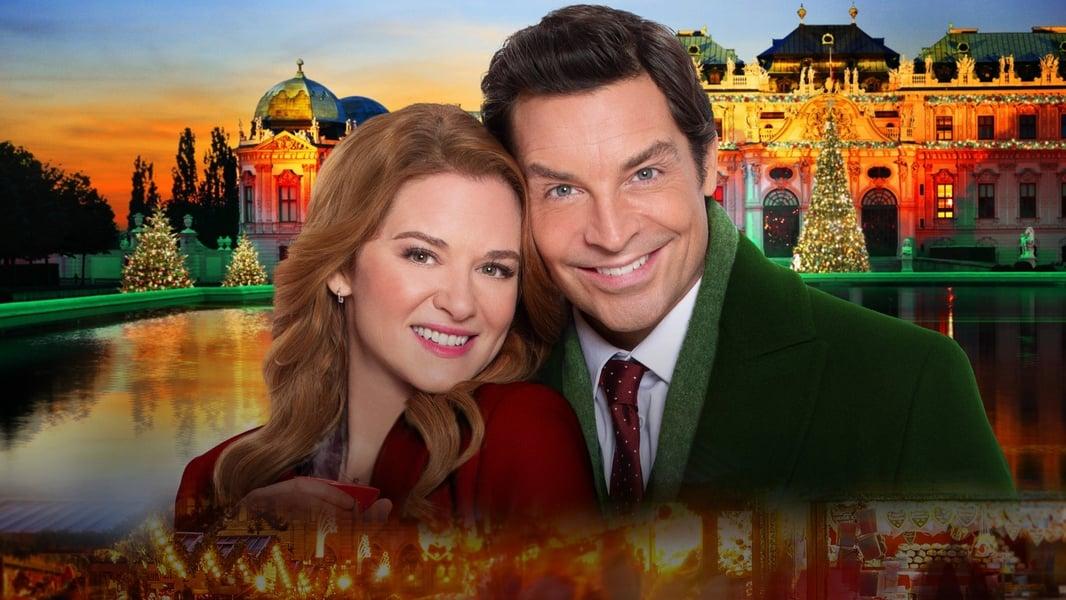 Jess Waters (Sarah Drew) travels to Vienna for a Christmas performance in one of the music-loving city’s theatres. Her friend Tori (Alina Fritsch) introduces Jess to her cousin, American diplomat Mark Olsen (Brennan Elliott) who lives in Austria.

Following another Austrian story, The Sound of Music, Jess also winds up looking after Mark’s three kids. With the help of Mark, Isla (Abigail Vollnhofer), Julian (Oskar Ricketts) and Summer (Allegra Tinnefeld), Jess rediscovers her love of music, and the magic of Christmas.

Where Was Christmas in Vienna Filmed? 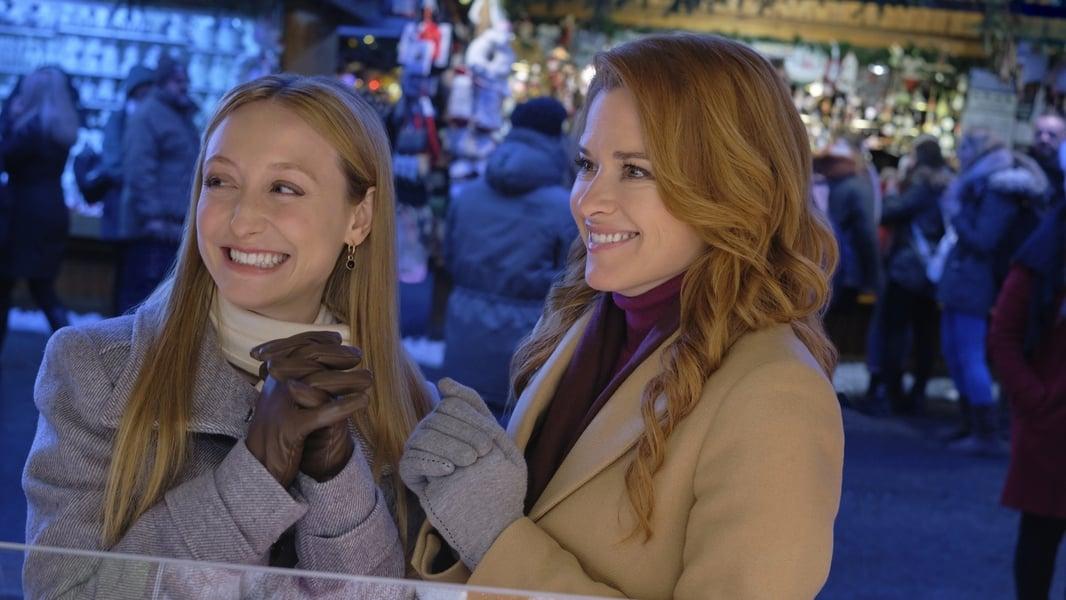 Don’t miss the real Austrian places and specialities mentioned throughout the movie! Did you pick up on the Olsen kids’ Mozartkugeln sweets? They’re a popular Salzburg speciality named in honour of the Austrian composer, Mozart, who was born in the city.

Each chocolate contains layers of pistachio, nougat and marzipan, following a 19th Century confectioner’s recipe. And if they sound tempting, you should know that they’re easily found throughout Austria’s grocery stores and gift shops.

Schloss Schönbrunn. C.Stadler/Bwag, CC BY-SA 4.0
Look out for Schönbrunn Palace in Christmas in Vienna as Jess and Mark the city. In the scene, Jess is fascinated by all of the palace’s history and musical heritage. It was once the Habsburg dynasty’s summer palace, and is now open to the public.

You can tour the Schönbrunn Palace rooms and exhibits seen in Christmas in Vienna, including the gilded Great Gallery.

If you want to follow in Jess and Mark’s music-loving footsteps, look out for the Hall of Mirrors where Mozart played piano at age six. And don’t miss the Palace Orangery where the famous composer played years later.

Christmas in Vienna’s Mozart statue is the Mozart Monument in Burggarten near St Stephen’s Cathedral and Hofburg. At first, you’ll probably notice the statue of the composer at the height of his career.

Take a closer look to find references to Mozart’s life. The monument reference the instruments favoured by the composer, and Mozart’s beginnings as a child prodigy.

The café Jess visits in Christmas in Vienna is the Café Sacher at the Hotel Sacher Wien. The Hallmark Christmas movie is true to life – the hotel created the famous Sacher-Torte. According to legend, the first Sacher-Torte was created by a 16-year-old apprentice in 1832 for a visiting prince.

It’s now one of Austria’s signature desserts, with layers of dark chocolate and apricot jam giving it a distinctive flavour. And you can try it for yourself! The Hotel Sacher have generously shared the approximate recipe for cake-lovers who want to try the Viennese dessert wherever they are in the world.

Hofburg Palace. Ank Kumar, CC BY-SA 4.0
The curving façade of Vienna’s Hofburg appears several times throughout Christmas in Vienna. Schloss Hofburg was once the Habsburg dynasty’s winter palace, one of their primary residences. One of its most notable residents was the same Empress Elisabeth, or Sisi, who is the subject of Netflix’s drama The Empress.

She was the wife of Emperor Franz Joseph, who ruled in the late 19th Century, and was famously unconventional. But she was also known for her fashions and almost floor-length hair. Alongside the Hofburg Palace’s imperial apartments, visitors can explore a museum dedicated to Empress Sisi.

And you may not realise this market has a particular remit. The 35-year-old market was established to gather traditional craftspeople from across the country to share their Advent creations in the city.

Jess and Mark stop for traditional Austrian street food at the Ludo’s Team stand in the Altwiener Christkindlmarkt. This is a real food stall that regularly appears in the market.

The ice skating rink in Christmas in Vienna is the Wiener Eistraum rink. Vienna’s picture perfect skating rink is located in Rathausplatz between the elegant city hall and the park’s fairy light-covered trees.

And according to the cast, it’s no ordinary ice rink.

Jess tries Apfelstrudel, or apple strudel, at the Vienna’s Wiener Christkindlmarkt, the city’s central Christmas market. Look out for the market’s glowing Frohe Weihnachten sign when it appears in Christmas in Vienna.

Because as the cast noted, this market is magical by day and by night.

‘We’re here at this incredible Christkindlmarkt… Vienna is known for these beautiful Christmas markets so here we are. The lights are coming on, the sun is going down, this place really comes alive at night.”
Sarah Drew, Jess

Vienna City Hall. Gryffindor, CC BY-SA 3.0 , via Wikimedia Commons
Another stunning Christmas in Vienna filming location is the Wiener Rathaus, or Vienna City Hall. It was built in the 1870s and 1880s to a design inspired by gothic cathedrals.

Vienna City Hall is used for everyday municipal work, but it also houses grander rooms used for state visits or formal events. Look out for the Festival Hall, which is used for galas and balls in real life.

The Christmas in Vienna location where Mozart was musical director is St Stephen’s Cathedral. In the Hallmark movie, Jess explains to Mark why the cathedral means so much to her.

Even in Mozart’s day, St Stephen’s Cathedral was notable. As the Roman Catholic Archdiocese of Vienna, the cathedral is a functioning place of worship that’s open for the public. You can access the church for free, though you have to pay an admission fee to tour some areas. Beyond the cathedral space Mark and Jess visit in Christmas in Austria, the sprawling gothic building holds catacombs, towers and the largest bell in all of Austria.

Did you catch the mention of Belvedere in Christmas in Vienna? It’s yet another example of stunning Viennese architecture, it actually covers three sites. And while most locations seen and mentioned in the movie are perfect for music aficionados, this is one is for art lovers.

Lower Belvedere’s residential palace, stables and Orangery host art exhibitions from past eras. Belvedere 21 is a contemporary art gallery. And Upper Belvedere is an 18th Century Baroque palace housing an art collection that goes back to the 12th Century.

In a city of Christmas markets, this one is known for its art exhibitions and handcrafted gifts.

Prater Amusement Park. Nicubunu, CC BY-SA 3.0
The Prater amusement park is in Leopoldstadt in Vienna, where kids of all ages can ride dozens of classic funfair rides. Each year it takes a seasonal turn when the Wintermarket arrives in Riesenradplatz – home to another location from the Mozart-themed Hallmark movie, the Wiener Reisenrad.

Jess and Mark take a ride on the Vienna Ferris Wheel later in the movie Christmas in Vienna. Like the London Eye, the Wiener Reisenrad has made its mark as part of the skyline – but the Vienna Ferris Wheel has the edge. While London’s South Bank landmark appeared just over 20 years ago, the Austrian equivalent harks back to 1897.

If you want to see Vienna from high above the Prater amusement ground like Jess in Christmas in Vienna, you can! Tickets are available to the public to take a spin in one of the wheel’s pods.

We think Christmas in Vienna’s theatre location is the Bucharest National Opera. Its design is remarkably close to some of Vienna’s respected theatres and opera houses, including the
Sarah Drew shared a photo from the stage, revealing that the opera house scenes were shot on the last day of filming.

‘I went to two concerts here, and I was actually brought to tears. The music halls are incredible, the acoustics are incredible. So getting to kind of tap into the magic of classical music that’s been around for centuries is a really lovely, and I think fresh, kind of experience in a Christmas holiday movie.’
Sarah Drew, Jess