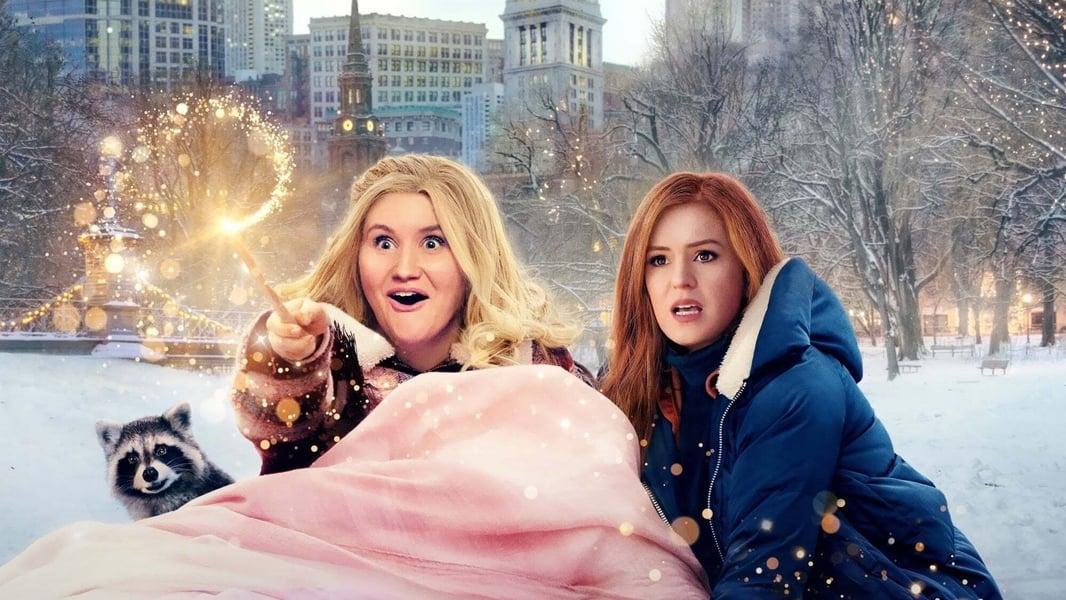 Directed by Bridget Jones’s Diary’s Sharon Maguire, Godmothered gives us a very different take on city life. Like the Bridget Jones movies’ London backdrops, this Disney+ movie is set almost entirely in real neighbourhood locations. The Godmothered line-up gives this modern fairy tale a totally believable world to play in – with a little bit of added magic on top.

The live action movie follows Eleanor (Jillian Bell), a godmother-in-training. But there’s something strange going on in the Motherland training programme – none of the trainees have been issued with an assignment for decades. Taking matters into her own hands, Eleanor enters the Assignment Room, tracks down a young girl’s wish, and sets out to find her.

Landing on the outskirts of Boston, Eleanor grapples with American social norms as she seeks out Mackenzie. It turns out the letter was in storage for so long that Mackenzie is now an adult, but you know what? She can still bring some magic to her life with the help of Mackenzie’s daughters, Jane (Jillian Shea Spaeder) and Mia (Willa Skye), and news team colleague Hugh (Santiago Cabrera).

Where Was Godmothered Filmed? 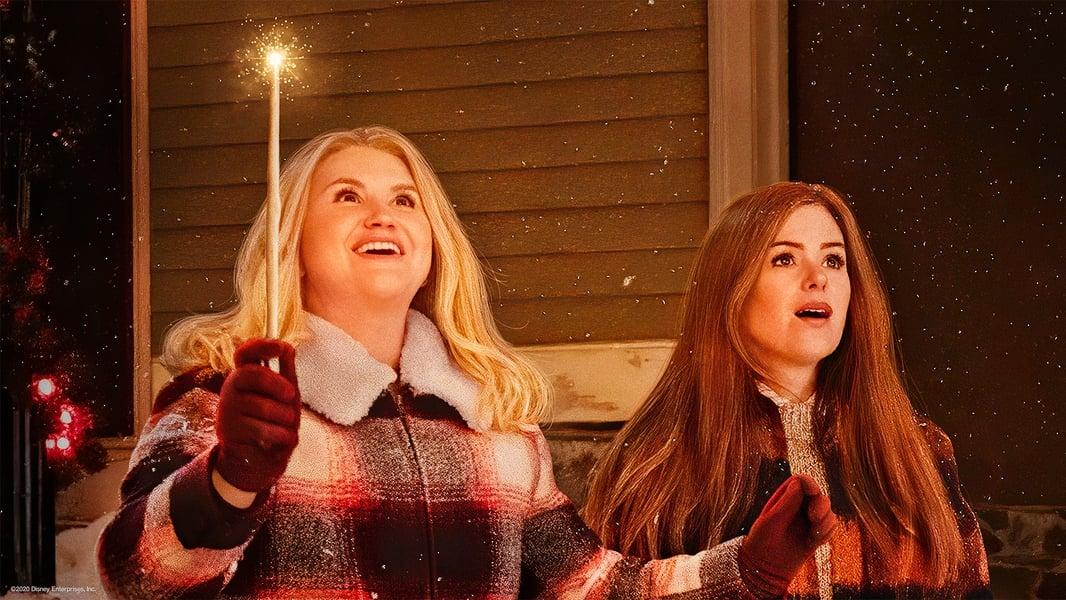 Godmothered was filmed in Boston Public Garden, Copley Square, Newbury Street, and around St Jean Baptiste Church in Lowell, Marblehead, Ipswich, and other Massachusetts locations. Look out for a Hocus Pocus crossover in Marblehead, and a shared Little Women backdrop in Ipswich!

As Eleanor helps Mackenzie’s family and tags along with the news team, we get to see iconic Boston sights like the Tobin Bridge and popular Back Bay area. The movie also takes us on a tour of perfectly preserved historic neighbourhoods, and out to the towns and countryside of Massachusetts.

Just to make it all a little more festive, each location was given a little bit of festive cheer as we go from pumpkin season to holiday parades.

Godmothered filming also took place at Brasenose College in Oxford, though it appears with the help of CGI. You can take a virtual tour of Brasenose College, or even visit this location in person on selected dates. 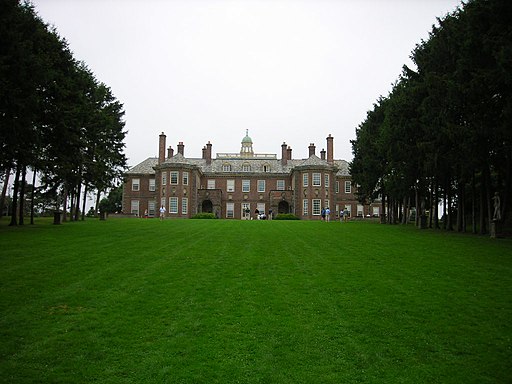 Crane Estate. Djmcrenn, CC BY 3.0
Eleanor’s pumpkin patch scene in Godmothered was filmed on the Crane Estate in Ipswich, Massachusetts. In the scene, Eleanor attempts to turn a pumpkin into a carriage to track down Mackenzie.

The Crane Estate was built on a plumbing dynasty’s fortune. Its owners styled the Great House after English manors, and the gardens in a Continental style, but you can’t miss the New England landscape. The Grand Allée and Steep Hill Beach are all about Atlantic Ocean views, while the land across the estate is full of creeks and marshes. This wilder area is where we find Eleanor’s pumpkin patch in Godmothered.

In fact, you may have seen this filming location before. The Crane Estate is a popular filming location and one of the key locations for 2019’s Little Women. And Crane Beach appears in the often-seen publicity shot of the March sisters standing together on the sand.

We think the scene where Eleanor is rescued by a truck driver was filmed on Argilla Road, Ipswich. The exact location is near the entrance to the Crane Estate, with Eleanor sitting on the south side of the road, putting Castle Hill on the unseen north side.

So Eleanor really hasn’t travelled far from the pumpkin patch when she stops for a rest, and the landscape genuinely matches up. You can make out similar marshland in the background.

Mackenzie’s house in Godmothered is in Pleasant Street, on the border of the Bunker Hill and Charlestown areas. Filming took place in January 2020, with Christmas decorations making a quick return to this residential street.

The Boyle Street sign visible in the Christmas lights scene looks like the real thing. It intersects Pleasant Street at the north end – the following junction would be Monument Square. Mackenzie’s house is very well situated in a preservation area, and of course, populated with privately owned properties.

But you can certainly visit the area’s many heritage site, including the Bunker Hill Monument, marking the site of the first battle between New England residents and British troops. The foundation stone of the monument was laid by the Marquis de Lafayette (now of Hamilton fame).

If you don’t already know, the Boston Bruins are Boston’s National Hockey League team. They play from TD Garden, just a few blocks from the plaza. So you can visit the Godmothered filming location at City Hall Plaza, but you can also check out the real team behind the scene!

The makeover scenes were filmed on Boston’s Newbury Street, near the corner of Fairfield Street. Look out for several of the street’s stores in this realistic makeover montage.

It runs between Massachusetts Avenue and Boston Public Garden – more on that location in a minute. Spanning several blocks in the Back Bay area, the Godmothered makeover filming location is lined with popular stores and cafes.

Essentially, a realistic destination for a Boston resident to take a shopping trip.

The costumed Boston Tea Party reenactors are in Boston Public Garden in front of the George Washington statue.

The Boston Tea Party took place on 16th December 17, which gives us a pretty accurate timeline for the events in the movie.
Despite the Sons of Liberty reenactors’ meeting point at the George Washington statue, the American Revolution’s iconic figure had mixed thoughts on the event. No surprise here, Washington was in favour of making a stand against British rule.

But since the cargo was private property (and let’s be honest, this was a waste of good tea), he didn’t agree with the protestors’ actions.

Trinity Church. Gregg Squeglia, CC BY-SA 4.0
The awkward Favourite Things busking scene was filmed in front of Trinity Church in Copley Square. Its colourful architecture is made up of sandstone and granite, while the skyscrapers that frame it are Five Hundred Boylston and John Hancock Tower.

The square is in the Back Bay neighbourhood, relatively close to Boston Public Garden which we see in the previous scene. And that means Mackenzie’s surprise appearance makes sense – you could easily walk between these two Boston parks from Newbury Street.

Luckily it doesn’t stop the young performers in their tracks. The girls earn six dollars and a chicken nugget, before we return to Pleasant Street for the Christmas decorating scene.

Mackenzie and her fairy godmother drive over the Tobin Bridge, originally known as the Mystic River Bridge. We also catch a glimpse of the logging truck crossing the Tobin Bridge when Eleanor first arrives in Boston.

It’s New England’s largest bridge, and links Charlestown on one side with Chelsea on the other. This Godmothered location is geographically accurate. Mackenzie’s house location sits in Charlestown, while the 8 News building in Chelsea – here’s the exact location.

Tobin Bridge. User:Chensiyuan, CC BY-SA 4.0
It looks like the 8 News WGDM building is on Broadway in Chelsea, just under the Tobin Bridge. Look out for it as the trucker drops Eleanor off at Mackenzie’s place of work.

And we see it again when TV crew get into the Snow Warrior 8 van, when you get a clear view of the bridge and street. The 8 News building is really the Polish Political club, a social club celebrating Polish culture that was once members only but is now open to all.

Listen out for a reference to Marblehead at the end of the team’s storm watch sledding scene. It’s accurate - Godmothered storm watch sequence was filmed in the real Marblehead, MA.

Look out for Pleasant Street as the team prepare for the shoot. This old neighbourhood is lined with Colonial Revival buildings, they didn’t just pick one photogenic corner.

The white church that’s seen as The Sound of Music plays is Grace Community Church – and it really does look this quaint in real life.

12. The News Team Celebrate in Marblehead

After the sledding scene, the news team regroup on Marblehead’s Washington Street, opposite Marblehead Outfitters and Lizzy Loo. A local photographic artist caught the shoot in progress from her window above the street.

The van is parked at the corner with Pleasant Street – the team are just around the corner from their starting point near Grace Community Church.
Wait, there’s more...

Both Godmothered filming locations are around the corner from a Hocus Pocus location! Max’s bike ride between school and the cemetery takes him along Washington Street and Town House Square.

The Hocus Pocus filming location is actually just out of shot in Godmothered (it’s obscured by the van). You can see the Godmothered location in Hocus Pocus for a moment, during Max’s bike ride before the cemetery scene with Jay, Ice and the Nikes.

The Boston Globe reported on a hotel location we see briefly during the Marblehead scenes. Tory’s Jewelry was given fresh signage for the shoot, becoming the exterior location of Mugford Hotel and Bar.

But Godmothered’s cosy hotel room location is actually Room 32 of the Harbor Light Inn, as confirmed by a venue on the movie’s release. https://www.facebook.com/HarborLightInn/ The scene marks a turning point, with Mackenzie and Eleanor sharing secrets on the bed after their adventures so far.

The Harbor Light Inn is further north on Washington Street, housed in an 18th Century building. And yes, this is a Godmothered location you can visit easily – and even stay in!

North Square. M2545, Public domain, via Wikimedia Commons
Godmothered’s carriage and ballgown transformation scene was filmed in Boston’s North Square in the North End area. North Square was given a magical makeover for the day – North End Waterfront caught the sparkling lights and Christmas decorations in place for the shoot.

Look out for North Square Oyster Bar, Ciao Bella (now Ciao Roma) and Mamma Maria in the background. As the girls hop into the carriage, you can see these real local restaurants around the square.

We think the godmothered parade scene was filmed around Boylston Street in Boston. Located in Back Bay, Boylston Street runs parallel to Newbury Street and is used for real parades and city events like the Boston Marathon.