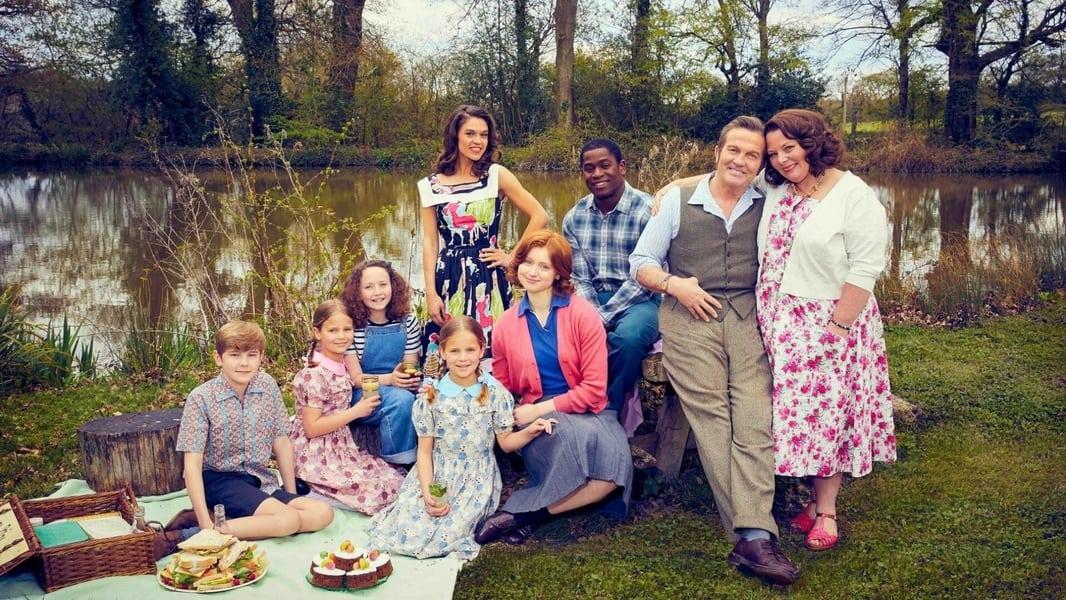 Written by The Durrells’ Simon Nye and Stella’s Abigail Wilson, leads this Darling Buds of May reboot is based on H E Bates’ novels. Pa (Bradley Walsh) and Ma (Joanna Scanlan), along with Mariette (Sabrina Bartlett) and the rest of the Larkin Family. Set in 1958, the series follows the Larkins as they cross paths with tax inspector Charley (Tok Stephen) and get into all kinds of silly scrapes.

The Darling Buds of May is set in Kent, and the new adaptation has gone out of its way to feature real Kent locations. ITV’s The Larkins was filmed in the Garden of England, with Home Farm scenes filmed on a working farm.

Where Was The Larkins Filmed?

New ITV Darling Buds of May series The Larkins was filmed on location at popular strawberry picking location Stonepitts Farm, farm scenes filmed at Westringham and Sundridge, town scenes in Faversham and village scenes in West Peckham, Underrive and Eynsford.

Look out for classic Garden of England scenes throughout the series, like the nostalgia-filled scenes of Ma and Pa Larkin’s seaside holiday to Margate and Viking Bay. 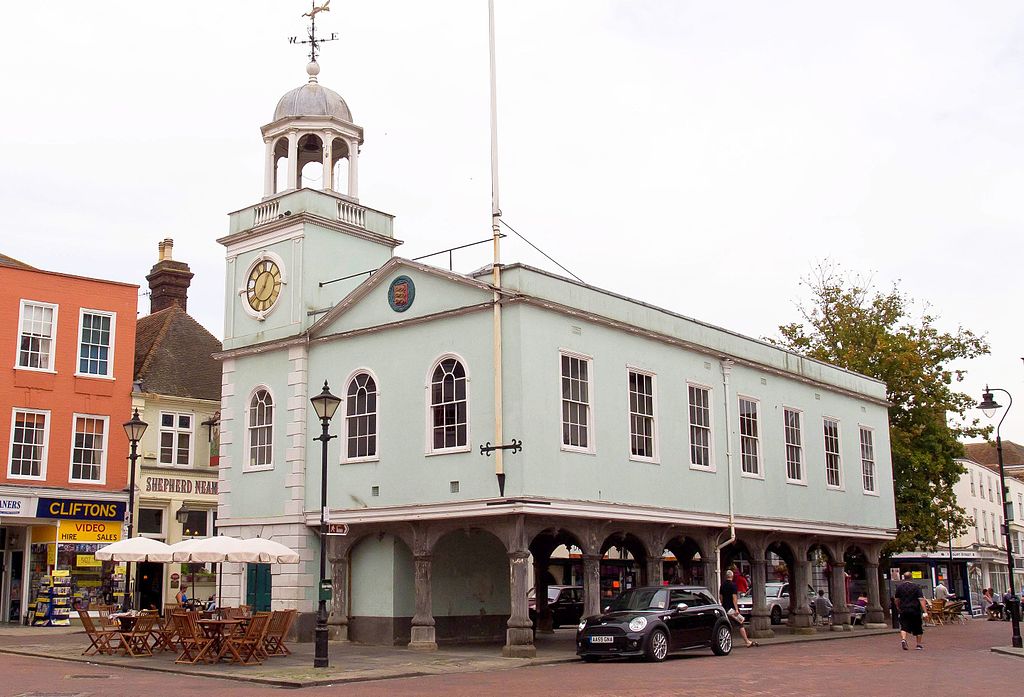 Faversham Market. Ed Webster, CC BY 2.0
The Larkins’ town scenes were filmed in Faversham in Kent – which boasts two Darling buds of May connections.

For the 2021 ITV series, Faversham’s Market Place was decorated in mid-20th Century signage, with all the local shopfronts transformed for the shoot.

The shops near the Guildhall were renamed Lotty’s Flowers and Batterlee Provisions and General Stores. The Bear Inn is already decked out in classic style, and kept its original sign during filming. Carter’s Newsagents became Venwell and Co, Ward and Partners was rebranded Coxfield Bank Ltd, and Presentimes was made over as Tilly’s Gifts.

The Shepherd Neame Brewery is the only Faversham location to appear in the David Jason Darling Buds of May series. Kent Live paid a visit to the location as it stands now, and noted that little has changed.

And that’s not the only link.

Faversham is the birthplace of The Darling Buds of May. In an interview with Kent Film Office, Richard Bates, Executive Producer of the 1990s adaptation and son of author H E Bates, revealed that his father came up with the idea after stopping near the town. 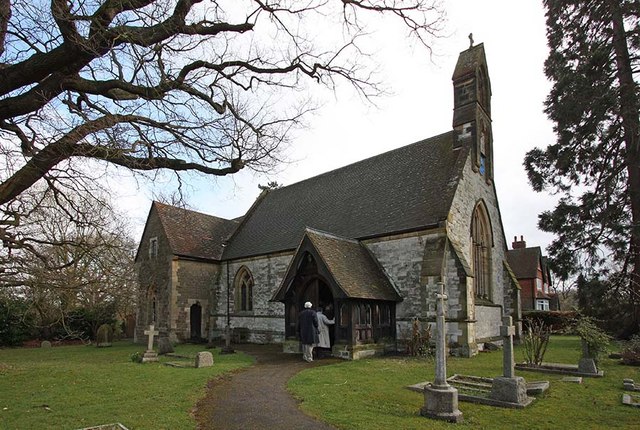 St Margaret's Underriver. John Salmon / St Margaret, Underriver, Kent
Making the most of the Kent setting, we get to see some distinctive architecture from the Garden of England. Underriver and Eynsford in Kent were used The Larkins’ Littlechurch Village scenes, along with West Peckham.

The West Peckham village shop and Church Row Cottages were used, along with several other local landmarks. If you’re wondering, the church is St Dunstan’s – which gives its name to Church Road, where filming took place.

3. The Hare and Hound

The Hare and Hound pub where Pa Larkin drinks is really The Swan in West Peckham. The location is set to appear in the Christmas special, with filming taking place in autumn 2021.

One of the first scenes in Episode 1, "In which we meet the Larkin family" cuts to an oast house’s distinctive peaked roof. They’re traditionally used for hops, which of course fits seamlessly with the shot of Pa Larkin sipping a beer outside the village pub.

And look out for other pub locations in The Larkins, with Eynsford’s Castle Hotel and Five Bells pub hosting the ITV series in June 2021.

The Littlechurch Police Station sign and entrance location also belong to West Peckham. They’re located at the end of the same row as The Swan (The Larkins’ Hare and Hound pub).
Pa Larkin’s parking is questioned when he pulls up at the start of Episode 1. Ironically, the police station location is beside the entrance to the car park.

The May Day fair scene was set in Littlechurch village green, with a sequence where Shakespeare’s Sonnet 18: Shall I compare thee to a summer's day? is read. Listen out for the extract that gave The Darling Buds of May its name, as the charity auction begins.

While the working farm used as The Larkins’ Home Farm location remains a secret, Kent Film Office identified two locations used for countryside scenes. Shots of the fields surrounding Home Farm were filmed at Long Barn in Sundridge, and at Squerryes Court in Westerham.

Squerryes has been home to the Ward family for 300 years, and produces award-winning wine from its vineyards. It’s also a filming location with several dramas to its name, including the Vanity Fair where the 17th Century manor house appeared as Miss Pinkerton’s Academy.

Long Barn is a lovely if inconspicuous Grade II-listed property in the depths of the Kent countryside. You might never guess that it was once owned by Vita Sackville-West and Harold Nicolson, who hosted Douglas Fairbanks, Charlie Chaplin and the Bloomsbury Group on a regular basis.

The Larkin family go strawberry picking at Stonepitts Farm in Episode 4, "In which the Larkins rescue the railway station" – another Kent filming location for the new ITV series. In the scene, things take a turn when Mariette gets caught up in an argument.

Situated near Sevenoaks, you can visit the strawberry farm from The Larkins because Stonepitts Farm really does host strawberry picking. Check for updates on dates throughout the summer!

Margate. Ben Sutherland from Forest Hill, London, European Union, CC BY 2.0
The Larkins’ trip to Margate was filmed around Broadstairs and Margate, the popular Kent seaside resorts. Look out for the Darling Buds of May characters’ beach trip in Episode 3, "In which Pop and Ma go on holiday", with filming taking place in July 2021.

Ma and Pa Larkin’s swimming scene was filmed at Viking Bay in Broadstairs, Thanet, along with other beach scenes. The Isle of Thanet News caught the shoot in progress as the Larkins were filmed lounging on deckchairs on the sand.

Viking Bay is kitted out with all the classic seaside fixtures and fittings, with beach huts and a boardwalk lining the shore. It’s not just for appearances in the 1950s-set ITV series!

And look out for the nearby Victoria Gardens, which was also used as a filming location for The Larkins.

The Ma and Pa Larkin hotel scenes were filmed at the Walpole Bay Hotel in Margate. Kent Film Office confirmed the location, with locals spotting Bradley Walsh and Joanna Scanlan filming the scene where Ma and Pa arrive and get their suitcases out of the car.

We’re set to see more from Margate in Killing Eve Season 4 after a busy year of filming in the Kent town. Look out for the Lido and Harbour Arm in the Sandra Oh and Jody Comer series.