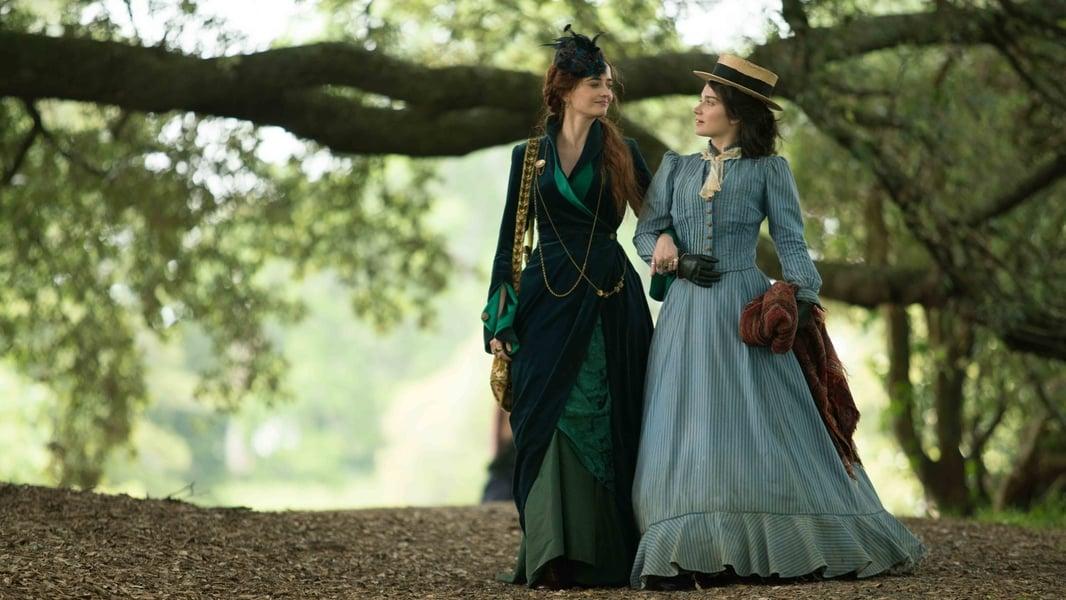 The Luminaries filming locations at Jonkers Farm and Penrose, Auckland housed ambitious sets for The House of Many Wishes and Hokitiki town.

When Catton reworked The Luminaries for the screenplay, the focus became Anna representing the sun with Emery as the moon. As the story expands, we meet a similar range of characters and cast list adds New Zealand and Australia’s own stars including Richard Te Are, Marton Csokas and Ewan Leslie.

Where Was The Luminaries Filmed?

The Luminaries was filmed on New Zealand’s West Coast in Auckland, at nearby Jonkers Farm and around Hokitika on the South Island. What we see onscreen is a blend of real landscapes and large-scale builds that come close to the production’s goal of 360-degree sets.

All the historic settings are real places connected to the New Zealand Gold Rush, but they had changed over the years.

“I was kind of optimistically hoping that there would be more period-correct architecture that we could utilise, for the shooting. But we quickly discovered that a lot of the things of the era made in the 1800s were sort of readapted or reappropriated into shops or housing.”
Claire McCarthy, Director

In the end, The Luminaries’ dozens of specially built sets were inspired by real buildings from New Zealand’s 19th Century towns. The show’s blend of historical drama and fantasy gave the production permission to use their creativity too.

Production Designer Felicity Abbott (Ladies in Black) and her team including Set Decorator Daniel Birt (The Mummy) took over farmland and industrial space to make it happen. And Ngāti Waewae consultants were on hand to ensure that traditional Hokitika heritage was accurately represented. 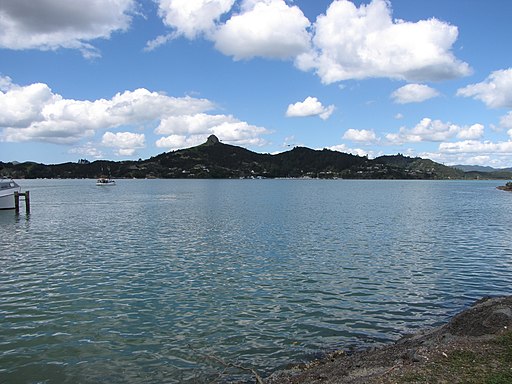 Whangaroa_Harbour. User:Gadfium / Public domain
The Luminaries’ Hokitika locations are Lake Kaniere and Crooked River in Hokitika, and Jonkers Farm near Auckland. Both locations sit on the West Coast, but Jonkers Farm is about 1000 km away from the real Hokitika.

The real Hokitika on the South Island was used for landscape shots, though of course Eleanor Catton’s novel and screenplay uses it as a key setting throughout.

Look out for the West Coast of the South Island’s sparking water and rocky landscape in Himesh Patel and Richard Te Are’s scenes. They filmed near on the Crooked River near Lake Brunner, after plans to film near Arahura River were abandoned due to flooding.

And more stunning landscapes were captured at Whangaroa harbour. It’s seen behind Anna and Emery as they exchange the button.

Look out for shots of the Southern Alps or Kā Tiritiri o te Moana.

Near the drama’s Auckland base, Jonkers Farm boasts its own vintage farm buildings which the production rounded out by building an entire town.

“We spent four long weeks at Jonkers Farm… They erected a town in the middle of a farm and it looked, for all intents and purposes, functional and real. There were horses and chickens running around and sheep in paddocks. It was a real thrill.”
Himesh Patel, Emery (BBC One)

And they really did build that Hokitika township. It didn’t just look the part. In fact, many of the interiors are functional and are used to their fullest. That includes Hokitika Jail, the Flatiron Hotel and more besides.

“We built - from scratch - the Hokitika town, which included the main township and all the elements that are within that: the jail, the cemetery, the opera tent, as well as 10 or 12 workable buildings plus additional components of buildings.”
Claire McCarthy, Director (BBC One)

It’s a huge-scale project – but it let the production take over so much space without managing town logistics. Or arranging a costly trip to the South Island for the whole cast and crew.

“Because of the scale needed to recreate Eleanor's world, we have more than 350 people working on the project… There was always going to be limit to how far backers were prepared to go financially.”
Lisa Chatfield, Producer

The historic farm sits on 540 acres of Puketotara land, making space a non-issue. And since it leads up to Bethells Beach, it’s on the doorstep of one of The Luminaries’ beach filming locations.

The Gridiron Hotel sits on the ramshackle street set based on the novel’s Revell Street. It’s one of the custom-built Hokitika buildings that lets characters pass from one location to another without interruption.

A real Gridiron Hotel in Hokitika existed during the 1860s, with a fairly similar clapboard exterior opening out onto the dirt road. Note the

The Luminaries’ gold miners’ camp was also built at Jonkers Farm, the same site used for the Hokitiki township.

In scenes set at the camp, the gold miners’ tents are pitched around the water’s edge. But you’ve probably noticed the Chinese prospectors had to find separate plots.

The Luminaries’ Chinatown scenes were also filmed on Jonkers Farm.

From the first episode, Chinese prospectors are segregated from the others. Quee Long (Outlander’s Gary Young) and others end up living at Kaniere Chinatown, along the river from Hokitiki.

In modern day New Zealand, Kaniere is part way between Hokitiki on the coast and Lake Kaniere’s scenic nature reserve. Lake Kaniere is also one of the Hokitika locations that appears onscreen – look for the rocky shore and lush greenery. 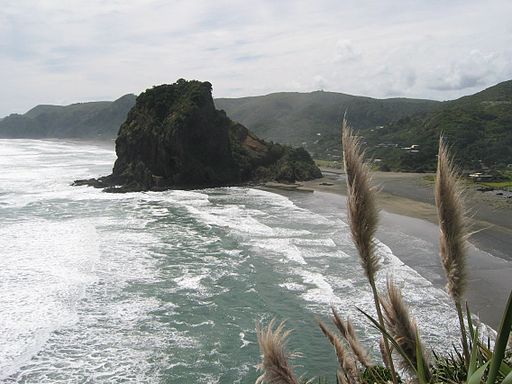 Piha Beach. Avenue / Public domain
Eva Green’s beach scenes were filmed at Piha Beach and Bethells Beach in Auckland. Of course, that puts them both near the production’s base in the city.

In The Luminaries the black sand beach framed by rolling cliffs is Piha, a popular local destination for beach days and surfing.

Bethells Beach or Te Henga, is visible from Jonkers Farm. Look out for its long stretches of black sand, which are interspersed with rocky outcrops, caves and natural arches.

New Zealand has recently seen filming for Mulan and of course, The Hobbit. But this particular beach has appeared onscreen for decades – it was a regular Xena: Warrior Princess filming location.

Other Luminaries beach shots were captures at Muriwai, one of the New Zealand’s most dangerous beaches. Changeable currents and strong swells earned the black-sand beach the title.

The scenes of white sandy beaches belong to the Tāwharanui Peninsula. It’s actually on the Hauraki Gulf on the East Coast, with reaches out towards the Pacific Ocean. 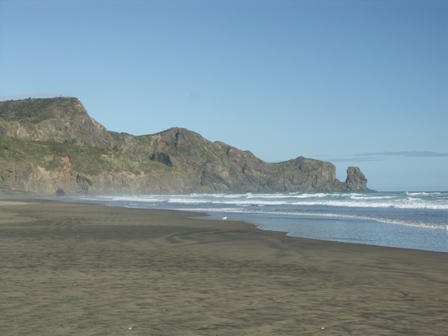 Bethels Beach. Wikipedia. / Public domain
One of the first locations we see in The Luminaries, Crosbie’s cottage, overlooks Bethells Beach. The shoreline beyond it is instantly recognisable, with the purpose-built cottage set standing on the edge of Jonkers Farm land.

In the novel, Crosbie Wells’ remote cottage sits on Poutini Ngāi Tahu land outside Hokitika, on “a hundred rolling acres on the eastern edge of the Arahura Valley”. It sits on the banks of the Arahura River, traditionally rich in greenstone.

The Luminaries’ Dunedin filming location was in Penrose, Auckland, where replica stores were built on an industrial car park.

Penrose dates back to the 19th Century, named for the Cornwall home of the family who bought the land from Maori chiefs. Today it’s better known as an industrial district, home to business parks and manufacturing plants.

The House of Many Wishes

The House of Many Wishes in The Luminaries isn’t real but the custom-built set was based on a real Dunedin hotel. Production Designer Felicity Abbott and Set Decorator Daniel Birt made the discovery in one of New Zealand’s archives.

“We came across a photo of a hotel in Dunedin, which is no longer in existence, formerly called The Oriental, it was this extraordinary Gothic piece of architecture… It had these very exotic orientalist details… that became the basis of the House of Many Wishes.”
Felicity Abbott, Production Designer

In the BBC drama that became The House of Many Wishes’ full two-storey house on the Dunedin set. The fortune house was constructed from its exteriors to those dark and mysterious interiors.

You start getting a sense of its scale from the very first episode as we see the staircase and lounge. Thanks to the extensive set the camera angles can reveal glimpses of each side of a door as the characters move through this key location.

The Godspeed and Gibson Quay

In The Luminaries novel, the Godspeed ship comes into Gibson’s Quay. In fact, the Godspeed scenes were filmed in Auckland, using the same industrial space as the Dunedin set.

With the show’s new structure, we won’t see the ship making its way into the quay until the second half of the series. Fans of the novel might have been surprised that it didn’t make an appearance sooner, but will hopefully agree that the aesthetic is spot-on.