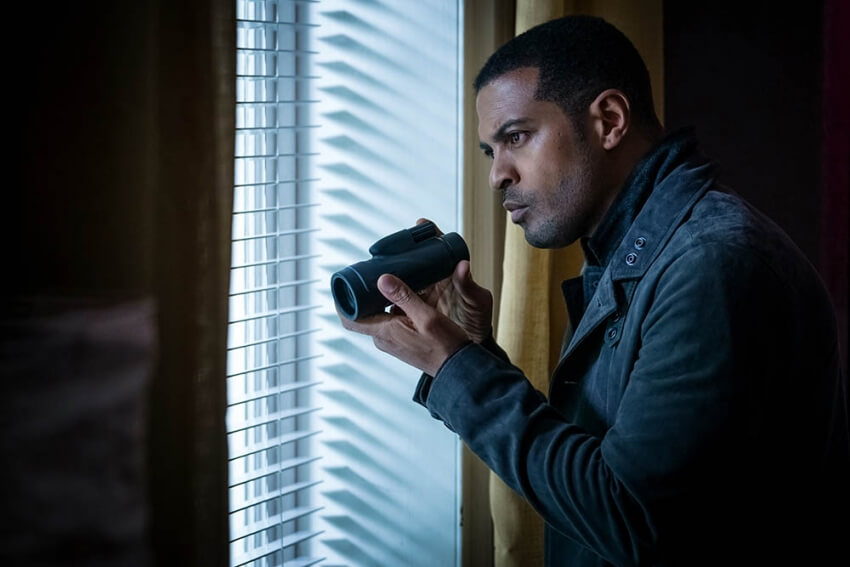 Starring BAFTA-winner Noel Clarke, the thriller was the first production to get out on location in Manchester after the first 2020 lockdown. So aside from the usual logistics, Tiger Aspect and Screen Manchester contended with a new set of protocols to get filming up and running on the city’s streets.

Inspired by Rear Window and The Lives of Others, Viewpoint follows surveillance officer DC Martin Young (Noel Clarke). He’s making a fresh start in surveillance after his CID career went wrong, but the two divisions cross paths on his new case. So Martin’s reputation is on the line once again.

To complicate things, surveillance throws DC Young into a strange dynamic. Creator Harry Bradbeer’s inspiration came from a friend whose own house was used for an investigation.

“a police officer in a private residence and the intimacy that situation brings watching a neighbour of the house that he is in. That seemed like a fresh way of looking at police work.”
Ed Whitmore, Writer and Executive Producer (ITV)

Where Is Viewpoint Filmed?

TV shows filmed in Manchester have used the city as 80s London for It’s a Sin, and 80s New York for The Crown Season 4. https://findthatlocation.com/blog/the-crown-season-4-filming-locations But this time, the goal was to use the city’s full range of locations, from the stunning Georgian terraces to the canals and old mills that dot the cityscape.

“Manchester is a beautiful place. It’s a modern city that is very much rooted in its industrial past, which for a filmmaker is a dream.”
Ashley Way, Director and Executive Producer (ITV)

With panoramas and panning shots taking in the city’s history and modern identity, you’d be forgiven for thinking the story was written for Manchester. In fact, the story and location were matched up for practical reasons. Once the idea came together, Manchester was woven right into the story.

“Initially Harry had seen the story as being set in London but we wanted to move away from London centric drama and yet have a city-scape. There was something in the big city storytelling that showed you can know half the people on your street and not know the other half at all.”
Lucy Bedford Executive Producer (ITV)

Here are some of the Viewpoint filming locations that set the scene... 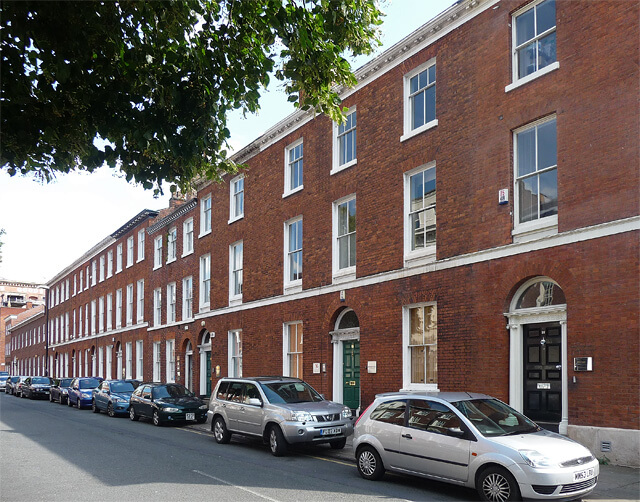 St John Street, Manchester (2)
cc-by-sa/2.0 - © Stephen Richards - geograph.org.uk/p/2806872
Viewpoint’s Westbury Street filming location is St John Street in central Manchester. Gemma’s house location is at the end of the north side of the street, at the corner of Byrom Street.

“You often see a lot of Castlefields and the Northern Quarter but we wanted to show people the concrete and glass, and the beautiful Georgian streets that it’s not necessarily known for.”
Ashley Way, Director and Executive Producer (ITV)

This is one such street, with elegant terraces leading to leafy gardens. In reality, though, it’s not all residential - many of the buildings on the row are actually barristers’ chambers.

Zoe’s house is located on the south side of St John Street, giving the diagonal view we see in Viewpoint’s many surveillance scenes. And of course, the St John Street and Byrom Street signs were replaced for the shoot.

Westbury Gardens are visible from the surveillance window. They’re really St John’s Gardens, at the end of the St John Street.

The first time Westbury Gardens are seen in Viewpoint they’re a crime scene from Gemma’s murder, with police combing the grounds.

The ITV drama’s Almond Avenue location is really Byrom Street. It runs along the foot of St John Street, with the entrance to the gardens in the centre.

Viewpoint’s neighbourhood is minutes away from the Old Granada Studios complex. Once the home of Coronation Street, the building has now repurposed, but still houses studio spaces used for filming the likes of Dragon’s Den.

The canal bridge on Gemma’s route to school is on Redhill Street in the New Islington area, just east of the Northern Quarter.

It links up several former industrial areas across the canals that crisscross the area. And of course, the contemporary bridge linking old Victorian streets is spot-on for Viewpoint’s perspective on Manchester.

While you might know Manchester’s Georgian streets, chances are you wouldn’t recognise this business centre unless you’ve worked in the area. If you’re wondering, it’s located north east of the city centre near the Oldham Road route.