It’s twenty years since Harry Potter first apparated onto bookshelves! To celebrate the 20th anniversary of Harry Potter and the Philosopher’s Stone’s publication, we’re revisiting some of the most magical, wizard-worthy filming locations from the movie adaptations.

Not many books or movies can claim to have created an entire world you want to be a part of. The Harry Potter Studio Tour on the edge of London takes you behind the scenes, letting you walk down Diagon Alley and see costumes and house point counters up close, or you can drop into the Wizarding World of Harry Potter in Florida.

We love it that some scenes were filmed out and about, bringing the magic out into our own world like the wizards’ occasional visits to the muggle world. There are countless Harry Potter filming locations dotted around the UK, from London to the Highlands but we think these are the ones that will give you that will make you feel like you’ve just received your letter by owl.

Fancy a Quidditch lesson? Alnwick Castle is the place to be. Surrounded by high stone walls and parkland, it looks just like Hogwarts School of Witchcraft and Wizardry. It was used for exterior shots including Madame Hooch’s class, in Harry Potter and the Philosopher’s Stone and Harry Potter and the Chamber of Secrets.

Alnwick Castle’s keep is still the home of the Percy family, whose ancestors have lived there for 700 of its 1000 years.

The family have opened the gates to films from Mary, Queen of Scots, Robin Hood: Prince of Thieves and the first series of Black Adder (the only one shot on location) to Downton Abbey’s later Christmas specials as the temporary home of Lord Sinderby and of course, Harry Potter.
They also open the doors to visitors, letting you walk around the grounds and castle or even attend broomstick training!

The Hogwarts Express sets off from London’s Kings Cross, but we think one of the points on its route will make you feel like you’re living the wizarding dream more than any other.

Catch West Coast Railways’ Jacobite Steam Train and pretend you’re making your way to Hogwarts as you pass Europe’s deepest seawater loch and Britain’s highest mountain, Ben Nevis. Everything from the black and red train with its plume of grey steam to the breathtaking Highland scenery looks the part.

You may not find pumpkin pasties on the trolley but you can choose to take High Tea on your journey – and that’s got to be better than risking an Everyflavour Bean! 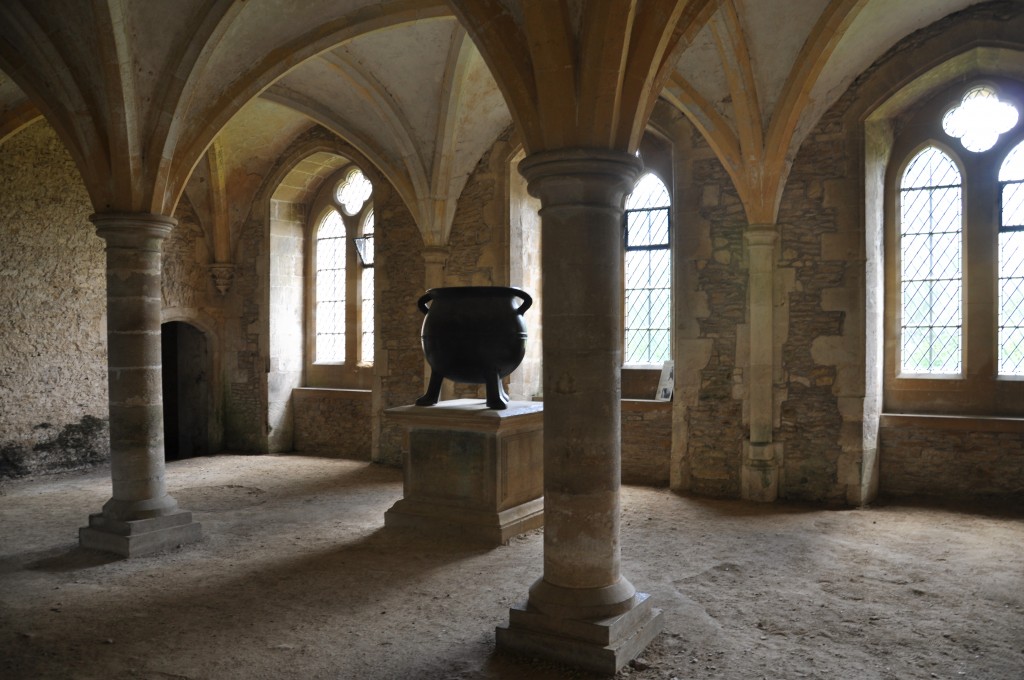 Lacock Abbey was used as the filming location for several classrooms and corridors in Harry Potter and the Philosopher’s Stone, including Snape’s potions room and the Mirror of Erised’s original hiding place. They are part of a former nunnery which could almost be mistaken for ruins, if not for the Tudor country house built around it.

The mirror is now gone but Professor Quirrells’s cauldron, on the other hand, is actually a 500-year-old part of the furniture in the cloisters’ warming room.

Walking into the Wiltshire village of Lacock just down the lane is like stepping into the past – or inside a novel. Its timber-framed cottages which lean this way and that, a picture-perfect setting for period dramas like Pride and Prejudice and the timeless world of Harry Potter. You’ll recognise it from the scenes where Harry and Dumbledore track down Professor Slughorn in Harry Potter and the Half-Blood Prince.

There are some charming shops if you want to take home a little part of this unique place, and a café run by National Trust, who care for the village and Abbey.

You can even stay overnight in a holiday cottage if, like Professor Slughorn, you want to find yourself a quiet retreat. 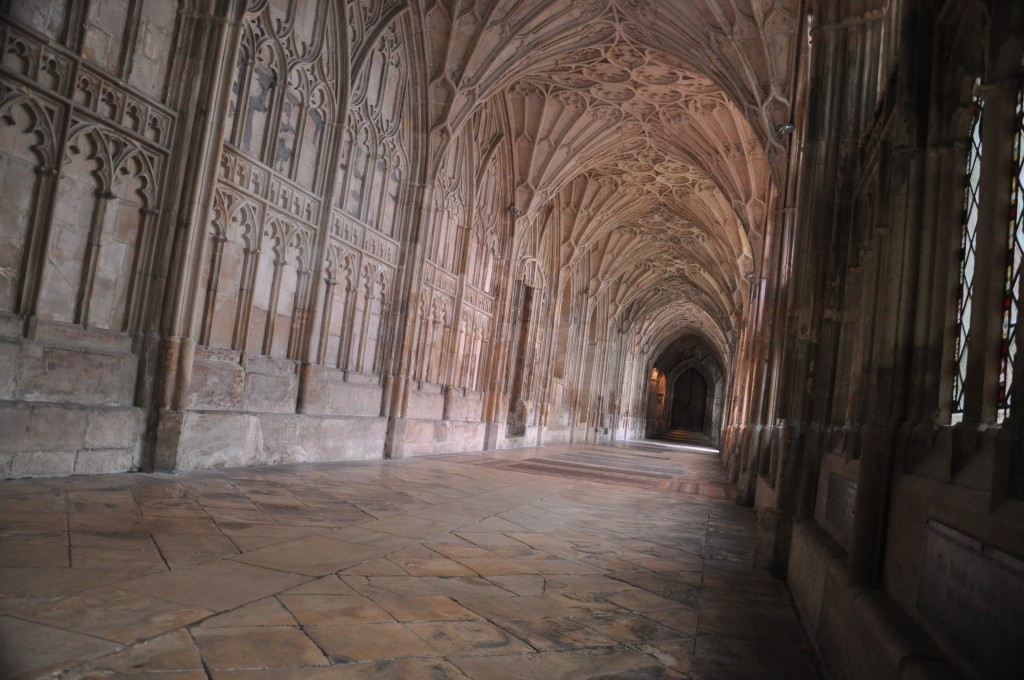 Gloucester Cathedral’s magnificent spaces are fascinating to walk round and of course, the cloisters helped Hogwarts’ corridors come to life.
The door to the Gryffindor common room was mocked up in front of a real door on the West Walk for filming, with the addition of the Fat Lady’s portrait in front of the entrance of course.

Ron and Harry hide from the troll in an alcove of the cloisters called the Lavatorium. It was once used as a place for the monks to wash, and was frequented by considerably fewer trolls in those days – as we all know, the modern troll prefers to visit the girls’ toilets.

Another appropriately named part of the cloisters featured as a Harry Potter and the Chamber of Secrets filming location. The Dark Entry was used as the entrance to the Chamber of Secrets. Not only did the floors have to be covered to conceal the tombstones below and distinctive stained glass made to look less muggle, the crew had to set up wall panels for the bloody scrawl of ‘Enemies of the Heir, Beware’ and a special container and pump system set up to flood the halls.

No need to break the magic spell at tea time. You’ll find the café down a flight of stairs and along a corridor leading underneath the building, guaranteed to make you feel like you might meet a house elf on its way to the kitchens. Keep a sock handy, just in case.

The lanes leading from the high street to the cathedral are brimming with enchanting independent shops and cafes which would fit right in alongside Weasleys’ Wizard Wheezes and the Leaky Cauldron too.

Fans of classic children’s books might want to stop en route to visit the bijou House of the Tailor of Gloucester, a treasure trove of all things Beatrix Potter on the doorstep of the Cathedral’s surrounding walls.

Oxford University is dotted with Harry Potter filming locations and inspiration, but we think this is one of the most magical places.
Pull on your invisibility cloak and light your lantern, we’re heading into the Restricted Section. The tour only admits you to the first few rows of Duke Humfrey’s medieval library, but between the near-silence and the oversized historical volumes that line the shelves, you’ll fully expect to see a copy of Moste Potente Potions lying around.

The Bodleian Library also plays host to another Harry Potter filming location. The 15th Century Divinity School’s pale medieval stonemasonry and unusually expansive windows make the university’s oldest teaching hall worth a look, but you’ll recognise it as the infirmary (with a little help from CGI). You’ll need to use your imagination to picture the room lined with beds and ‘get well soon’ cards.

If you’re planning a trip to Madame Pomfrey or the Restricted Section, make a point of checking that your favourite rooms will be open as these spaces are also used for Oxford University’s own events. You can’t explore for yourself as it’s a fully functioning library used daily by academics and scholars, but the guided tour will take you behind the doors and straight into Hogwarts.