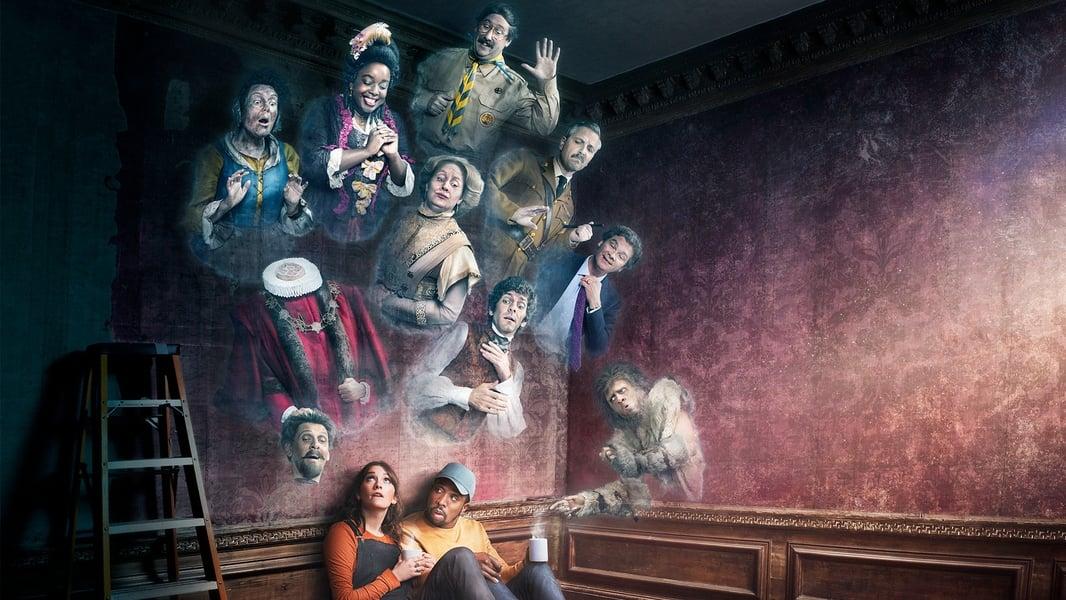 It’s the BBC Ghosts filming location you can’t miss – a rambling manor in Surrey plays Button Hall, home to spirits from across the centuries. Plus two unfortunate living inhabitants. We’re set to see a lot more of the principal filming location as the Horrible Histories and Yonderland team’s new comedy continues:

"...this place is haunted because someone died here and for some reason there’s this geographical link which means people stay where they die."
Laurence Rickard, Writer, Robin and Humphrey’s Head

With all but two of the main characters trapped in the house, nearly every scene takes place there.

Where is BBC Ghosts Filmed?

The BBC Ghosts sitcom is filmed at a stately home in Guildford. Those rare shots of the living inhabitants straying beyond the grounds are filmed nearby in Surrey. Scenes for Ghosts were shot around London Road and Clandon Road in Guildford in October 2018, attracting plenty of attention.

Daphne du Maurier fans might recognise it as the house from the recent adaptation of My Cousin Rachel, starring Sam Claflin and Rachel Weisz.

Onscreen, Alison and Mike’s new home is in desperate need of improvement before they can make their hotel dreams a reality. The principal Ghosts filming location is in the midst of a renovation project – though it’s a bit grander when it’s not dressed down for the BBC sitcom.

The Grade I-listed manor is decorated for simple elegance, but its rooms are still recognisable in Ghosts. Look out for the distinctive columns in the dining room, and of course the window where the nightly scream happens.

Even though the Horrible Histories team have taken the emphasis off accuracy this time round, it’s a fitting filming location for the spooky BBC One sitcom:

"...the characters are from history, but beyond that… it’s not aiming to educate in any way."
Mathew Baynton, Writer and Thomas

Some characters are based on historical figures or archetypes, but the factual element is meant to end there. Actually, the house where Ghosts is filmed has a bloody history of its own. With several lords of the manor meeting a sticky end, those sitcom spooks are quite close to home.

West Horsley Place was built in 1425, and the estate’s recorded history goes back even further. An early landowner, Sir Time Berners, was executed in the 14th Century in the name of Richard II.

Henry VIII granted the estate to his cousin, Henry Courtenay. He spent time socialising at the manor’s Stone Hall with his relation and courtier – before sentencing him to death for treason just a few years later. And Sir Walter Raleigh’s severed head was stored at the manor while his widow and son resided in it.

More recently, the Surrey manor was home to the Duchess of Roxburghe, who left the property to her nephew, TV host Bamber Gascoigne.

"...it was such a special place for Mary and it is a place with a remarkable history. We thought it would be better to try to make it habitable again for future generations."
Bamber Gascoigne

The estate’s new owners have worked tirelessly to get the multi-million pound project under way, selling off heirlooms and jewels to save the dilapidated manor. And of course, hosting film crews plays a part in the plan to bring the house back to its former glory.

In an unexpected turn of events, the estate has also become home to the first new, purpose-built opera house of the 21st Century. The opera world’s Wasfi Kani was seeking a new home for the Grange Park Opera – and turned to her acquaintance.

"I knew Bamber a little from his visits to The Grange and we quickly arranged a meeting. I fell in love with what I saw immediately, but it was Bamber who took me through a gate in a garden wall into an ungrazed meadow and said, 'This is where you should build your new opera house.'"
Wasfi Kani

Opera-goers can set foot in the grounds for performances, and there are occasional open days and events if you want to see for yourself.

Eventually the house is expected to open to the public on a regular basis. One day you’ll be able to walk where the Button Hall scenes were filmed, alongside Henry VIII and Lady Button.