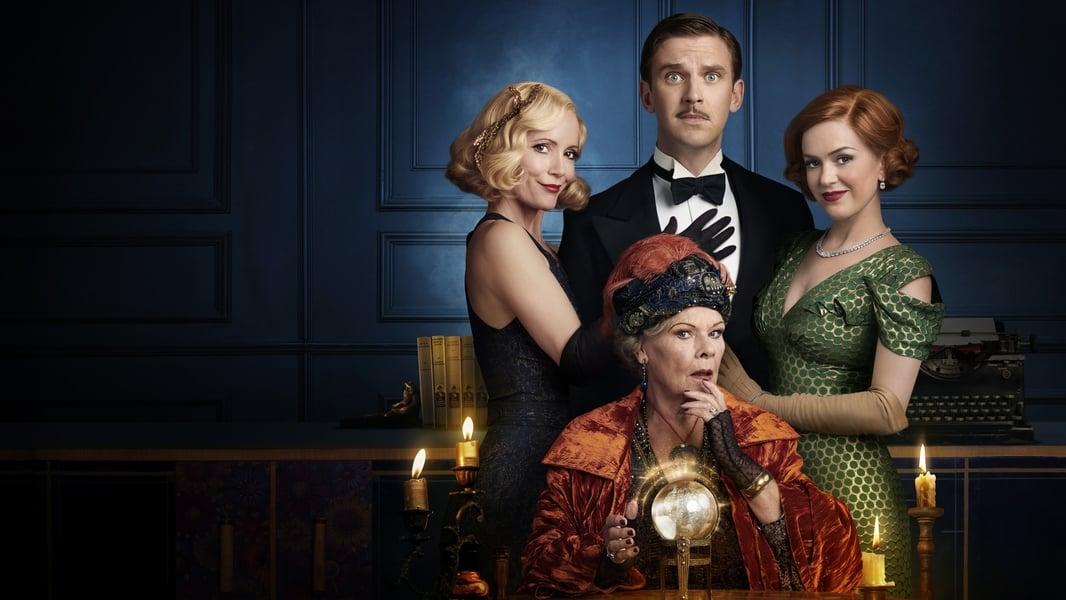 The house from Blithe Spirit is a modernist mansion in the Surrey Hills - and that’s where most of the supernatural action takes place.

It’s only supposed to be a jolly jape as research for his writing. But in fact, Madame Arcati summons up the spirit of his late first wife, Elvira (Leslie Mann). Which complicates things for Charles and his second wife, Ruth (Isla Fisher). 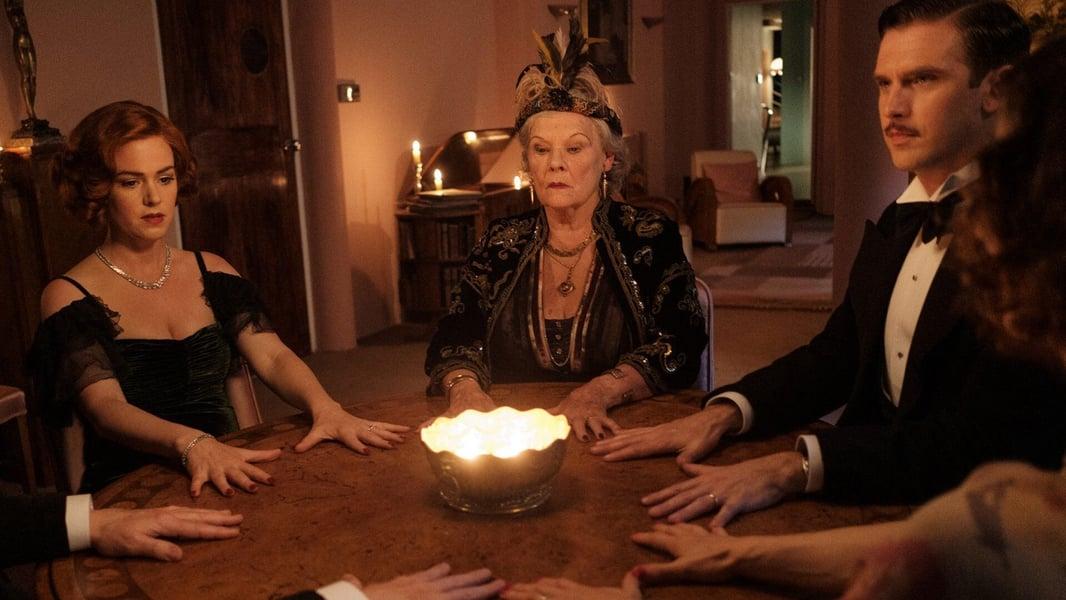 Blithe Spirit (2020) was filmed at a modernist house near Dorking and the Richmond Theatre in Surrey, plus scenes filmed at London’s aptly named Blythe House.

Director Edward Hall’s 2020 Blithe Spirit movie is not an adaptation of the 1945 film - it’s a reworking of Noel Coward’s 1941 stage comedy, which both are based on. Hall has long been associated with theatre, and has been Artistic Director of the Hampstead Theatre since 2010, so it’s a logical move.

And the screenplay comes from Fisherman’s Friends writer Meg Leonard and St Trinians’ Piers Ashworth and Nick Moorcroft who are, of course, no strangers to updating a classic British comedy classic.

Despite a few changes, the settings stick close to the era with a line-up of 1930s and 40s buildings alongside historic London locations. 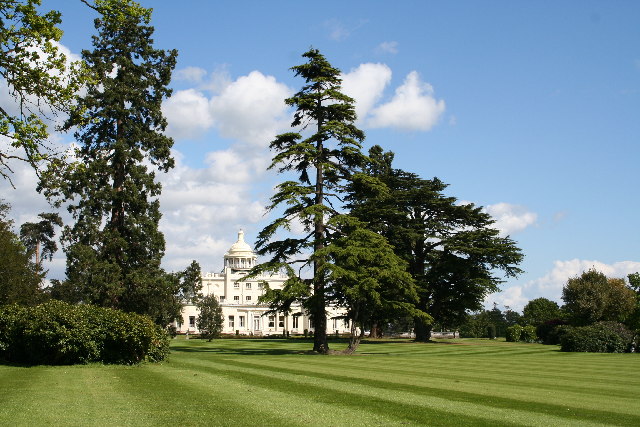 They’re playing on the Grass Courts, a row of six courts designed to Wimbledon specification. And the white building just visible through the hedges beyond the courts is Stoke Park’s original Palladian mansion, designed by James Wyatt.

Stoke Park is one of the Blithe Spirit filming locations you can visit, if you choose to book a stay... but it might come with a considerable price tag.

Richmond Theatre
cc-by-sa/2.0 - © Phillip Perry - geograph.org.uk/p/2087945
The Blithe Spirit theatre filming location where Madame Arcati performs is the Richmond Theatre in Surrey. Charles watches the medium Madame Arcati at the theatre before inviting her to his house in Lympne for the fateful séance.

We see the auditorium during her act, in the style of the supernatural shows that had survived from the late Victorian era into the 20th Century.

Look out for the Richmond Theatre’s distinctive marble proscenium arch and ivory-coloured boxes in the scene. They’re among the 120-year-old theatre’s elegant features.

Coincidentally, the Richmond Theatre hosted the Blithe Spirit revival with a cast led by Jennifer Saunders as Madame Arcati.

The touring production arrived in Richmond in February 2020, a year to the day before the film’s 2021 release (following a January UK release on Sky Cinema).

Foxwarren Park is Blithe Spirit's filming location for Madame Arcati's hotel. The Gothic mansion in Surrey is seen in establishing shots several times. Though it's heavily disguised by thunderstorms in the sky above, making its chimneys loom out if the darkness in suitably spooky fashion.

And we get a closer look at the Woldon Acre Hotel when Ruth visits Madame Arcati to ask for help with Elvira's ghost. She's seen walking through the entrance of the red brick building.

Foxwarren Park is said to have inspired Toad Hall, and was once home to American TV producer Hannah Weinstein. So it's a shame this location only makes a few brief appearances, but they're certainly atmospheric ones.

It’s a neo-Gothic mansion Portland stone mansion near London’s Strand that’s full of wood-panelled rooms and imposing spaces. We get a glimpse of its rooms when the medium has her meeting.

Originally built for William Waldorf Astor, Two Temple Place now specialises as an events venue and in recent years, hosts an annual collection of publicly-owned art from elsewhere in the UK. So restrictions permitting, you can visit this Blithe Spirit filming location at certain times of year.

Two Temple Place has appeared in Downton Abbey as Caxton Hall for Lady Rose’s wedding, as well as popping up in Bridget Jones: The Edge of Reason, The Royals and Mr Selfridge. And this elegant location is set to appear in The Batman, after filming took place in 2020.

Middle Temple is the London square location where Margot passes the spell to Madame Arcati. It's just around the corner from the London Filming Alliance filming location at Two Temple Place, so it's spot-on geographically.

The location for Charles and Ruth Condomine’s home in Blithe Spirit is Jolwynds in Surrey, as their house in Kent.

Built between 1930 and 1933, it’s a Grade II-listed modernist building that actually replaced an earlier Arts and Crafts home at the same site.

The whitewashed stucco mansion is an ideal early-20th Century setting that you might recognise from ITV’s Poirot.

Jolwynds was the Davenheim house filming location in The Disappearance of Mr Davenheim in 1990 (starring who else but David Suchet as the Belgian detective).

Only a year later, Suchet’s Poirot returned to the Surrey location when it became Kings Lacey for The Theft of the Royal Ruby. The repeated location was disguised somewhat by Christmas decorations and lighting for the midwinter mystery.

The hills surrounding Charles’ house in Blithe Spirit are the Surrey Hills, a designated Area of Outstanding Natural Beauty. Jolwynds is close to Dorking, on the southern side of the hills.

That puts it just an hour away from the Kent setting it represents in the film and the original play. Charles and Ruth’s house in Lympne was inspired by a reputedly haunted house in Kent, where playwright Noel Coward had stayed.

Today Slaybrook Hall is a cosy-looking Tudor house with Arts and Crafts (and modern-day) additions. But in the first half of the 20th Century, the Hythe mansion was known for spooky goings-on and writers including Coward and George du Maurier were regular visitors.

You can't miss London's Savoy when Elvira convinces Charles to take her out for cocktails. Its distinctive entrance is seen before the pair are shown in the bar.

The Savoy has been a popular hotel for decades, but it was one of the stand-out fashionable destinations in the late 1930s when Blithe Spirit is set. And fortunately for the production team, it's not changed much over the years.

Pinewood Studios becomes one of the Blithe Spirit filming locations - the real studio buildings appear in the movie.

Ruth’s father is high up at Pinewood, hence the extra pressure on Charles to get his screenplay right. It works out perfectly for us, with the chance to see the studios in full vintage mode. Look out for the Rank Organisation signage to bring you right back to the era!

The mortuary scene was filmed at Middle Temple in its distinctive glass-roofed passageway. It's an unlikely filming location for the setting, though it's certainly a stylish one.

Conditions allowing, you can tour certain areas of Middle Temple by arrangement. 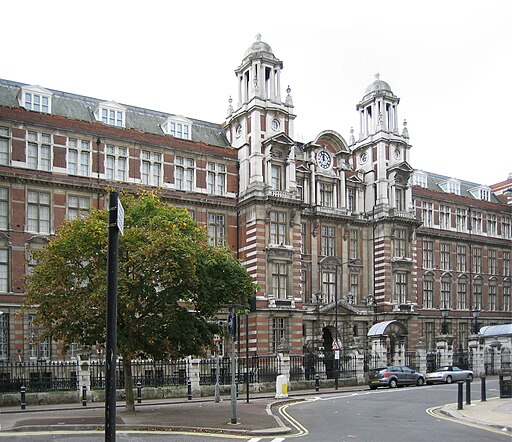 Blythe House. Docben, CC BY-SA 3.0
The institution's entrance is Blythe House, the former Post Office Savings Bank Headquarters in the scene where Elvira and Charles run up to the ambulance.

The red brick building on Blythe Road, West Kensington is now a popular filming location. Its turn of the century aesthetic lends itself to period dramas like The Crown, Tinker Tailor Soldier Spy and Chaplin.

And it has another cultural purpose too.

The Grade II-listed building is used as V&A Museum archives. Behind the walls seen onscreen, 8km of shelf space dedicated to the arts, design, the museum’s own history and theatrical performance - a fitting connection for the Noel Coward adaptation. 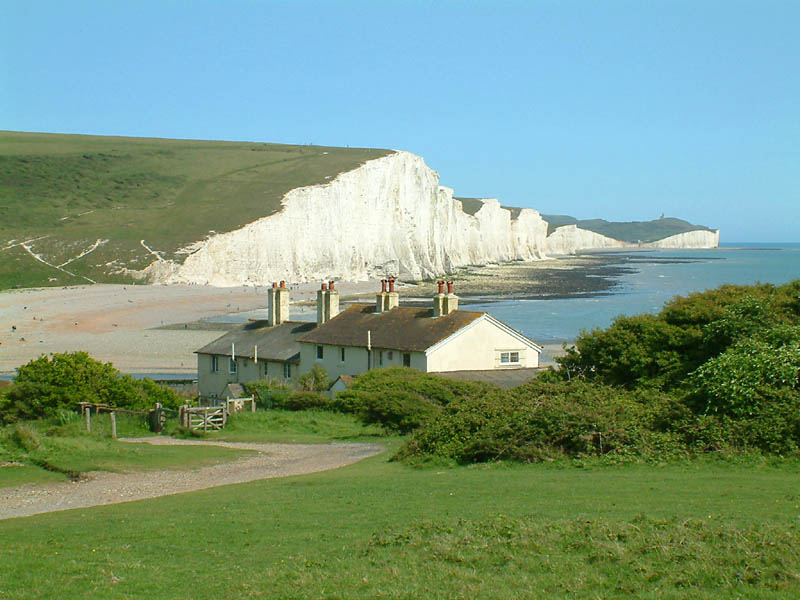 Cuckmere Haven. The original uploader was StephenDawson at English Wikipedia., CC BY-SA 2.0
The White Cliffs of Dover make an appearance in the film, true to the story's Kent origins, but this filming location is actually East Sussex.

Ruth drives by the Coastguard Cottages at Cuckmere Haven before her car is seen near the cliffs.

The newsstand that appears briefly at the end of the film is another Middle Temple location. Look out for the similar architecture as the London square seen earlier in the film.