The real Eddie the Eagle thought the film Cool Runnings would rule out his own underdog story from hitting cinemas (both the Jamaican bobsled team and Britain’s unlikely ski jumper competed in the 1988 Winter Olympics in Calgary).

For over twenty years he was right. But in 2016 a UK/German/US co-production finally brought the Winter Olympics XV back to the big screen with Taron Egerton, Hugh Jackman and Christopher Walken lending star power the biopic of an ambitious hopeful with a little skill and a lot of determination.

Where Was Eddie the Eagle Filmed?

Cool Runnings was shot almost immediately after the winter games, so the Disney production simply went to the scene of the action. It was shot in Calgary, Canada, in buildings and on slopes which were still almost unchanged. Recreating the same Olympics almost thirty years later is, of course a different matter.

LOCATIONS MAP:
View all the locations plotted on our Eddie the Eagle Locations Map

Many Olympic bids have been won on the strength of the lasting sporting and infrastructure legacies the Games bring to host cities. Incredibly, many of Calgary’s venues are still going strong 30 years later, with the city playing a major part in the winter sports scene, but that also means that they’ve moved with the times.

And with British and German production companies leading the project, it makes sense that Eddie the Eagle was filmed on European ski resorts instead.

We see Eddie approach the British Olympic Association’s London headquarters to put himself forwards for the ski jumping category, and later he returns as a potential entrant. Eddie and the other competitors are seen boarding the coach to Germany in the street outside the building.

Audley Square in London’s Mayfair was the filming location for the British Olympic Association Headquarters scenes. The committee’s actual headquarters can be found in nearby Fitzrovia, on a street with similar Georgian architecture.

At the start of the film, Eddie is seen trying out on a dry slope alongside other hopefuls before Dustin takes him aside and tells the would-be skier that he isn’t cut out for the sport. The scenes were shot close to home at the John Nike ski slope, now part of the vibrant Bracknell Ski Centre and Ice Rink in Berkshire.

After being let down by Dustin at the dry ski slope, Eddie talks to his dad. The pair sit on the scaffolding surrounding a suburban house. These Eddie the Eagle street scenes were filmed on the outskirts of Bracknell in Parkham Mead, just a few miles from the Bracknell Ski Centre.

Eddie waits optimistically to catch a bus to the Olympic Games as a young boy, and later the same shots are repeated as he sets off for Germany as a Winter Olympic hopeful. This Eddie the Eagle filming location isn’t found in Berkshire but in London – Silchester Road in Ladbroke Grove was used for these street scenes. 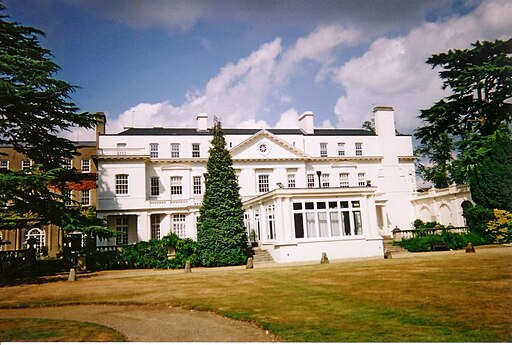 Heatherden Hall. Ruth Riddle [CC BY-SA 2.0 (https://creativecommons.org/licenses/by-sa/2.0)], via Wikimedia Commons
Heatherden Hall in Iver Heath, Buckinghamshire, is on the doorstep of Pinewood Studios. In fact, the 19th Century manor which acts as the home of the Olympic Committee sits at the heart of the studios’ estate.

The studios were built around it and as a result the stately building has been used as a convenient filming location for decades. Some of the rooms are used as Pinewood’s offices, but its oak-panelled ballroom and terraces complete with fountains are available to hire if you want to make the setting part of your own event.

Große Olympiaschanze. By Garmisch [GFDL (http://www.gnu.org/copyleft/fdl.html) or CC BY-SA 3.0 (https://creativecommons.org/licenses/by-sa/3.0)], from Wikimedia Commons
Eddie’s Olympic training takes place in Germany, where he meets Bronson Peary who will step in to coach him. Calgary isn’t the only Olympic host to retain its sporting venues. The picture-perfect Bavarian town of Garmisch-Partenkirchen hosted the 1936 Winter Olympics, and along with the Berlin 1936 Olympics is remembered for the controversy of hosting the Games under Nazi rule.

We can’t untangle the complicated political past completely, but incredibly the ski jumping hill where Eddie the Eagle was filmed has survived for eighty years and is still a sporting venue today. These scenes were filmed at Garmisch-Partenkirchen’s Große Olympiaschanze, which really is a Winter Olympics venue, though of course it’s been upgraded many times since.

The Olympic Village building can be found in a Bavarian ski resort close to the Austrian border. Edelweiss Lodge and Resort in the picture perfect town of Garmisch-Partenkirchen isn’t actually a typical ski centre, it’s a US Armed Forces Recreation Center. As a result, this Alpine lodge’s décor hints at North American resort style – the perfect setting for Eddie the Eagle’s Canadian scenes.

The resort was decked out in Olympic regalia to make it look the part, but also to hide modern fixtures and fittings from view. And in a nice touch, members of staff were signed up as extras and dressed in 1980s winterwear to join the production.

In the film’s finale, we watch as Eddie makes the most of his big shot. The Calgary jump scenes were filmed at Audi Arena Obersdorf, situated further west but still within Bavaria. http://www.audiarena.de/arena/ The arena’s ski jumping hill was used in competition scenes, with crowds of spectators filling the arena while the Alpine vista rises up in the background.