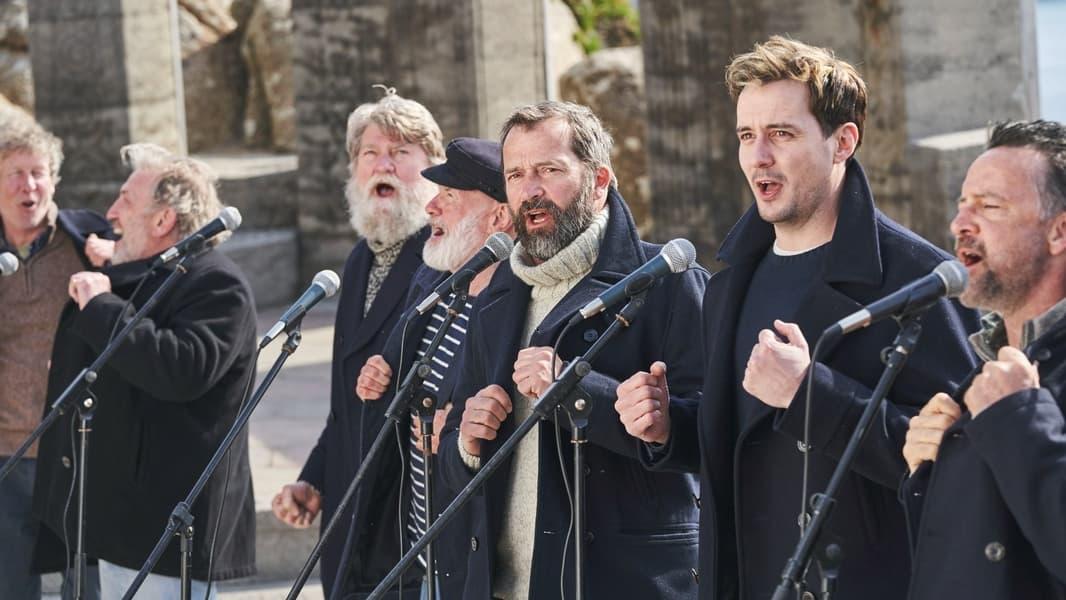 In Fisherman’s Friends: One and All, the Cornwall band work out what’s next, now that they’ve become a musical sensation. As they set off touring iconic UK venues, they also deal with the loss of their friend and bandmate.

Like the first film, the second Fisherman’s Friends film is based on real life, but the details have been fictionalised. That includes the highs and the lows.

In reality, the shanty group lost two of their number as their second album was getting under way. The movie pays its respects by weaving in the bittersweet storyline alongside scenes of the band’s musical success and usual camaraderie.

Where Was Fisherman’s Friends: One and All Filmed?

Fisherman’s Friends: One and All was filmed around Cornwall at Port Isaac’s Platt, local streets and Golden Lion, the Minack Theatre and café in Porthcurno and London.

Location filming commenced in April 2021. The screenwriters behind the first film, Nick Moorcroft, Meg Leonard and Piers Ashworth, returned to write the script. Moorcroft and Leonard also took over directing duties for Fisherman’s Friends 2. And many of the cast returned too, bringing the fictional band back to carry on where Fisherman’s Friends left off.

Port Isaac. Sbeech at English Wikipedia, Public domain, via Wikimedia Commons
The harbour in Fisherman’s Friends: One and All is the Port Isaac Platt. The Platt is simply the harbour area where fisherman can set down their catches and crab pots.

And of course, the Fisherman’s Friends sing at the Port Isaac Platt in the movie and in real life. The original musical group have been performing there for 30 years, making it an iconic location for fans. Due to the band and the movies’ success, crowds have outgrown the space, turning Platt appearances into a rare occurrence.

The Pub in Port Isaac

A secret smugglers’ passage runs beneath the floorboards. Fortunately for curious visitors, you can view it through a glass panel.

But once again, it’s a familiar location to the real Fisherman’s Friends group. Back in 2010, the real Cornish singers recorded a CD live from the same church.

Minack Theatre, Cornwall by nick macneill, CC BY-SA 2.0
The outdoor theatre in Fisherman’s Friends 2 is the Minack Theatre in Cornwall. It’s easily recognisable if you know it, thanks to its impossible-looking clifftop location.

The real Fisherman’s Friends have performed at the Minack Theatre numerous times but this time we can all get a seat.

Fisherman’s Friends: One and All’s theatre scene shows the onscreen version of the Cornwall band onstage at the very same location.

Residents of Porthcurno spotted the production setting up near the amphitheatre in April 2021. Quick local photographers caught the yellow tour bus from the movie waiting on one of the local roads, ready for its moment.

The Cornwall press conference location in Fisherman’s Friends: One and All is the Minack café. You might even find a table in the exact spot where the buoy band is standing in the scene!

The cafe with its impressive view of the ocean is on the edge of the Minack Theatre, and of course, you can usually find cream teas on the menu.

The Tamar Bridge is the 1960s suspension bridge that runs between Plymouth and Saltash. Prepare in advance if you want to travel across it for yourself - it’s a toll bridge.

You can’t miss Tower Bridge and the usual landmarks as the buoy band arrive in London. The Shard and Walkie Talkie get a look-in too. 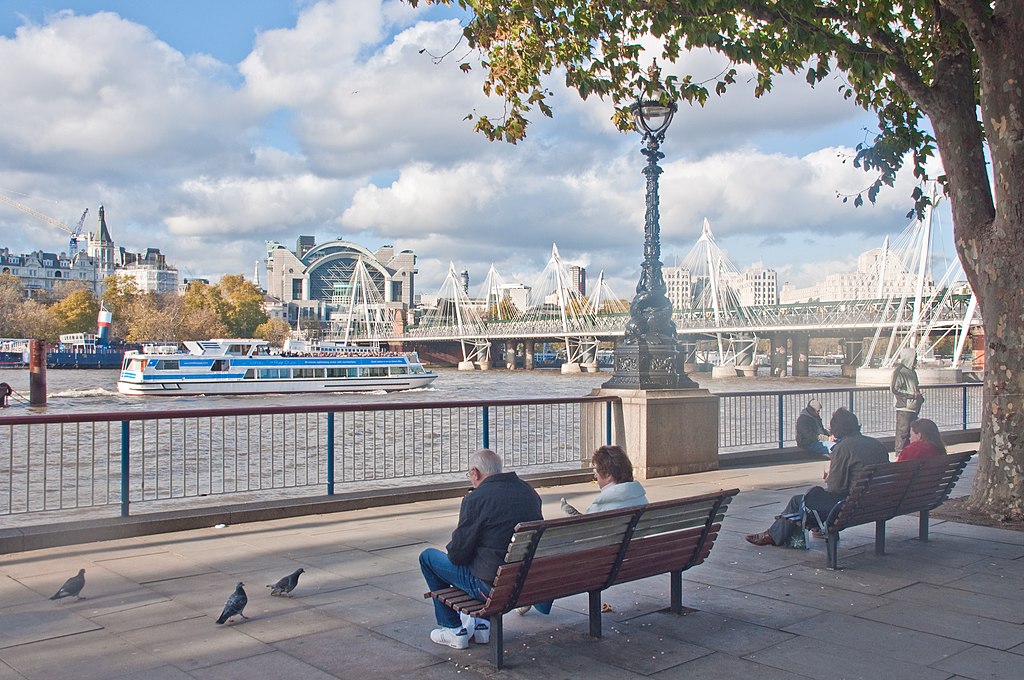 Queen's Walk, London. Phillip Capper from Wellington, New Zealand, CC BY 2.0
Fisherman’s Friends 2 London locations include South Bank, in shots of the Cornwall singers walking through the capital. Look out for The Queen’s Walk in particular - this leafy part of the area runs between Waterloo Bridge and Blackfriars. The buoy band’s route takes them in the direction of the tourist hotspot around the London Eye.

The Pyramid Stage scenes were originally intended to be shot at Worthy Farm. But with the pandemic casting a shadow over large scale events, Glastonbury 2021 was cancelled so the Pyramid Stage didn’t go up.

“I thought, 'Oh my God, I'm going to get to play Glastonbury'. The very idea that I could stand on that Pyramid Stage in front of 80,000 people appealed to my ego so appallingly well that I couldn't resist it. Of course, the pandemic happened and we ended up shooting it somewhere else.”
James Purefoy, Jim