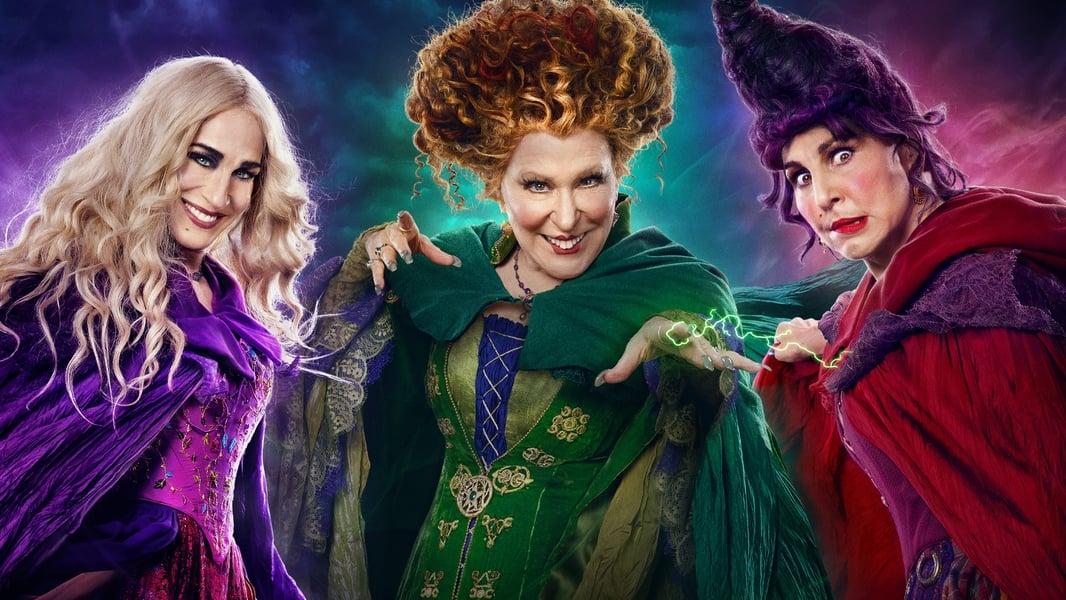 Winifred (Bette Midler), Mary (Kathy Najimy) and Sarah (Sarah Jessica Parker) Sanderson are back in Salem, Massachusetts. Banished since the events of 1993, they’re summoned by three girls who light the black flame candle on Halloween. Can Becca (Whitney Peak), Cassie (Lilia Buckingham) and Izzy (Belissa Escobedo) send the Sanderson Sisters back before sunrise?

While director Kenny Ortega isn’t returning for Hocus Pocus 2, the sequel has been taken on by Anne Fletcher. Like Ortega, Fletcher started out as a dancer and choreographer, before moving onto directing romances and comedies including Step Up, 27 Dresses and The Proposal.

But according to Bette Midler, the main trio’s connection to the Sanderson Sisters hasn’t changed one bit.

“The moment we walked on the set, the dynamic between the three of us was exactly the same as it was thirty years ago. It’s as if these characters lived with us for the last thirty years.”
Bette Midler, Winifred Sanderson

Where Was Hocus Pocus 2 Filmed? 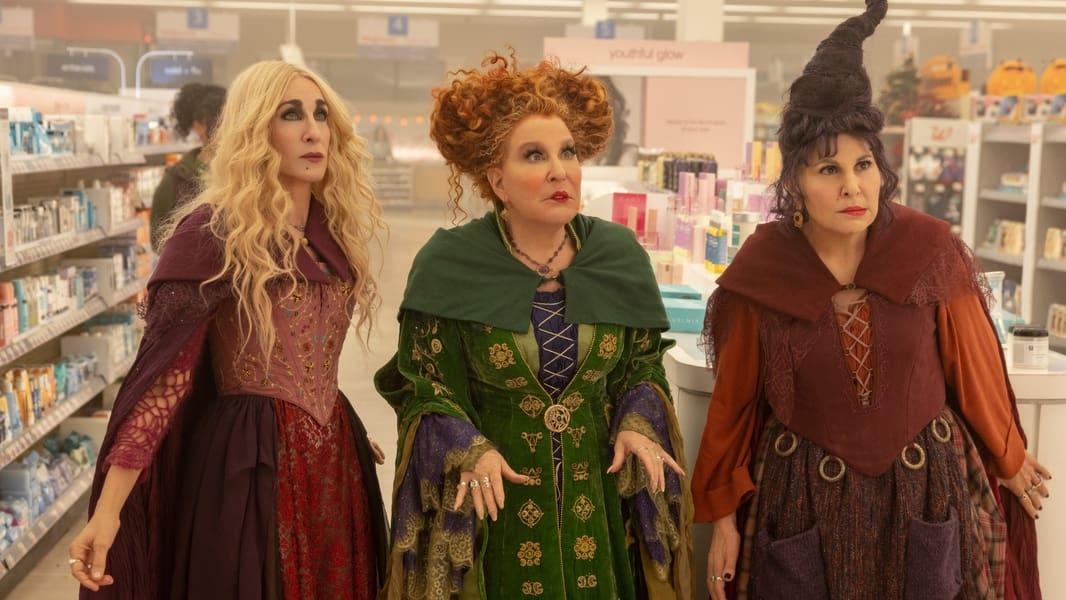 Hocus Pocus 2 was filmed exclusively in Rhode Island at location like Atwells Avenue and Pitman Street in Providence, Newman Congregational Church and Lakeside-Carpenter Congregational Church, Eisenhower Park, Colony House and Wilbour-Ellery House on Touro Street in Newport. Filming started in September 2021, and wrapped at the end of January 2022.

Even the sound stage was brought to Rhode Island, with the production taking over the Cranston Street Armory in Providence. It was one of the first locations announced, with green screen and stunt sequences making use of the building’s vast drill hall.

This all marks a change from the 1993 movie, which was filmed in Salem, Massachusetts, and LA. You can find all the original Hocus Pocus filming locations in detail here - including Thackery’s village, the Dennison house, the ballroom and deleted scenes.

We think Bette Midler, Kathy Najimy and Sarah Jessica Parker filmed all their scenes within California for the first movie. So while the move from MA to RI brings the locations further away from the real Salem, the Sanderson Sisters themselves are 3,000 miles closer than they were last time.

Hocus Pocus 2’s old Salem filming location was custom built in Chase Farm in Lincoln, Rhode Island. It sits on the edge of Lincoln Woods State Park, in Rhode Island’s historic Blackstone Valley. As confirmed by the trailer, Chase Farm’s Salem set was used for flashbacks of the Sanderson Sisters as children.

The Salem set was one of the first signs of progress on the Disney sequel. Locals were quick to spot the colonial village going up in the Rhode Island park. Passers-by and local photographers managed to catch a few snaps of Hocus Pocus 2’s Salem under construction, for the curious.

The Hocus Pocus 2 pharmacy location is the Pitman Street Walgreens. Locals spotted filming in progress in late 2021, and anyone who missed out can now visit the witchy Walgreens. Rhode Island Monthly recognised and confirmed the local store immediately as the Walgreens on Pitman Street.

The scene makes a nice reference to a lost grocery store scene from the original movie. It was featured in early trailers, with those snippets since seen in extras featurettes, but has never been recovered in full.

We haven’t managed to track down the location for the Hocus Pocus deleted grocery store scene, but here’s what we do know!

The pharmacy exterior is actually a separate Walgreens in Providence.

Atwells Avenue. I, Infrogmation, CC BY 2.5
The Roomba flying scene was filmed over Providence’s Atwells Avenue, where we catch a glimpse of a different Walgreens. Filming took place outside the 333 Atwells Avenue pharmacy in December 2021.

The store advertises ‘Walgreens welcomes you to Historic Salem’ for its onscreen moment. Providence Now ABC6 caught footage of the neighbourhood’s Salem makeover in progress, including that Walgreens entrance.

Later on, Providence residents were lucky enough to catch the Sanderson Sisters flying overhead as part of the shoot. WPRI 12 News caught the shoot in progress, complete with lighting and smoke machines.

Hocus Pocus 2’s Odd Meter Coffee Company location was set up specially, advertising pumpkin spice lattes near the Salem Scare Fest and Walgreens exterior. The Halloween festival scenes were filmed on the other side of the junction with Acorn Avenue (the movie’s Gibbet Lane). An empty unit became the coffee shop, complete with an autumn menu. You can see it in the scene where the partygoers dance down the street.

So you can’t visit, though you can find cafes in this part of Providence. Traditionally known as an Italian neighbourhood, Atwell’s Avenue is lined with cafes, restaurants and local hangouts.

However, you can find the Odd Meter Coffee Company in the real Salem, MA! It’s at 60 Washington Street, just around the corner from several of the original Hocus Pocus locations. So this isn’t just generic set dressing, it’s actually a contemporary Salem landmark. 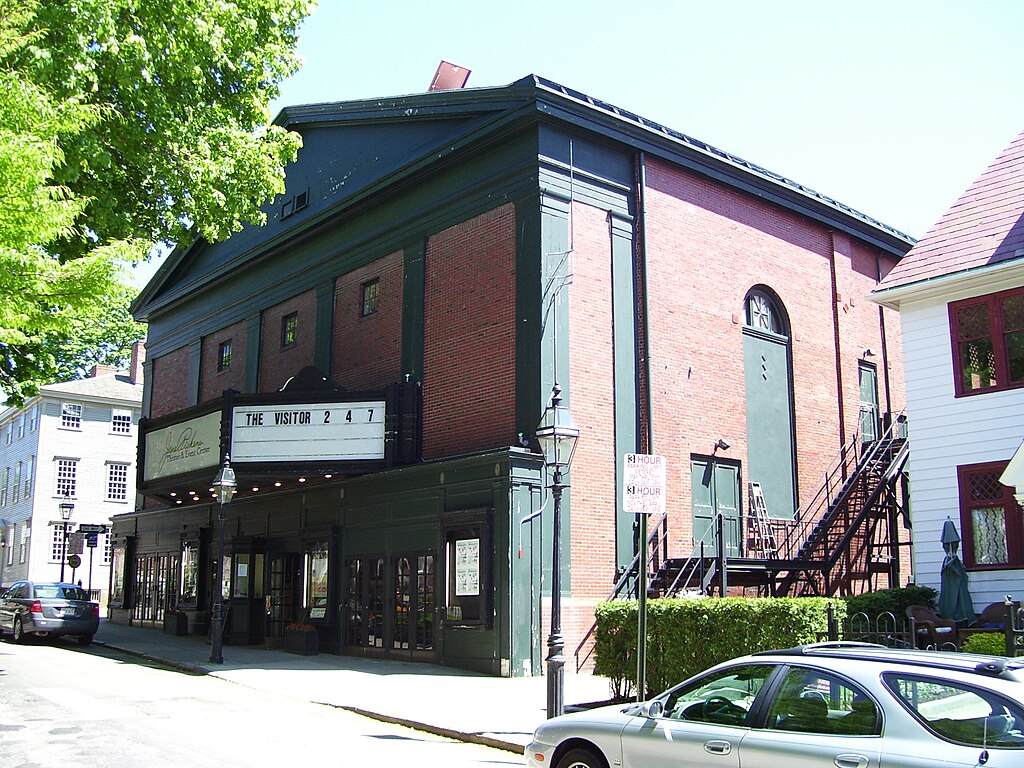 Locals caught the art house cinema’s Salem signage, including posters for the Salem Scare Fest Halloween Movie Week. Salem residents can look forward to Bela Lugosi as Dracula and The Creature from the Black Lagoon!

It turns out the venue was only too happy to move from showing films to featuring in one:

“As a historic cinema showing movies for over 100 years, it seems fitting to be right at the center of a Hollywood movie… We are thrilled to be involved in a small way.”
Alex Whitney, Manager of Jane Pickens Theater and Events Center

Gilbert’s magic shop in Hocus Pocus 2 was built on Touro Street in Newport. The Newport Daily News caught the work in progress, as the magic shop went up on a square of ground beside a historic building.

With the distinctive rickety exterior and waterwheel on the side, it’s close to the original Sanderson house we saw in Hocus Pocus. But this time it’s been relocated closer to the centre of Salem.

The real building next door is the Wilbour-Ellery House, which was built in the early 1800s. It’s one of several historic properties around Newport that have been restored over the past decades.

The Gilbert the Great Ghost Trolley is seen in several locations, including running uphill on Touro Street. It passes the Sanderson house/magic shop in the direction of the Wilbour-Ellery House and Jane Pickens Theater. We see the trolley car around several locations, mostly near Touro Street and Washington Square.

Newman Congregational Church confirmed their screen appearance with a glimpse of the church filming location in the trailer. We first see it in Billy Butcherson’s grave scene, which was filmed in the cemetery adjacent to the building.

The Lakeside-Carpenter Cemetery in Rumford is the new Salem Cemetery location in Hocus Pocus 2. Billy Butcherson (Doug Jones) and his distinctive gravestone are seen the location’s big moment. In the scene, Gilbert (Sam Richardson) digs at Billy’s grave before hearing cries from the “good zombie”.

Carpenter Cemetery dates back to 1844, with two neighbouring historic cemeteries date back to the 1890s. Meanwhile, the Newman Congregational Church and Newman Cemetery seen in the background date back over 350 years.

The Disney Plus movie’s cemetery replaces a combination of studio set and Marblehead, MA filming locations.

Eisenhower Park is at the heart of Washington Square, part of the old colonial town centre. And for one weekend in November 2021, it stood in for the Salem Common area.

During the shoot, it played host to Salem Scare Fest’s stalls and food stands. Look out for a few in-jokes among the slogans, including ‘Dost Thou Comprehend?’.

Mayor Traske’s favourite stall, Sandy’s Candy Cauldron, was set up on Washington Square in Newport along with Apple-plectic apple bobbing.

The pun-loving outlets found around Washington Square include ‘Salem BOO-Tique’, ‘Count Quack-Ula’, ‘Lifestyles of the Witch and Famous’ and ‘Sandy’s Candy Cauldron’.

Local business owners, residents and media were on hand to watch the Sanderson Sisters turn their neighbourhood into Salem for the weekend. WPRI 12 News caught up with the Providence Salem Scarefest location as the production team set up for a series of night shoots.

Hocus Pocus 2’s concert scene was filmed in front of the 1739 Colony House in Newport, Rhode Island. In the scene, the Sanderson Sisters sing One Way or Another on a specially constructed stage in front of the Colonial-era building.

The Salem Scare Fest stage scene serves as a big reminder of I Put a Spell on You in Hocus Pocus back in 1993. The open-air scene recreates the atmosphere of the adults’ Halloween party at the town hall in the original movie. Of course, the Sanderson Sisters get to sing two songs in Hocus Pocus 2.

Elton John and Bernie Taupin’s hit has been given a family friendly, and slightly spooky, makeover as The (W)itch is Back. Debbie Harry and Nigel Harrison’s Blondie anthem One Way or Another was also given an update for the movie. Both songs were reimagined by Marc Shaiman, the music producer who reworked I Put a Spell on You for Bette Midler in the 1993 film.

The Newport Colony House in Hocus Pocus 2 sits on Thames Street, on the edge of Washington Square. Of course, more Salem Scare Fest scenes were filmed just across the square.

It was built back in 1739, and was originally a government building. These days, you can of course see the exterior as seen in the movie – and you can also tour it to find out about life in the Sanderson Sisters’ era! 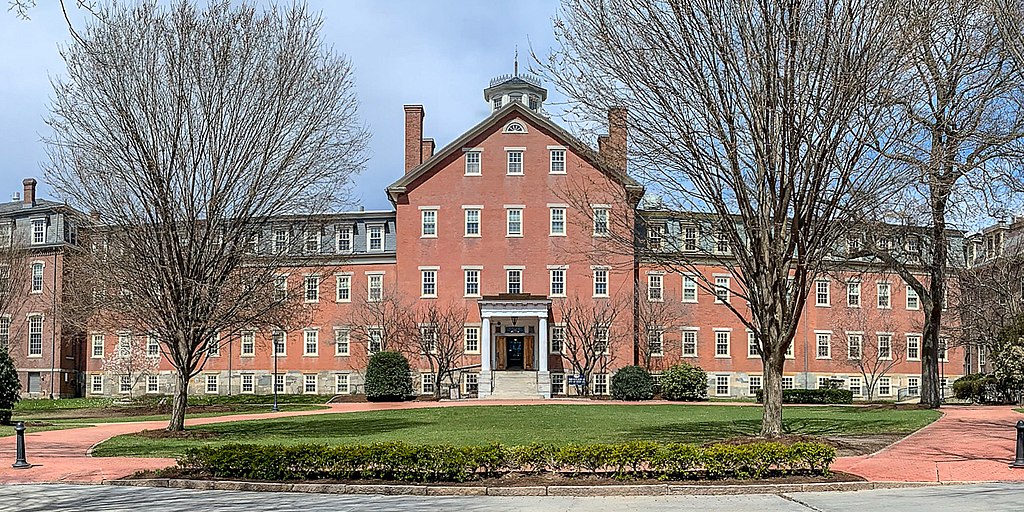 Moses Brown School. Kenneth C. Zirkel, CC BY-SA 4.0
Hocus Pocus 2’s Samuel Skelton High School location is Moses Brown School on Providence’s Lloyd Avenue. It’s a Quaker day school in Providence, Rhode Island, and it made an early appearance in the teaser trailer. Look out for the scenes of Becca, Izzy and Cassie beside the bike racks and walking through the school grounds.

In real life, Moses Brown School isn’t quite as old as the Sanderson Sisters. But its history isn’t too shabby either – it dates back to 1784.

Of course, a few updates were needed to complete the Salem theme. Watch for posters proclaiming Skelton High School as the ‘Home of the Fighting Puritans’ school football team.

Filming also took place at Providence’s La Salle Academy in October 2021. The academy is a private Catholic school, and once again locals were quick to spot set dressing, crew and extras milling around the historic building.