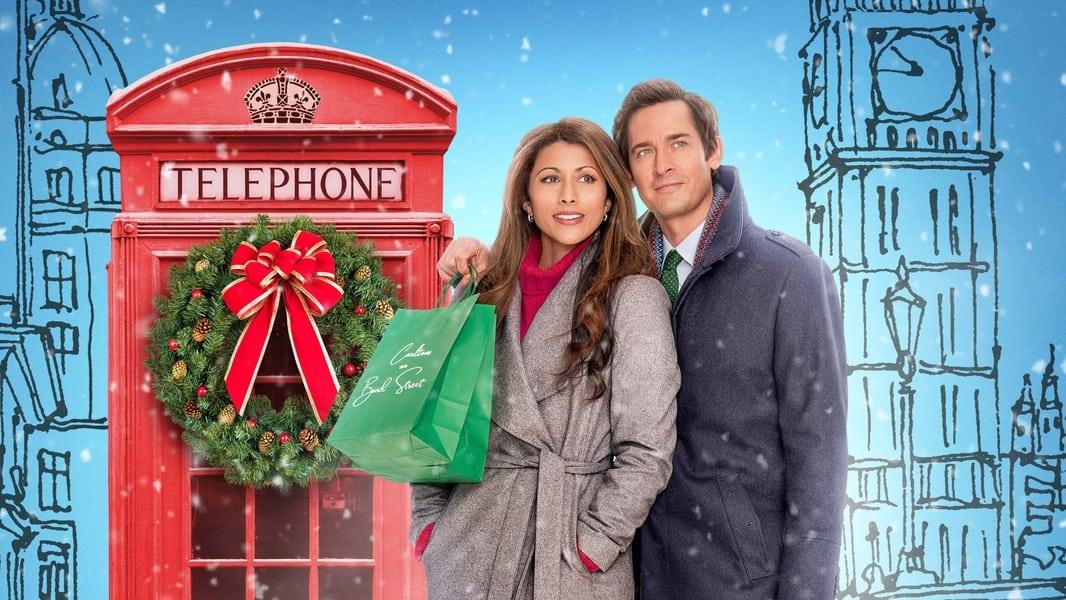 In the Hallmark Christmas movie Jolly Good Christmas, Anji (Reshma Shetty) is a personal shopper in London. Architect David (Will Kemp) bumps into her in Carltons on Bond Street, then again on the bus as she carries an oversized teddy bear for a client.

At first he thinks she might help him win over his girlfriend Charlotte (Sophie Hopkins) – but are Anji and David better matched? The pair hit a few complications along the way, including a run-in or two with David’s boss, Simon (James Faulkner), who happens to be Charlotte’s dad.

Where Was Jolly Good Christmas Filmed?

Hallmark’s Jolly Good Christmas was filmed in London at the Shard, Old Bailey, Waterloo Place and Jermyn Street in St James’s, the Landmark Hotel, Somerset House, and Little Venice. It’s packed with real London locations, including some of the must-see landmarks you expect to see along with some newer additions and local haunts.

The cast features a UK and international cast – though their accents don’t give the game away. Leading lady Reshma Shetty lives in New York, while her opposite number Will Kemp is a native Brit. In any case, they both enjoyed filming a London-set Christmas movie.

“What’s so lovely about shooting in London is that you are reminded how beautiful London can be at Christmas time.”
Will Kemp, David

And it’s true that Jolly Good Christmas highlights the city’s finest Christmas elements, even if they’re recreated with a Hallmark twist. For example, Somerset House typically hosts an ice rink – here we see it as the home of a Victorian-themed outdoor concert and an elf race. But the setting and festive spirit is all there – and the mix of locations adds to the authentic London atmosphere.

“there’s just something about the vibe of any city, right?... And I feel like that is just typical of what one would imagine London is like.”
Reshma Shetty, Anji 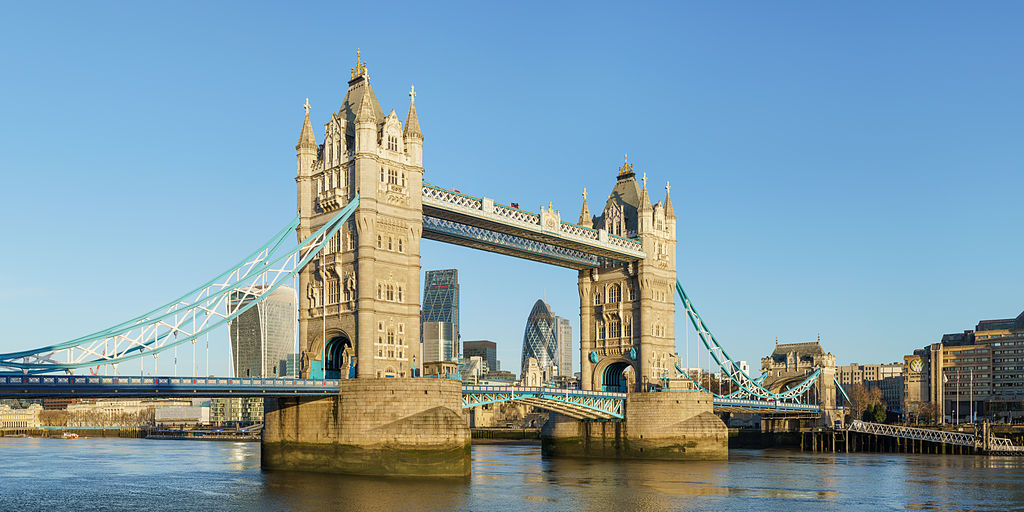 The real Carlton’s exterior location in Hallmark’s Jolly Good Christmas is the Imperial Treasure Fine Chinese Cuisine restaurant on Waterloo Place. It’s situated in St James’s to the south of Piccadilly, where it’s surrounded by private member’s clubs and diplomatic buildings. The real Bond Street is to the north of Piccadilly and is famous for its upmarket boutiques – as depicted in the TV movie.

At the start of Jolly Good Christmas David runs for the bus at the corner of Regent Street St James’s, Waterloo Place and Charles II Street. This is in fact the corner of the Carlton’s department store location – so he really hasn’t got very far with his journey at this point.

You can just see the number 94 bus to Acton Green in the shot. Though he probably shouldn’t catch this precise bus, as it terminates at Charles II Street. Let’s hope it’s about to commence the return journey, which would indeed carry David and Anji up Regent Street… as we’re about to see onscreen. 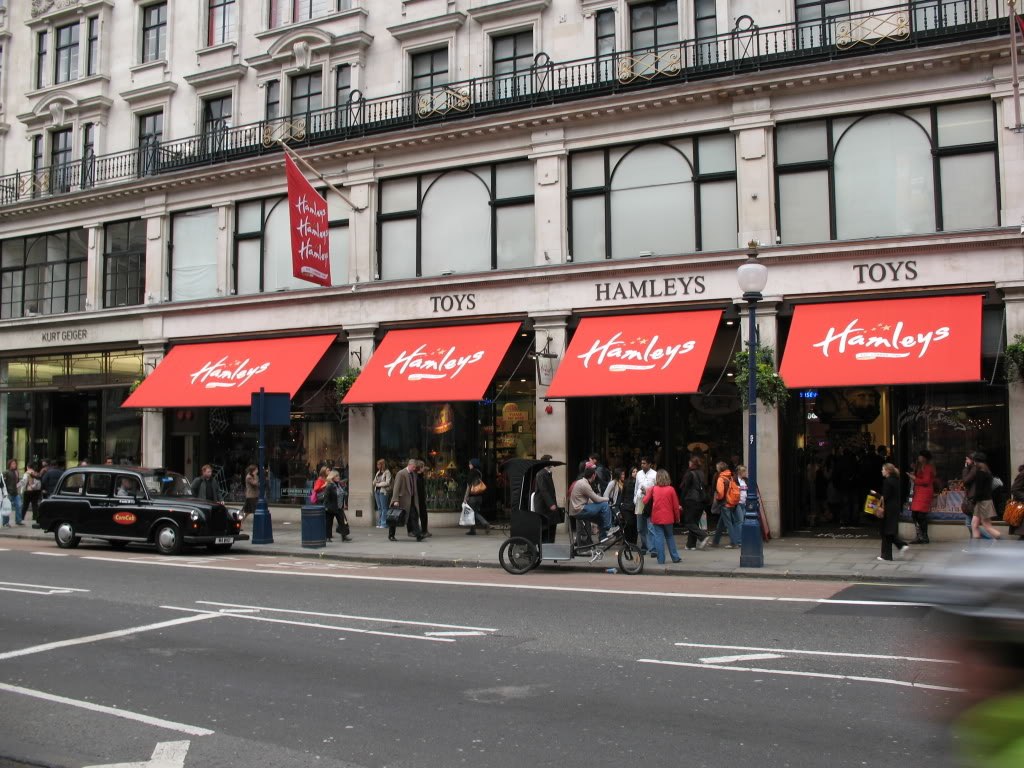 Hamleys, Regent Street, W1 by Phillip Perry, CC BY-SA 2.0
Look out for Regent Street and Hamleys during the bus journey scene, as Anji and David’s bus travels north. Anji may have bought the giant teddy bear at the fictional department store, Carltons, but Hamleys is London’s go-to to emporium in real life.

David, Charlotte and Simon’s office locations in Jolly Good Christmas are the Shard and Barings at 20 Old Bailey. The Shard is used for exterior shots of the architecture practice, and
You can visit the Shard and take in the skyscraper’s 360 degree views of London by booking The View experience. If you’re brave and don’t mind heights, you can go even higher – the Skydeck goes one better with an open air viewing platform.

Will Kemp talked about the experience of filming around London with TV Fanatic earlier in 2022. He mentions the Old Bailey location – it’s an office building in the City of London.

Did you see Southwark Cathedral in Hallmark’s Jolly Good Christmas? It appears in several shots of David’s office. This Anglican cathedral once stood at the City of London’s only entrance south of the Thames, and the river’s only crossing point.

If it doesn’t look like a cathedral at first glance, that may be because it wasn’t designed as one. St Saviour’s Church was only granted the title of Southwark Cathedral in 1905, after serving the community in various ways for a millennium.

After David and Anji’s second trip to Carlton’s goes wrong, they talk on the street outside the department store. They’re on London’s Piccadilly opposite the Royal Academy and Burlington Arcade, close to Fortnum and Mason and Hatchards bookshop. 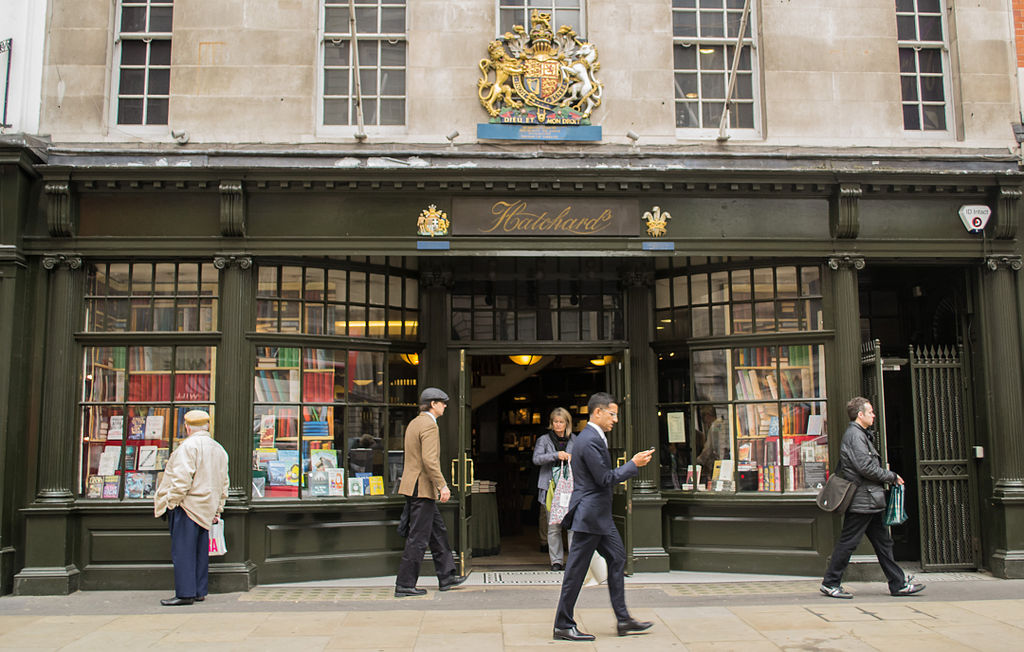 Hatchards, London. Joao rafael BR, CC BY-SA 3.0
Anji and David run away from the store manager on Piccadilly at the start of Jolly Good Christmas’s chase scene. They’re seen running past several stores including one with an unusual wooden shopfront.

This shop is Hatchards Bookshop, now owned by Waterstones – and it’s the oldest bookshop in London. Hatchards was founded in 1797 and has held royal warrants for centuries. In fact, the five-storey bookshop’s first royal customers were Queen Charlotte and King George III.

The archway David and Anji run through belongs to Somerset House, and this leads them to the elf scene’s location.

In Jolly Good Christmas the Great Christmas Pudding Race scene takes place in Somerset House. In the scene, Anji and David disguise themselves as elves to hide after a misunderstanding with the manager of Carltons.

The Victorian carol singers are in the central courtyard of Somerset House too, despite the quick shot of Trafalgar Square. Though it’s not far away – you could walk between both locations in a matter of minutes.

You can’t miss Big Ben in Jolly Good Christmas – now known as Elizabeth Tower. The iconic London landmark is the clock that Anji and David look as when they realise they’re late.

Of course, you would be unlikely to see the clockface from within the walls of Somerset House on the Strand. They’re a twenty minute walk apart, but the Hallmark movie’s not a million miles off with this one.

When Anji helps David with his Christmas shopping mission, Jolly Good Christmas features more St James’s locations. You might think this is the real Bond Street – after all, they walk past Taylor of Old Bond Street. In fact, the men’s toiletry emporium is location on Jermyn Street which runs parallel to Piccadilly. 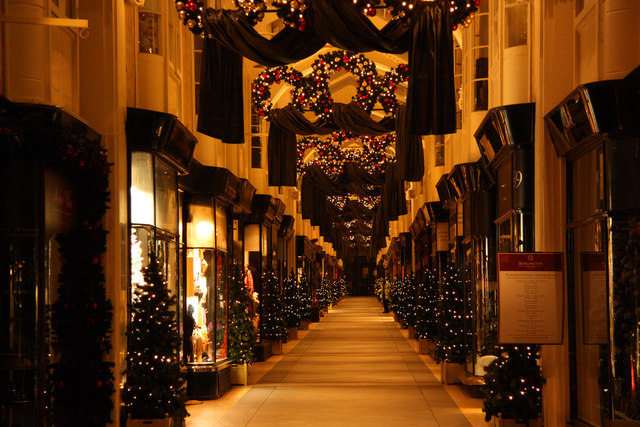 Burlington Arcade by Richard Croft, CC BY-SA 2.0
They make their way back through Burlington Arcade when Anji takes David to the specialist shop. It’s famed for speciality shops and bespoke goods, so this is not a bad choice for their shopping mission. Well done, Anji!

David talks on the phone on the Queen’s Walk near Tower Bridge in Jolly Good Christmas. He’s just a few steps away from City Hall, and is walking in the direction of the Shard and Southwark Cathedral.

The Queen’s Walk is a functional pedestrian route but it’s also part of a scenic route that takes you past some of London’s most famous sites. Apart from the Tower of London, tower Bridge and City Hall, it takes walkers to St Paul’s Cathedral in the City of London, and the Globe Theatre and Tate Modern art gallery on the South Bank.

In Jolly Good Christmas, David is seen leaving his friends’ smart London townhouse location in Warrington Crescent in London. In the scene, he dresses in a tuxedo before setting off for the upscale Christmas party.

Warrington Crescent runs from Maida Vale down to Warwick venue tube station and Little Venice. It’s a short distance north from Marylebone and Paddington, and is named for its canal network. In fact, you can usually find narrowboats travelling through it or moored at Paddington Basin.

The black tie Christmas party in Jolly Good Christmas is held at The Landmark London. It’s a real hotel at 222 Marylebone Road in Westminster, boasting an eight-storey atrium at its heart.

In the Hallmark movie, we get to see some of The Landmark London’s features. Later in the scene, David and Charlotte argue at the foot of the grand staircase, surrounded by the hotel’s exotic palm trees.