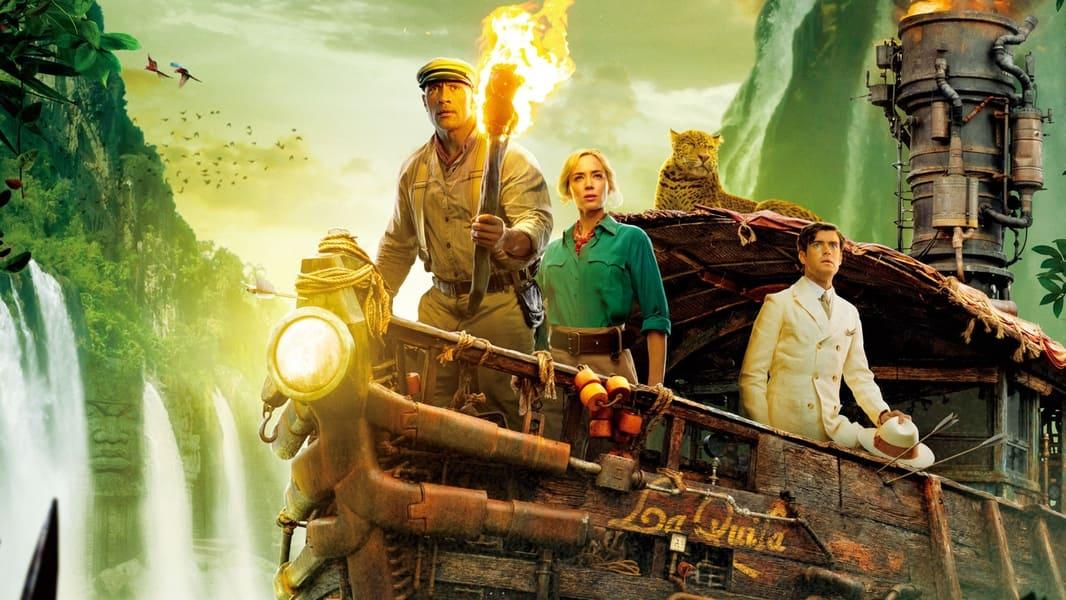 Jungle Cruise filming locations in Kauai, Hawaii and studios in Atlanta, Georgia bring the Amazon Rainforest to our screens. With a few Anaheim additions, just for fun.

The movie is based on the classic Disney ride, as launched by Uncle Walt himself back in 1955. The ride itself took inspiration from the classic movie The African Queen – with a few clever nods making their way to the Anaheim attraction, as revealed in Behind the Attraction on Disney+.

And of course, it’s now inspired a movie of its own. Though for many European fans, this could be their first encounter with the iconic voyage – Jungle Cruise is absent from Disneyland Paris.

Dr. Lily Houghton (Blunt) enlists steamboat skipper Frank Wolff (Johnson) for a Pirates of the Caribbean-esque quest to find the Tree of Life. With Lily’s brother MacGregor Houghton (Jack Whitehall) in tow and a rival explorer on their trail, they set off on La Quila. And of course, the journey is filled with tropical backdrops and silly quips – essential elements of the Disneyland ride.

The Jungle Cruise movie is set in Porto Belo, Brazil in 1916, so visually you can expect a departure from Adventureland, which takes inspiration from jungles of the world. Though in fact, none of the filming took place in South America. Instead, Hawaiian scenery and Atlanta studios magic up the jungle atmosphere.

Where Was Jungle Cruise Filmed? 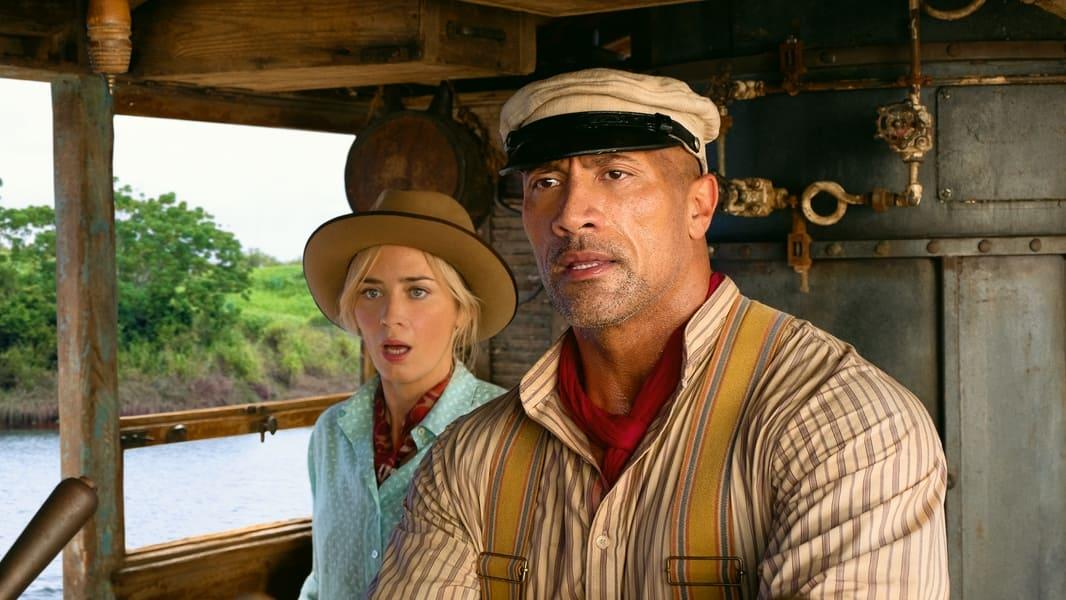 Disney’s Jungle Cruise was filmed in Kauai, Hawaii with the entire Porto Belo docks created in detail around a reservoir, plus Blackhall Studios in Atlanta, Georgia. Filming took place back in 2018, with the Adventureland-themed movie hitting screens just in time to coincide with the ride’s retheme.

And in fact, as the Los Angeles Times discovered, the movie turned out to be a much-needed route to the refresh.

“From our talks with the Imagineers, what was so interesting is that they’ve been wanting to redo the ride for a long time... it’s the most revered, and the most nostalgic, and no one would let them. Every generation wanted the same experience. So the Imagineers were like, ‘Thank God for this movie, because it gives the opportunity to make changes we’ve wanted to make.’”Beau Flynn, Producer

The Rock has filmed other family-friendly adventure movies in Hawaii in the past. Jumanji: Welcome to the Jungle was filmed at several locations around Oahu including the Judd Trail in Nu’uanu Valley, Kapena Falls, and Waimea Valley.

Another movie based on a Disneyland ride was filmed on the Kualoa Ranch. The Pirates of the Caribbean franchise shot scenes at the popular filmmaking destination on Honolulu, the next island east of Kauai.

But Kauai itself is actually already a Disney filming location. Lilo and Stitch was set on the North Coast, converting the scenery to animation cells with watercolour. And other Disneyland rides can also claim a Kauai connection.

The Society opens out into a Blackhall Studios set. The society’s supposed location in Jungle Cruise is Piccadilly Circus in London, complete with nods to the Eros statue and billboards. And of course, Lily’s spectacular exit leads us closer to that all-important river cruise...

Wailua Falls (via Wikimedia Commons)
The Porto Belo location in Jungle Cruise is in Kauai, with filming taking place around Lihue. The island’s scenery is stunning onscreen, but to bring 2018 Hawaii closer to 1916 Brazil, Disney made a few additions to recreate the Amazon Rainforest.

Sitting on the edge of the Kailua River State Park, it’s near the scenic Wailua Falls – an area that’s had screen time of its own. The Wailua Falls are yet another Hawaiian filming location, this time from 1970s TV series Fantasy Island (scheduled for a 2021 reboot).

Look out for a secret Disneyland connection. The island’s Huleia River is an Indiana Jones filming location, appearing in Raider of the Lost Ark.

The Garden Island identified the exact location after locals spotted the set going up. And Reel News Hawaii tracked down a few shots of the work in progress, complete with the iconic River Cruise boats moored in situ.

Created by production designer Jean-Vincent Puzos, the foliage, shacks and docks recreate the Adventureland ride’s look with historical Brazil’s. Did it work? Well, this Jungle Cruise filming location certainly impressed one of the film’s stars.

“It's an incredible set. You combine this kind of set and this kind of story… [There’s] heart. It's universal. There's fun. There's adventure. And you know, there's a good lesson as well”Dwayne Johnson

And in case you’re wondering, several interiors were built on location - but others were created in Atlanta at Blackhall Studios. 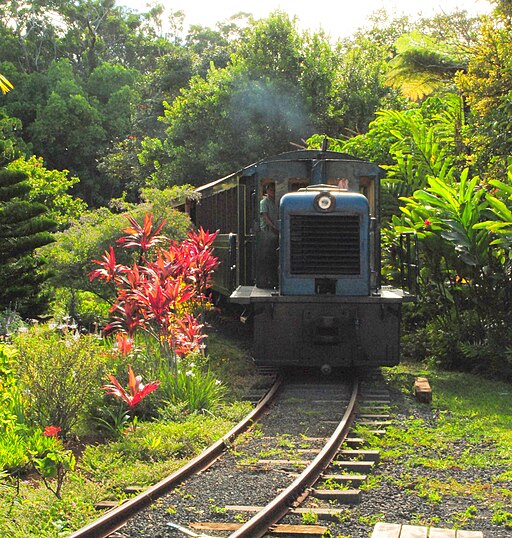 Jungle Cruise’s railway scenes were filmed at the Kauai Plantation Railway on the Kilohana Plantation. Lily and MacGregor’s arrival in Porto Belo were the last scenes to be filmed on the island before production moved to Blackhall Studios in Georgia. Reel News Hawaii captured the Jungle Cruise railway station location - take a closer look at those posters up close!

You can visit this location from the movie, and even ride a train on the same line through the former sugar plantation. It’s now home to gardens, orchards and luaus.

The location for Ucayali Cove in Jungle Cruise is Opaekaa Falls, Kauai. You can make out the falls’ rock formations and foliage in shots of the boat mooring at the foot of the falls and MacGregor and Frank talking as they drink from flasks on the shore.

According to Go Hawaii, the name Opaekaa means ‘rolling shrimp’ referring to the plentiful supply of the shellfish that used to b found in the area. If so, someone should tell Frank and save his passengers from another piranha supper.