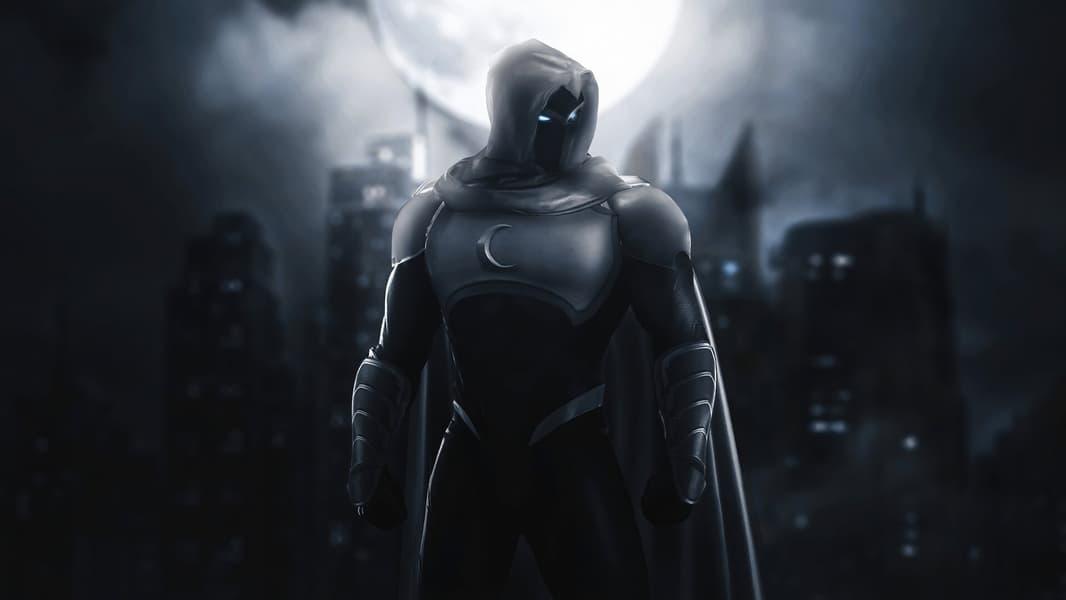 Moon Knight filming locations like Budapest’s Anker köz and Museum of Fine Arts, Szentendre and Wadi Rum give the Disney Plus MCU series its global backdrops. Look out for some closely matched substitutes for international locations along the way, and sets built at Pinewood Studios.

Steven Grant (Oscar Isaac) works in a museum gift shop, living through multiple identities including second life as Marc Spector, when he becomes the living incarnation of an Egyptian god, the Moon Knight. Arthur Harrow (Ethan Hawke), a follower of the goddess Ammit, appears on the scene with an agenda of his own.

Where Was Moon Knight Filmed? 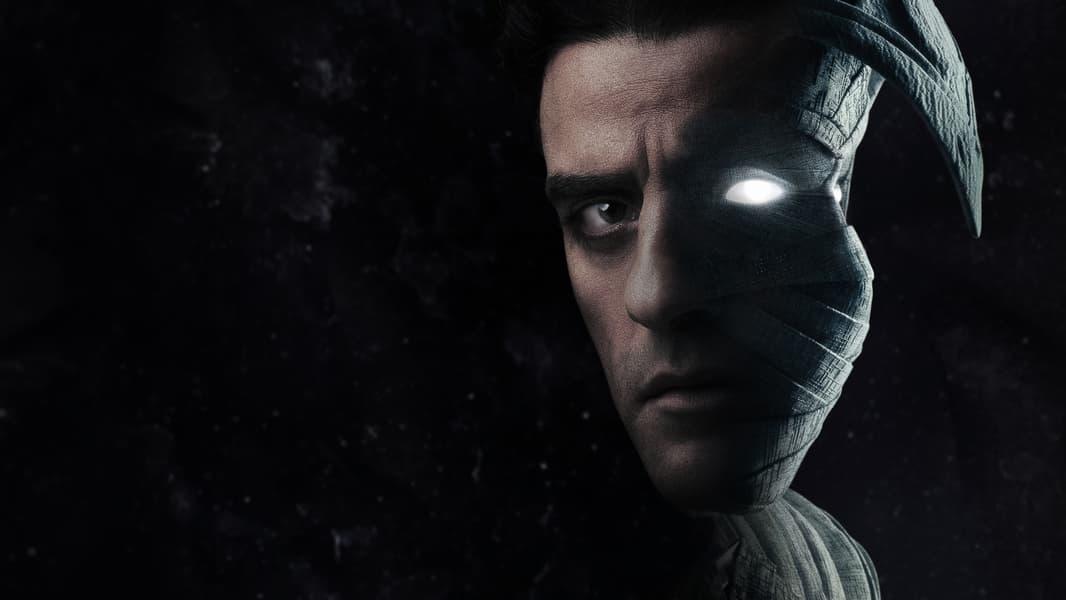 Moon Knight
Moon Knight was filmed in the desert landscape of Wadi Rum, several locations in Hungary including Anker köz and Madách Imre tér in Budapest, and the town square in Szentendre, Pest County.

Moon Knight was scheduled to film at Pinewood Studios in Buckinghamshire but later the shoot was pushed back and relocated to Pinewood’s Atlanta studios.

Director Mohamed Diab was determined to present modern Egypt, and Egyptian history, with authenticity, even when there’s a bit of screen magic making it happen.

“It's part of the show because it's part of the comic book. It's part of how he gets his powers. It's ingrained in it… There was definitely room to play but keep it as authentic as possible in the realm of being fantastical. Even in the original comic books they did a great job of researching and trying to make Egypt authentic.”
Mohamed Diab, Director

All the same, be ready to spot a few clever substitutes for the real locations. And look out for some confusing London routes, though MCU fans will be used to this after Thor’s infamous journey from Charing Cross to Greenwich in Thor: The Dark World. 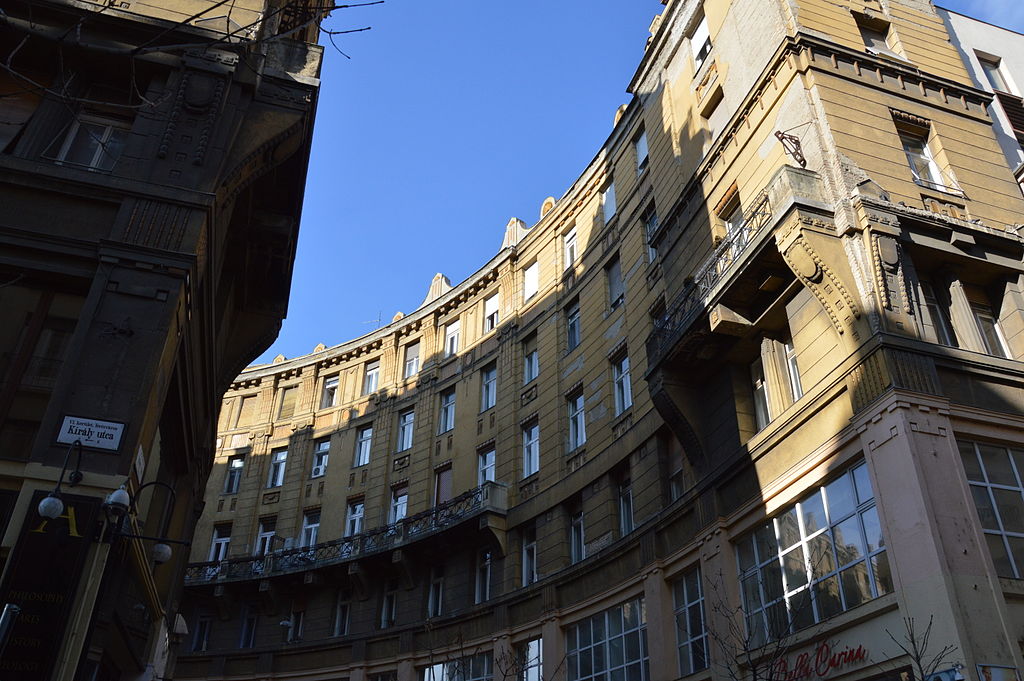 Anker köz. Illustratedjc, CC BY-SA 3.0
The opening scene was filmed at Anker köz in Budapest, which links up with Király Street to form a popular shopping and restaurant district. It runs around the back of the Anker Palace apartments that have been called ‘Budapest’s Times Square’.

But of course, it mimics the corner of Bloomsbury Way and Museum Street. No big surprises here, Museum Street is close to the British Museum which Steven’s museum is heavily inspired by – and there’s another Hungarian location waiting for us there...

The London square in Moon Knight is Madách Imre tér, around a block away from Anker köz. The historically protected area is at the corner of Károly Avenue and Király Street, in the same neighbourhood.

Ethan Hawke and Oscar Isaac shot at the Budapest location in 2021, and the scene appears in the night sequence in the second half of Episode 1. We think it looks convincingly like a City of London square, at least for the moments it’s onscreen.

Mysteriously, the main doors open onto another Moon Night filming location in London, Trafalgar Square. Back in the real world, this is the view from the entrance to the National Gallery.

Szentendre. The original uploader was Mkesmarki at Hungarian Wikipedia., CC BY-SA 3.0 , via Wikimedia Commons
We think the German town Steven teleports to in Episode 1 is Szentendre in Pest County. The village square is Szentendedre’s own Fő tér with the usual signage covered over with generic German language shop names.

Szentendre is well known for its beautifully preserved streets (it’s recognised for its living heritage) and its open air museum.

If you’ve seen Netflix’s Shadow and Bone, you might recognise it from the Ravka scenes.

Kiscelli Museum. Vadaro, Public domain, via Wikimedia Commons
We think the filming location for Harrow’s headquarters is the Kiscelli Museum in Budapest. The ‘evil magician’s man cave’, as Steven calls it, appears in Episode 2 before he attempts to summon the Moon Knight suit.

This location is a former church and monastery in the historic Obuda area of Budapest, with the Baroque building now housing contemporary art.

You can visit it in real life, if you want to visit the kind of architecture seen onscreen in Moon Knight and check out history and visual arts at the same time.

After the getaway from Harrow’s HQ, we see a bit of CGI assistance in blending London backdrops with Budapest streets. Look out for the Tower of London at the end of the sequence, followed by a nice view of the Houses of Parliament from across the River Thames. 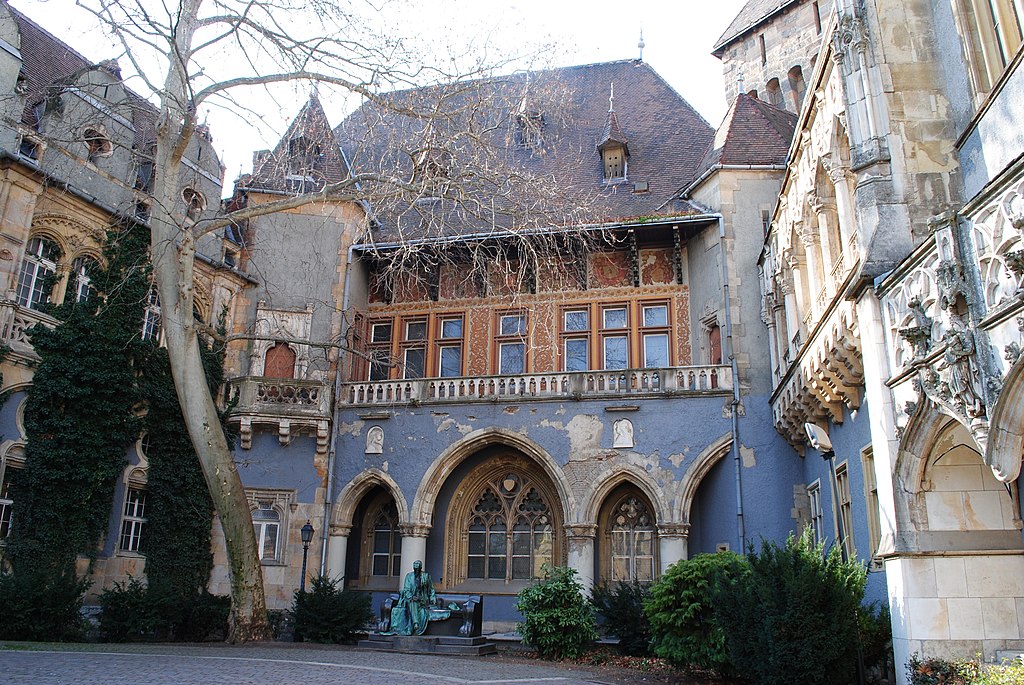 Vajdahunyad Castle. Marek Mróz, CC BY-SA 4.0
In Episode 2 of Moon Knight the church courtyard location with the pyramid at the centre is Vajdahunyad Castle - once know as the King of Castles. You can’t miss its distinctive Gothic architecture in the scene, which dates back to the 14th and 15th Centuries. Though in fact, this is an elegant copy built at the end of the 19th Century, showcasing notable architectural styles from several castles across the wider region.

Moon Knight’s castle filming location in Budapest comes at one of the Disney Plus series’ spookiest moments up to this point, and it’s an ideal place for it. The Romanian castle that inspired part of Vajdahunyad in Budapest one held Vlad the Impaler as a prisoner and is thought to be the inspiration for Dracula’s castle.

But in fact, this castle complex in Budapest is home to the Museum of Agriculture and you can happily visit without any Gothic goings-on beyond the building’s signature features.

We think Moon Knight’s Egypt scenes were filmed in Jordan’s Wadi Rum. This was the last filming location used for the Disney Plus series before it wrapped at the end of 2021. Disney already has a relationship with Jordan, with the Star Wars franchise and live action Aladdin movie previously shooting scenes in the Wadi Rum desert.

Also known as the Valley of the Moon, Wadi Rum Village sits in a dramatic landscape of dules, rock formations and ancient carvings. It’s relatively close to Petra, home of The Treasury or Al-Khazneh – the mausoleum used as the Holy Grail temple in Indiana Jones and the Last Crusade.

Watch this space for more details as the series unfolds on Disney Plus!