Rocketman Filming Locations: Pinner and Beyond 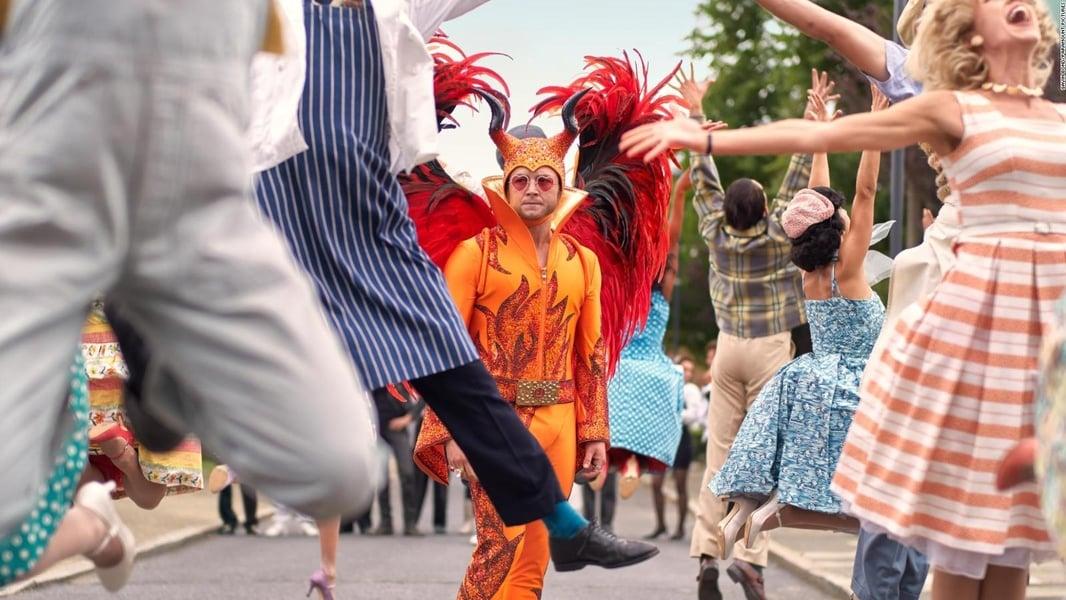 Rocketman filming locations from Pinner to Potters Bar brought Elton John’s biopic to the screen – without leaving the Home Counties.

Where Was Rocketman Filmed?

Rocketman was filmed in Amersham, Potters Bar and Pinner – however glamorous the musical sequences, this British movie stayed close to home. Other scenes were filmed at Pinewood Studios, and ambitious sets were constructed at Bray Studios.

Hammer Horror titles like Dracula and The Mummy were filmed at Berkshire’s Bray Studios. The Rocky Horror Picture Show was made there in the 1970s, followed by Gerry Anderson’s Terrahawks in the 80s, making it a cult favourite.

The studio’s future has been uncertain in recent years, so the decision to film Rocketman at Bray was significant. And as far as the production was concerned, it was close to a blank canvas. They built everything from Elton’s jet to an LA nightclub there.

And since it’s a movie about Elton John, there’s another piece of the location puzzle to look out for. Rocketman’s pianos were supplied by Yamaha, who have provided the singer with pianos for years – including the glorious silver piano in the Dodgers Stadium scene and Elton John’s 9-foot concert piano.

Elton John’s house in Rocketman is a reasonably accurate version of his real childhood home. The singer grew up on Pinner Hill Road, in North West London.

Unfortunately the 1950s front room and kitchen aren’t behind any of the doors on that cul-de-sac, but the production design team did incorporate some real blasts from the past.

“There’s no way we could have shot in a house so small as the real life semi-detached house, but of course we were influenced by the overall feel… so we made it bigger and took the core of a post war, suburban house. We used a subdued palette but made it visually appealing.”
Marcus Rowland, Production Designer

Interiors were built at Bray Studios and decorated with painstakingly sourced authentic wallpaper that’s survived for over half a century. Vintage units were given fresh worktops to make them look newer – because of course, they weren’t vintage in the 1950s.

The Royal Academy of Music 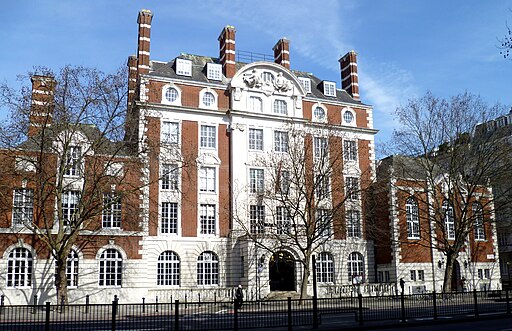 Royal Academy of Music. Philafrenzy [CC BY (https://creativecommons.org/licenses/by/2.0)]
The Royal Academy of Music scenes in Rocketman were filmed at the school in Marylebone. And in a deleted scene shot at the location, Elton pushes back against his classical training.

These days, the singer embraces his prestigious former music school. He has even embarked on fundraising projects for facilities, such as putting on a concert to raise money for facilities.

Elton’s local gig merges into a funfair scene, and the showground may not be real but the rides are. Vintage funfair rides were supplied by screen regulars Carters Steam Fair, who brought in restored post-War rides for the scene.

“They are fantastic. They renovated some 1950s dodgems for us.”
Jude Farr, Set Decorator

Carters Steam Fair is based in Berkshire, not far from Bray Studios. If you’re lucky, you can catch the fair on tour to try out the rides for yourself. 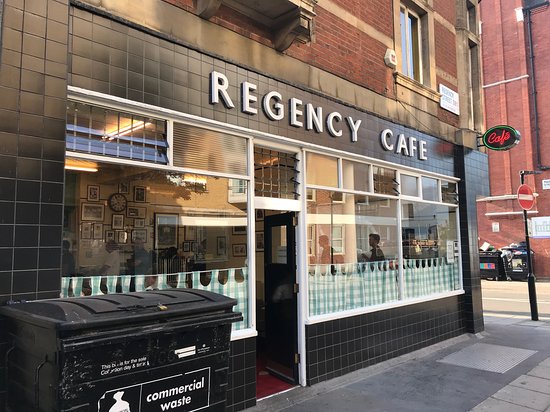 This photo of Regency Cafe is courtesy of TripAdvisor
The Lancaster Grill Café scene where Elton and Bernie meet was filmed at the Regency Café in Westminster’s Regency Street.

It’s supposed to be on Tottenham Court Road, just around the corner from Denmark Street. At the time it was at the centre of the London music industry, home to record labels, managers and studios.

The filming location for Elton and his new writing partner, Bernie Taupin’s flat share is a residential street in Camden.

Camden Terrace in North London was used for the street scenes, along with the front steps of one of the terraces houses. It appears just after the duo meet at the café and start making plans.

Rocketman’s Troubadour scene, with its memorable Crocodile Rock sequence, was filmed in the car park at Bray Studios. It was built by the production team for the purpose, and filled with found and custom-made furniture to recreate the iconic venue.

The real club has stood in West Hollywood since the 1950s, with Elton John making his LA debut at the Toubadour in 1970. On the night, Neil Diamond introduced the up-and-coming English rocker.

He was following in the footsteps of Joni Mitchell, Neil Young and the Byrds, who all played at Santa Monica Boulevard club on their way up.

Mama Cass’ cabin location in Rocketman is closer to the Home Counties than Californian canyons. Incredibly, the Rocketman team built the wooden home from scratch near a stately home in Buckinghamshire.

“We digitally stripped in L.A. so you see the lights in the distance when you see the car arriving with Elton, and luck was on their side as the sun came out for filming… Even when the crew arrived they said “who lives here normally?””
Jude Farr, Set Decorator

Times changed across the course of the next decade. But when John Reid and Elton John arrived, Mama Cass’ house in Laurel Canyon was at the centre of the LA music scene.

It’s in the Hollywood Hill, just five minutes away from Sunset Boulevard and ten minutes from the Troubadour where Elton John played his breakthrough performance in 1970.

The Laurel Canyon filming location actually has its own Elton John connection. Shardeloes, near Amersham, is the birthplace of lyricist Tim Rice.

Fans of stage and screen musical might remember that John and Rice collaborated on the soundtrack to Disney’s The Lion King in the early 90s.

Tim Rice’s family didn’t own this stately home though – it was a maternity hospital at the time. But if you’re quick, a piece of Shardeloes could be yours. The Grade-I listed property has been repurposed and divided into apartments.

Like Mama Cass’ Laurel Canyon home, you wouldn’t guess that this glamorous Californian retreat was actually just outside London.

The weather came to the rescue with LA-worthy sun. The crew had to supply their own palm trees to make the pool look the part.

It’s not just the exterior that appears onscreen. Interior shots of Elton’s LA home were filmed at the Potters Bar property too, with a few accessories to make it look the part.

The only additional filming took place at Pinewood’s Underwater Stage, for the scene where Elton drops into the pool. 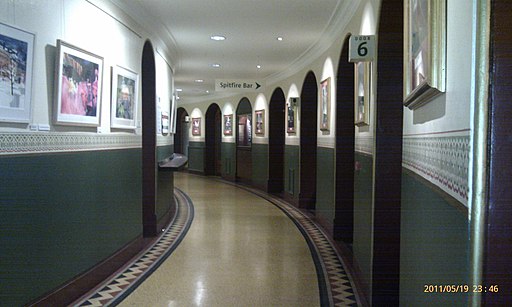 We only see the concert hall briefly, but the sequence is an important one, showing a darker side of Elton and John’s troubled relationship.

And of course, it’s easy to visit this filming location. Cinema-lovers might want to check out the Royal Albert Hall’s Films in Concert series for an even more movie-themed experience.

In Rocketman, Elton John’s wedding scene was filmed in England – thought they really married on the other side of the world.

You’d be forgiven for being surprised by this turn of events. It’s a detail of the singer’s life that’s not often discussed.

“When you take a lot of drugs, and you’re out to lunch half the time. . . you think a change of scenery, I’ll get another house, I’ll move to another country.”
Elton John

And that’s precisely what he did. Elton and Renate Blauel got married at Darling Point in Sydney in 1984.

John Reid served as best man, while Australian stars Olivia Newton-John and John McEnroe were among the guests.

You may have seen St Mark’s Church in Darling Point onscreen. It wasn’t used for Rocketman, but it does play a role in an Australian favourite. St Mark’s is the church location from Muriel’s Wedding.

Musical director Giles Martin’s father had produced the Beatles’ records at Abbey Road, and Martin himself produced the latest reissues. His links to the studio gave him a feeling for the studio’s spaces and the artists who use them.

“You’re thinking, ‘Who can I get to play piano that plays like Elton?’"
he recalled.
"And I bump into this man called Dave Hartley in the corridor, who I know really well. You can start having these conversations.”
Giles Martin, Musical Director

So at the heart of it all, Abbey Road was the perfect place to record the Rocketman soundtrack because it’s a musical hub. It’s the place to be to bring musical connections together.

The filming location for Elton and his new wife Renate’s stately home is Hertfordshire’s Brocket Hall. In reality, the house was Elton John’s mansion in Old Windsor.

Reportedly, the scene where the couple come out of separate bedroom doors is rumoured to be based on their real situation, keeping to separate rooms in the stately home.

The singer bought Woodside in Old Windsor in 1975, and still lives there. These days, it’s a family home shared with husband David Furnish and the couple’s sons.

He’s decorated the mansion as a typical English country house (though a few flamboyant touches have sneaked in). So it’s only fitting for Woodside’s Rocketman filming location to be a classic English mansion.

Hertfordshire’s Brocket Hall was used for Taron Egerton’s Old Windsor scenes. You can see the distinctive gold-painted staircase and arches onscreen, along with several rooms around the hall.

Grade-I listed Brocket Hall is a popular filming location that’s appeared in Spider-Man: Far From Home, Grantchester and The Queen. Not to mention Pride and Prejudice, Johnny English: Reborn and an Eastenders special – remember Ronnie Mitchell’s wedding to Jack Branning?

You can book afternoon tea or even an overnight stay at this Rocketman filming location.

The rehab scenes were filmed at Pinewood Studios in Iver. Bernie finds Elton on a bench in front of Heatherden Hall, the grand Victorian manor where the studios were founded.

For obvious reasons, the mansion’s grounds have appeared in plenty of movies since Pinewood Studios opened in the 1930s.

Heatherden has popped up in everything from the Bond movies to Mary Poppins Returns and Chitty Chitty Bang Bang as well as another Taron Egerton movie. Pinewood’s mansion was used as an Eddie the Eagle filming location in the sports biopic.