Save the Cinema Filming Locations: A Real Carmarthenshire Story 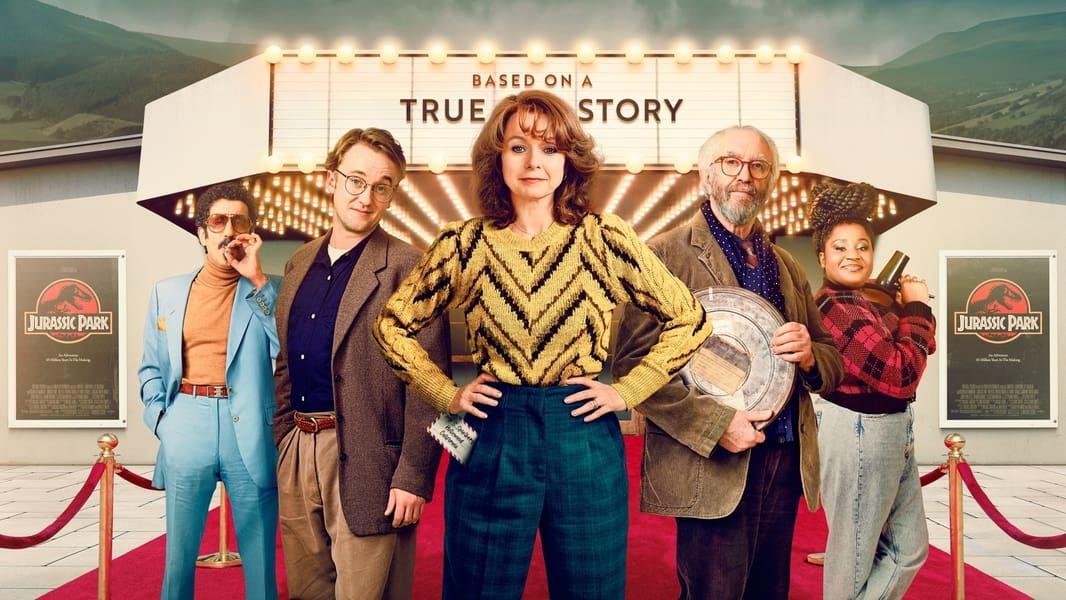 Sky Cinema’s Save the Cinema filming locations include the real Lyric Theatre and King Street in Carmarthen, Ammanford, Laugharne and Llandeilo. The film brings the 1990s back to Carmarthen and the unlikely Jurassic Park premiere.

But the newest member of the council, postman Richard Goodridge (Tom Felton), soon becomes a supporter of the theatre and its community. In a wonderful turn of events, they attract the Welsh premiere of Jurassic Park to the Carmarthen Lyric.

Where Was Save the Cinema Filmed? 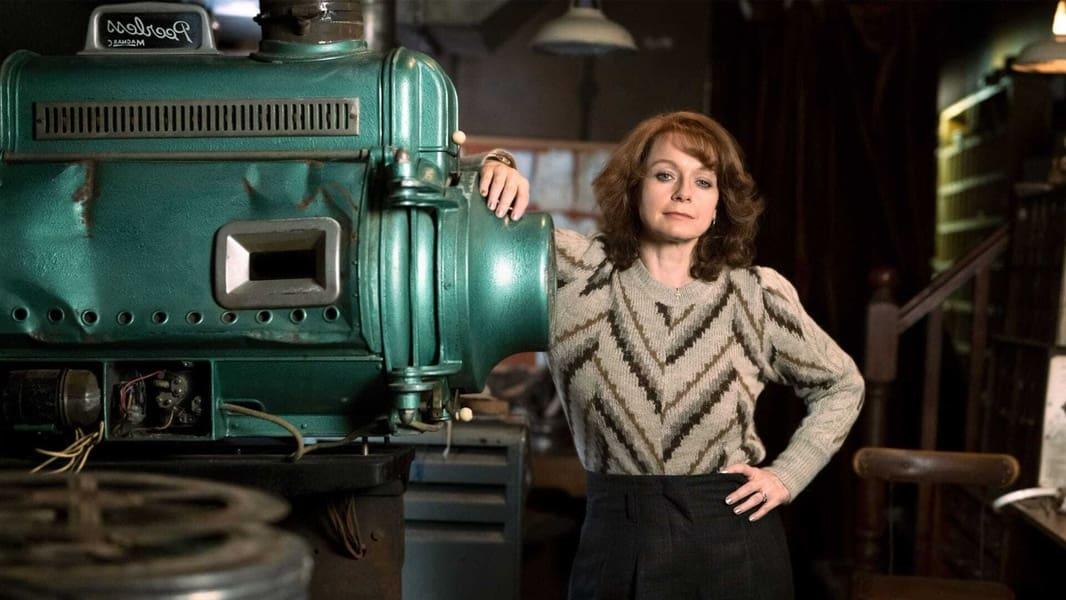 The cinema from Save the Cinema is the actual Carmarthen Lyric Theatre on King Street where the movie’s unbelievable events took place. It all started with a local hair salon, the Lyric Theatre and Carmarthen’s The Queens pub. Wales Online shared the real story behind the movie and it’s as inspirational as it appears in the film version.

“Mum used to run a hair salon in Waterloo Terrace in Carmarthen, and it was there that she heard one day that the Lyric was going to be knocked down… She ended up paying a pound a year to the council, which meant that they basically had someone running the building for them for nothing. In return she was able to use it as a home for the local youth opera group and she’d be there every day putting on films.”
Mark Llewelyn Evans

The very real Carmarthen and District Youth Opera put on its first musical in 1979, and actually did perform Oliver the following year. Of course, the musical is mentioned in Save the Cinema as the screen version of Liz Evans coached the youth group.

Carmarthen Youth Opera moved into its home at the Lyric in the late 1980s, with Elizabeth Evans MBE driving the group and leading the cinema and theatre space’s refurbishment. Today, her sons are part of the opera world – Mark Llwelyn Evans and Wynne Evans, voice and face of Go Compare.

The Scissors ‘n Combs hair salon location in Save the Cinema is King Street, where Liz and Dolly are seen at work and making plans. The interior was custom built elsewhere in Carmarthen – with the help of locals.

Production designer Jonathan Houlding set up his workshop at the University of Wales Trinity St David’s Carmarthen Campus after one of the university’s lecturers suggested using their space. He and two Design and Production graduates ended up working on the project. 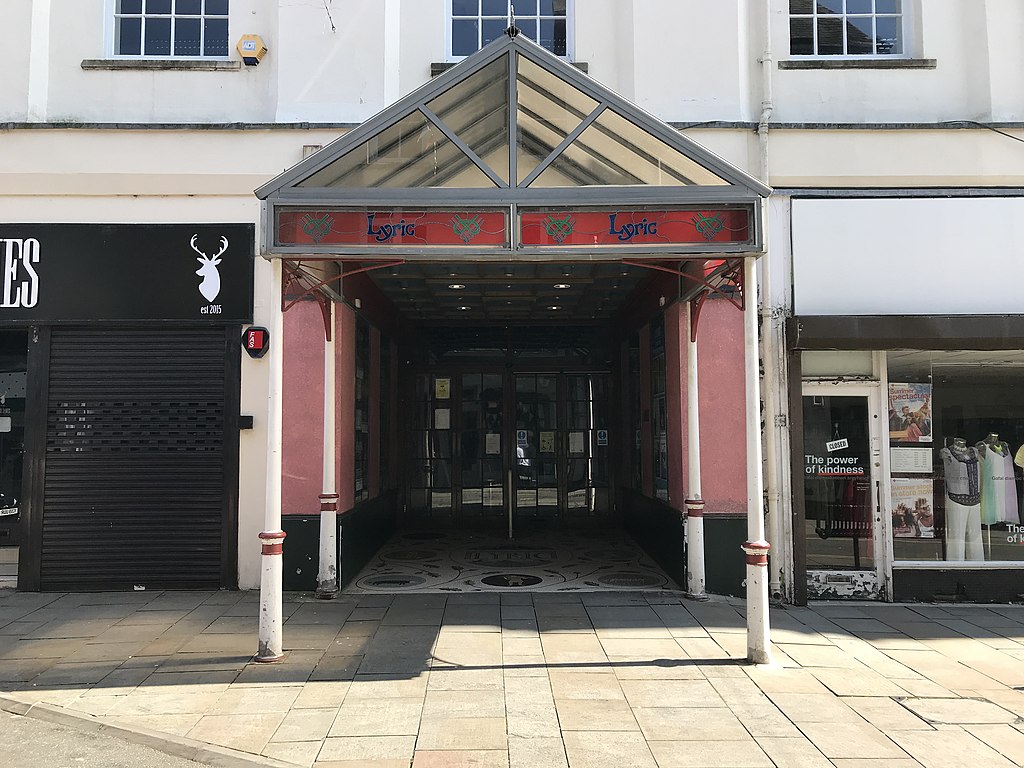 Lyric Theatre. Hywel72, CC BY-SA 3.0
Save the Cinema’s filming location is the real Lyric Theatre in Carmarthen, where the real events took place back in the 1993. Today it’s run by Theatrau Sir Gar under Carmarthenshire County Council’s Leisure department umbrella – and it’s still a working venue. Look out for film screenings and local theatre productions at the venue!

The theatre entrance with its distinctive mosaic floor is on King Street. The Sky movie took the units adjacent to the Lyric into the 90s, bringing video rental shops and decades-old signage to the street.

John Lord / Ammanford Town Hall
Save the Cinema town hall office scenes were filmed at Ammanford Town Hall on Iscennan Road. Filming took place at the town hall in February 2021, as reported in the South Wales Guardian at the time. In the movie, we first see the councillors’ offices when newcomer Richard meets the Mayor to discuss his new role as a councillor.

Exterior shots were filmed at a different site, Carmarthenshire Council's offices in Spilman Street which is just around the corner from the Lyric Theatre.

We think the councillors’ party location in Save the Cinema is Carmarthen Golf Club and Driving Range. The clubhouse and restaurant look out over the rolling landscapes you can see in the background.

In the Save the Cinema scene, Richard Goodridge is welcomed to the council at the party. We see the councillors discussing their plans for Carmarthen.

Colourful houses above Llandeilo bridge by Flying Stag, CC BY-SA 2.0
New councillor Richard’s post route scenes were filmed in Llandeilo, Carmarthenshire. Look out for local roads including Bank Terrace as we see Tom Felton’s Save the Cinema character in his day job as a postman.

The water you can see in the distance is the River Tywi, also known as the River Towy. Winding from the Cambrian Mountains to Carmarthen Bay, it’s the longest river flowing entirely through Wales.

Just off to the side of the screen, you can see the rolling landscape of the National Nature Reserve at Dynefwr. If you’re interested in mythology, this is a part to take note of – it’s home to the mythical Lady of the Lake.