Duncan McAvoy shows her around the West Highlands, takes her on a tour of his new whisky distillery Christmas Spirit, and introduces her to Scottish traditions.

Where Was Saving Christmas Spirit Filmed?

Saving Christmas Spirit was filmed in Fort William’s Cameron Square and The Parade, Ardnamurchan, the Glenfinnan Viaduct and Loch Shiel in the Scottish Highlands. Most of the locations are in Lochaber, showing off town and country settings.

Edina and Duncan’s tales of selkies and spirits are based on real Scottish mythology. There are plenty of real Highland filming locations in the Christmas movie – and we’ve taken a look at a couple of the places that are name-checked too.

It’s best known as the route of the Hogwarts Express from the Harry Potter films. Visitors can walk the surrounding countryside, or travel over the top of the viaduct on the Jacobite steam train.

We think the distillery location from Saving Christmas Spirit is the Ardnamurchan Distillery in Argyll.

In the TV movie, Lucy tours Duncan McAvoy’s Christmas Spirit Distillery and hears about Duncan’s plans for his venture. They walk past the casks and various machinery. 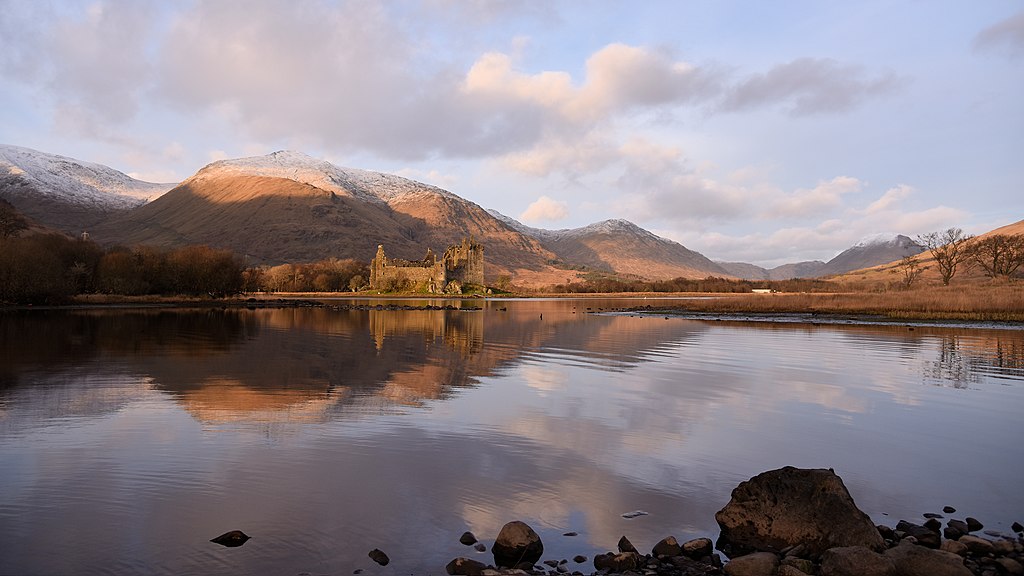 Loch Awe. Andrewmckie, CC BY-SA 4.0
The real Loch Awe is in Argyll, to the west of the Highlands. It’s known as the longest loch in Scotland, and is home to local sites like St Conan’s Kirk, a hundred-year-old church hidden in the forest.

The real Loch Shiel is a Saving Christmas Spirit filming location. Lucy and Duncan talk near the loch, by the Glenfinnan Viaduct which runs past its banks.

In the film, Duncan talks about selkies, who appear in the form of seals. They’re not particularly linked with Loch Shiel, but there are plenty of myths, legends and along the Scottish coastline, with many of their supposed stomping grounds in easy reach magical creatures bouncing around in the Highlands. You can find selkies, kelpies and Morag the monster of the movie’s setting.

The town in Saving Christmas Spirit is Fort William. You can see the shore along Loch Linnhe in establishing shots throughout the film, along with plenty of Lochaber scenery.

Fort William is surrounded by well-known Scottish natural landmarks. A few minutes’ driver to the east you’ll find Ben Nevis, Scotland and the UK’s highest mountain. Loch Level and Glencoe https://twitter.com/N_T_S/status/1590675686691598337 and are a short drive to the south, and Glenfinnan with its famous viaduct is about half an hour west.

The Parade, Fort William, Scotland by Elizabeth Thomsen, CC BY-SA 2.0
It looks like the Christmas market where Duncan and Lucy stop to taste whisky is on The Parade in Fort William. Duncansburgh Church is the Church of Scotland kirk that’s just visible in the background.

During the scene, Lucy tries whisky from one of the stalls before a bagpiper starts playing. Duncan persuades her to try ceilidh dancing in the market, before they return to the B and B.

Saving Christmas Spirit’s town square location is Cameron Square in Fort William. Look out for shots of Lucy and her friend outside the Garrison West pub later in the film, as they carry hot drinks past the entrance.

Edina talks about Sanquhar Castle and its ghosts. It’s a ruined 13th Century tower in Dumfries, quite a way south of Loch Awe. In fact, it’s well on the way to the Borders. But the good news for Edina is that her favourite spooky reference point really is linked to several hauntings!

One of the Scottish castle’s ghosts is said to be the spirit of a man killed in a dispute between local figures. The other appears as a white lady, and is thought to be Marion of Delpeddar, a woman who disappeared. Both are linked to the same landowner at the end of the 16th Century.

We think the reindeer in Saving Christmas Spirit belong to the Cairngorm Reindeer Herd.

They’re the only free-ranging reindeer herd in the Cairngorm mountains, and make regular appearances at Christmas events around the UK.