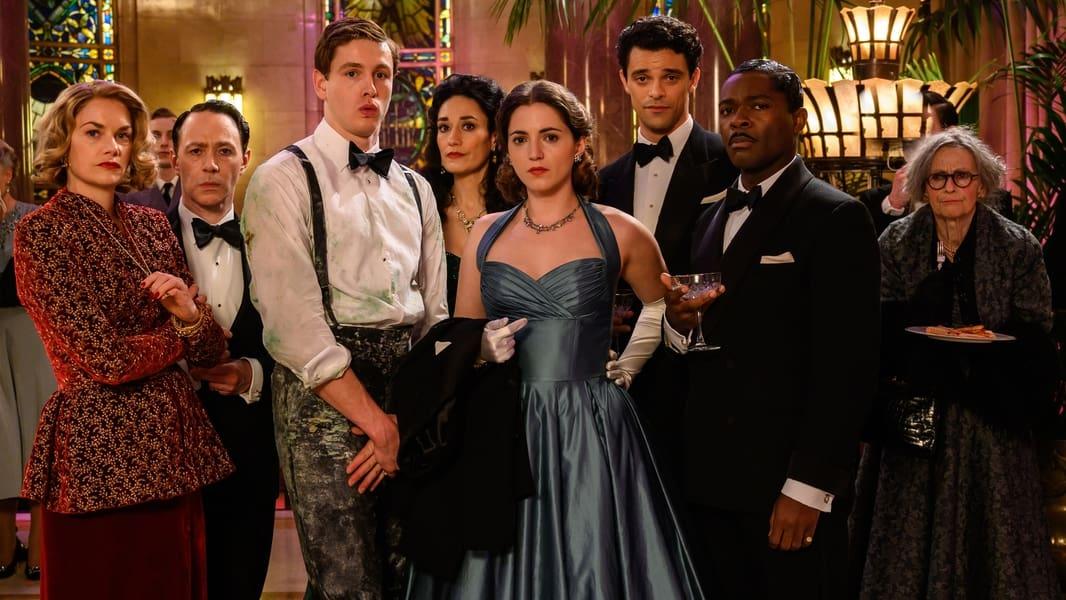 In the new Agatha Christie-inspired whodunnit, Inspector Stoppard (Sam Rockwell) and Constable Stalker (Saoirse Ronan) are called to a West End theatre to investigate a murder.

Hollywood producer (Adrien Brody) has met an untimely end backstage around the time of The Mousetrap’s 100th performance.

Where Was See How They Run Filmed? 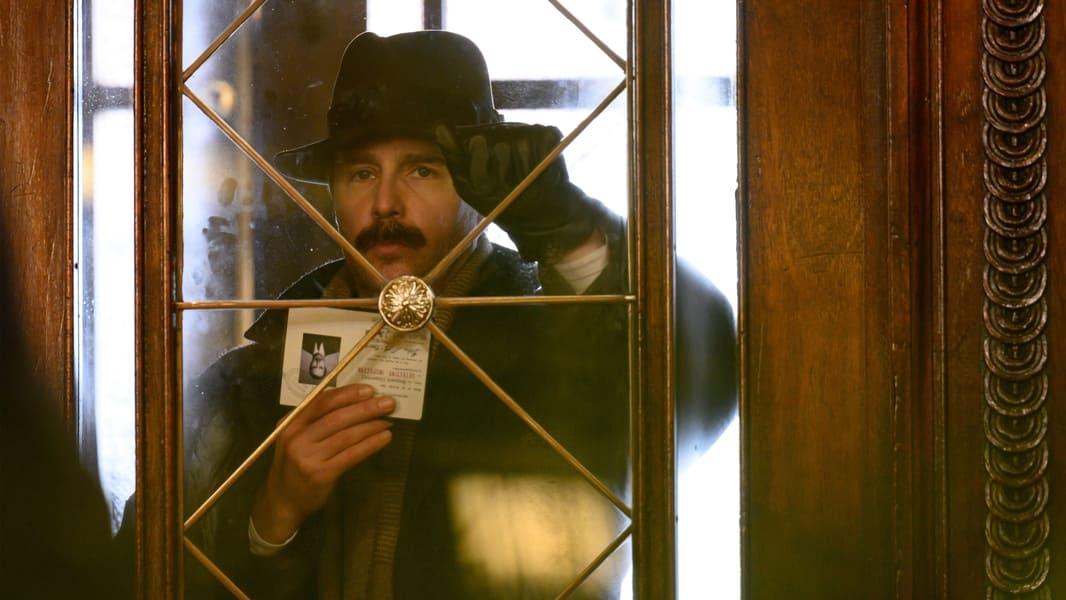 See How They Run was filmed across London’s Theatreland at the Dominion, St Martin’s Theatre and the Old Vic, the Savoy Hotel and Freemasons’ Hall with glimpses around Covent Garden.
While a large amount of the movie was shot on location, filming also took place at Twickenham Film Studios and ITV Studios Bovingdon.

Is See How They Run Based on a Play?

See How They Run is inspired by Agatha Christie’s The Mousetrap, but the film tells an original story. This is actually a clever workaround by setting the murder mystery backstage at The Mousetrap during the first years of its run.

The Mousetrap is the world’s longest-running play, and for decades audiences have respected the show’s request to keeps its secrets under wraps.

It’s a quintessential Agatha Christie country house whodunnit, with a group of guests trying to unravel the truth after one of the party is murdered. Is there a murderer among the guests of Monkswell Manor? There’s only one way to find out, and that’s to visit The Mousetrap in London’s Theatreland. 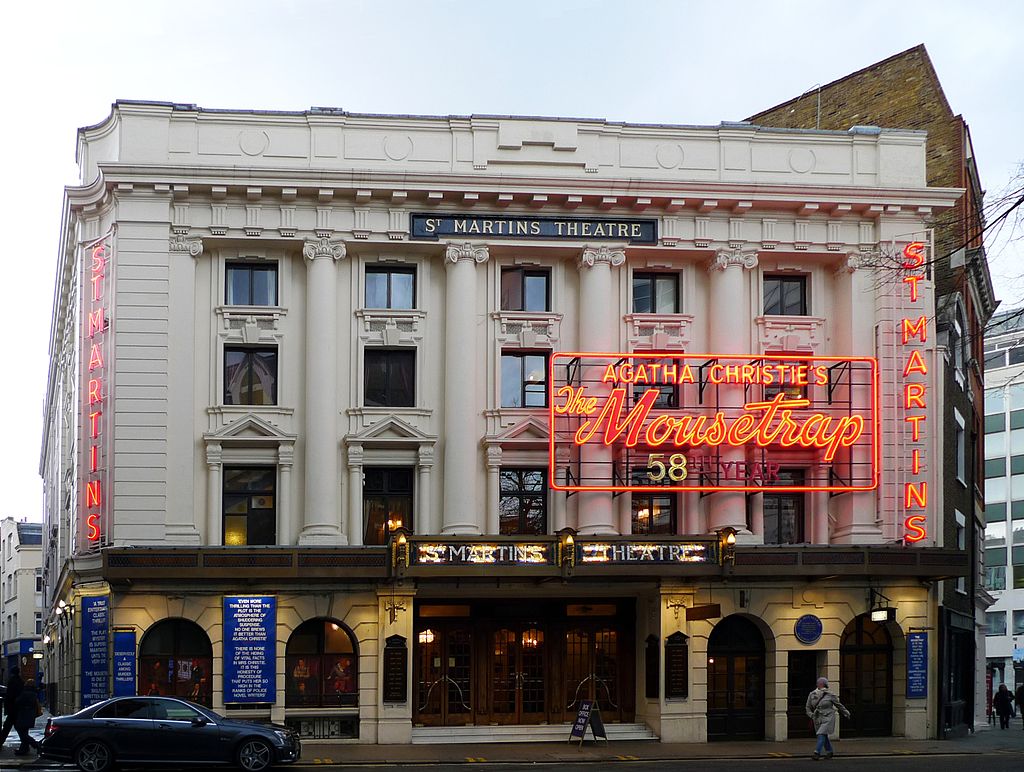 Exterior shots of the Ambassadors Theatre building in See How They Run were shot at the St Martin’s Theatre. It’s actually found just next door, and both theatres have a historic connection to The Mousetrap in real life.

See How They Run is set in 1953, which explains a detail about the film’s theatre setting. If you’ve been to see the play you might have been surprised to see the famous Agatha Christie play at The Ambassadors Theatre. It’s been a staple of the St Martin’s Theatre for years, but in wasn’t always housed there.

The Mousetrap began its record-breaking run at the Ambassadors Theatre in 1952 – the year of the Queen’s Coronation. In 1974, The Mousetrap transferred to the St Martin’s Theatre where it remains to this day.

St Martin’s Theatre and The Ambassadors Theatre were built as a pair by W. G. R. Sprague. With the Agatha Christie whodunnit proving popular year after year, the show upped sticks to the larger venue next door.

The exterior of the St Martin’s Theatre looks almost identical to its appearance in See How They Run. A billboard advertising ‘A Petula Clark Production… Starring Richard Attenborough’ stands in place of the usual The Mousetrap signage. And of course, the theatre’s name is changed for the film.

The stage and auditorium filming location in See How They Run is the Old Vic Theatre in London. Look out for the elegant lattice-like design that surrounds the grand circle and upper circle, and the ornate ceiling rose. These belong to the historic theatre, and might have stood out to fans of the real Agatha Christie play.

The Old Vic opened over 200 years ago as a music hall, even recovering after a ten-year break following a direct hit during the Blitz. See How they run was filmed in early 2021, and helped the theatre to make it through lockdown.

With theatres closed due to the third London lockdown, See How They Run was filmed across those empty auditoriums and backstage areas. Of course, the Old Vic was just one of these.

Freemasons Hall. User:Jack1956, CC0, via Wikimedia Commons
See How They Run’s theatre bar was filmed at the Freemasons’ Hall in London. A popular filming location in recent years, the vestibules recently appeared in Doctor Strange in the Multiverse of Madness.

For the mid-20th Century whodunnit, the Art Deco location was spot-on. It also offered up a swish setting for a weird and wonderful moment.

“I loved that we had to keep slot-testing the cake to ensure it had the right consistency. Members of the production crew would run up and splatter the cake to check that it looked just right. Covid was going on, but here we were methodically destroying cakes”
Amanda McArthur, Production Designer

The Museum of Freemasonry has put together a handy virtual tour, if you’re wondering what else is behind those doors.

The theatre foyer location in See How They Run is the Dominion Theatre on Tottenham Court Road. Shots of the foyer make it easy to recognise the Dominion’s stylish entrance hall. Look out for the fine banisters that run along the parallel staircases, and the carpet’s distinctive circular motif.

Specially for the production, the foyer walls advertise productions fitting the 1950s setting. Referencing the real history of The Mousetrap onstage, look out for posters promoting the opening cast. Among others, Richard Attenborough earns a reference as the original Detective Sergeant Trotter.

Though of course, the theatre is already brimming with 1930s style – perfect for any self-respecting Agatha Christie-inspired film.

The Dominion stands on the north side of the junction with Oxford Street, where it was built in 1929 on the site of a former brewery. It still holds onto the design style of its era, with its period details carrying over for 90 years.

For 12 years, it was home to the Queen musical, We Will Rock You. Before that, the Dominion hosted nights with the stars, film premieres, and of course musicals, including the original West End run of Disney’s Beauty and the Beast.

You won’t see the stage where I Want to Ride My Bicycle was performed in See How They Run though. The auditorium scenes were filmed at yet another West End theatre.

The Savoy Hotel. Loco Steve from Bromley , UK, CC BY-SA 2.0
The Savoy Hotel location in See How They Run is London’s real Savoy on the Strand. It appears as Stoppard and Stalker follow their investigation to the southern edge of Covent Garden. Look out for the decadent entrance area as they talk in the car.

“When someone writes in a script Savoy Hotel at the top of a scene, usually you don't get to film at the Savoy Hotel, you know. So we were just incredibly fortunate that they opened their doors to us and we were able to have the run of the place for a day or two.”
Tom George, Director

As travel and tourism ground to a halt, the film production took its pick of locations around the 5-star hotel. As a result, we see some great shots where of the real Savoy onscreen.