Bond screenwriters Neal Purvis and Robert Webb turn their attention from international espionage to crime solving closer to home for the BBC’s adaptation of the Len Deighton novel. In the world of SS-GB, the Nazis triumphed in World War II and 1940s London is controlled by Hitler's infamous Secret Service.

Life in an invaded Britain unfolds as we follow Scotland Yard detective Douglas Archer on a murder investigation, coming into contact with American journalist Barbara Barga and SS agent Oskar Huth as the plot thickens.

The ‘what if’ five-parter brings this dark vision closer to real life by filming much of the action on London’s streets, albeit with a good helping of CGI. 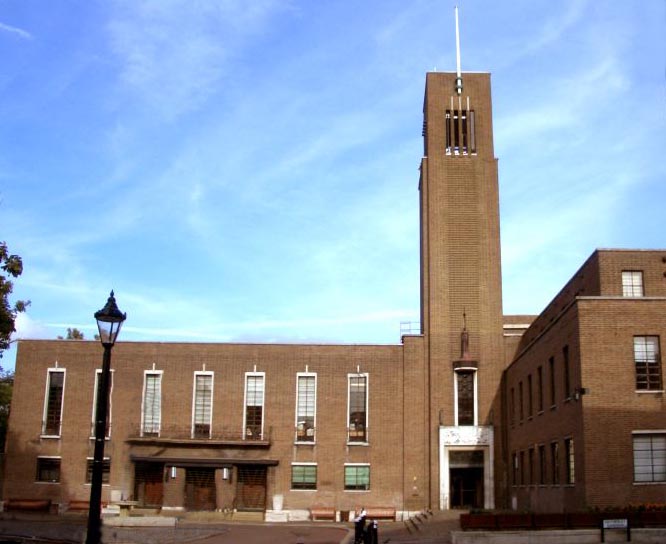 Hornsey Town Hall By User:Salimfadhley [GFDL (http://www.gnu.org/copyleft/fdl.html) or CC-BY-SA-3.0 (http://creativecommons.org/licenses/by-sa/3.0/)], via Wikimedia CommonsThe Mall with Buckingham Palace present as ever in the background, but now devastated by war, is one of the show’s most striking images. SS-GB really did film in the heart of London to capture the footage, adding the necessary changes later.

The Houses of Parliament were filmed from across the river, adding another unmistakeable view to this unnerving vision.

But the five-part drama also brings the story to neighbourhoods around the city centre, adding an extra touch of realism by filming in real building's and on real London streets.

Built in 1935, Old Hornsey Town Hall in Haringey exudes the distinctive look of the era inside and out, and the show takes full advantage of the building for interior and exterior shots. Look out for the building’s Art Deco balcony in a key scene.

SS-GB was fortunate to film at the hall after it had fallen out of permanent use, before a hotly contested change of use to a privately owned hotel and arts centre.

Farmiloe Building By Matt from London [CC BY 2.0 (http://creativecommons.org/licenses/by/2.0)], via Wikimedia CommonsMoving closer to the heart of the city, the series found another ideal filming location in Clerkenwell’s St John Street.

Hidden in plain sight around the corner from Smithfield Market, the Farmiloe Building’s labyrinth of empty rooms has appeared in television series like the location-loving Poirot and big hitter movies including Sherlock Holmes and The Dark Knight.

Its offices were transformed into Commission Gordon’s base in the Christopher Nolan Batman franchise. Guy Ritchie sent Holmes, Watson and Irene Adler into peril in an industrial hall within the Victorian glaziers’ factory.

SS-GB pushes the Farmiloe Building’s eerie industrial atmosphere to its limits, turning it into a detention centre. The scenes were filmed as far back as October 2015, when extras flooded the building and street outside.

If you’re in the area, you can easily identify the unlikely filming hotspot – the building’s name is carved into the façade at signage level.

But for the interrogation scenes at the Issuing Department of Little Wittenham Detention Centre, the action actually takes place a few streets away in a building with a fitting past.

Clerkenwell’s former House of Detention on Sans Walk is another location shoot favourite. Its basement is all that remains from the original building following a Victorian bombing, it's rebuild as the New Prison and demolition to use the land for a school.

Today, the schoolhouse has been converted into flats and offices but the underground cellars and corridors have found a new purpose. They are another often-used filming location, most recently appearing in ITV’s own wartime drama, The Halcyon.

Staying in Clerkenwell for one more SS-GB filming location, the Two Brewers public house is played by the Jerusalem Tavern at 55 Britton Street. Archer isn’t the first fictional character to stop for a drink, or a cup of tea, at the pub.
The 18th Century coffee house turned watchmakers’ shop only became a pub twenty years ago but it has gained a reputation for traditional atmosphere despite its unusual history. It also holds a host of awards, putting it on the map for beer lovers, locals and tourists alike.

Just minutes away from the South Bank, Windmill Walk’s brick terraces feel a world away from the buzzing culture and tourism locale. In SS-GB, the street is used for a scene where Douglas Archer and Harry Woods talk.

Nazi guards are seen patrolling Chancery Lane, in the heart of London’s legal district. Interestingly, the street has its own wartime connections - during World War II several air raid shelters were concealed under the lane, for use by government officials.

Even the dead of SS-GB are to be found in auspicious filming locations. Highgate Cemetery is known for its high profile burials from all walks of life, from celebrated writers to radical political ideologists.

The production shot in the imposing West Cemetery for a Nazi funeral sequence, with the cast, crew and a hoard of extras taking over the graveyard.

Heading south of the centre, Hurst Way in South Croydon is used throughout the series to set the scene. If it looks familiar, it may be because this leafy suburban street was last seen in a very different drama, The Durrells.

The dockyard’s brick alleyways and industrial spaces have probably graced your screen before. The popular location can also be seen in series including Call the Midwife, Mr Selfridge and The Crown, and period films like Les Miserables and Sherlock Holmes: Game of Shadows.

In SS-GB, the Tarred Yarn Store is used as the mortuary. Street scenes were shot outside the brick buildings of the Ropery, Anchor Wharf, the South Stables and around the dockyard’s church.

The garden of The Commissioner’s House sets a totally different tone during its brief appearance in the series. Chatham can lay claim to the honour of housing the oldest surviving naval building in the country with this stately property, which is just a short walk away but feels miles apart from the industrial hub.