St. Trinian’s and St. Trinian’s 2: the Legend of Fritton’s Gold follow the unruly schoolgirls and eccentric headmistress Miss Fritton as they steal the painting Girl with the Pearl Earring, then unearth buried treasure. Their quests take them around filming locations in London and the Home Counties, causing mayhem as they go.

A grand residence in near Henley-on Thames, Oxfordshire, was used as the filming location of St. Trinian’s School in the first film, making use of the house and grounds which appear extensively.

Appropriately, this 18th Century stately country home was used as a boarding school for several decades before falling back into private hands. Park Place in Remenham was the most expensive house ever sold in the UK when it changed hands in 2011.

Miss Fritton’s love interest and nemesis, Geoffrey Thwaites, is suggested to be in meetings in London’s City Hall – the offices of the Mayor of London. In the background you can clearly see Tower Bridge, which features in the finale of St. Trinian’s 2. 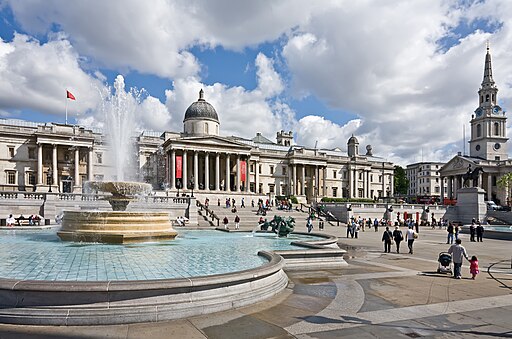 By Diliff (Own work) [CC BY-SA 3.0 (http://creativecommons.org/licenses/by-sa/3.0) or GFDL (http://www.gnu.org/copyleft/fdl.html)], via Wikimedia CommonsThe girls are seen at the National Gallery in London for the school challenge competition hosted by Stephen Fry – a cover for their planned art heist. While St. Trinian’s filmed at Trafalgar Square and the Natonal Gallery’s exterior and entrance hall, the competition scenes were shot the Reform Club and picture gallery scenes at Dulwich Picture Gallery.

It might be less well-known than the bigger location it plays onscreen, but this South London location was in fact the first purpose-built public art gallery in the world. Although visitors won’t find the Vermeer masterpiece from the film, they can enjoy fine artworks from the likes of Canaletto and Rembrandt. 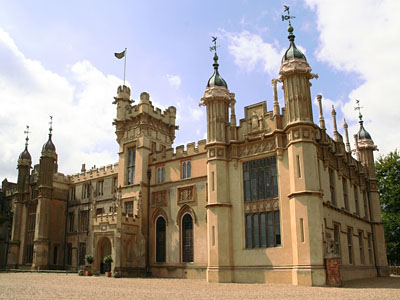 By Casanovafly91 (Photographed knebworth house) [GFDL (http://www.gnu.org/copyleft/fdl.html) or CC BY-SA 3.0 (http://creativecommons.org/licenses/by-sa/3.0)], via Wikimedia CommonsFor the second film, St. Trinian’s School moved to Knebworth House in Hertfordshire. Also used in The King’s Speech, Poirot and The Crown among others, this grand gothic property dates back to the Tudor period with the Victorian residents putting their stamp firmly on the architecture.
Knebworth is open to the public on most weekends and holidays from spring to autumn. After checking out the areas featured on film and finding out about the house’s history, visitors can find a total change of scene in the dinosaur trail and adventure playground.

As the girls search for the next clue on their quest for Fritton’s lost treasure, they infiltrate a boys’ school – filmed on location at Charterhouse School. In reality, the 400 year old institution accepts girls at sixth form so Chelsea and friends could have left the disguises at home.

The former Clerkenwell House of Detention in Sans Walk, Islington, has appeared in many films and TV productions including recent ITV drama The Halcyon and Sherlock Holmes.
You might not recognise it from the street, but beneath a block of converted flats you’ll find a network of cellars which are all that remain of the former Clerkenwell Prison. This labyrinth set the scene for Annabelle and Kelly’s mission to the secret society’s vaults.

Sourav Niyogi [GFDL (http://www.gnu.org/copyleft/fdl.html), CC BY-SA 4.0-3.0-2.5-2.0-1.0 (http://creativecommons.org/licenses/by-sa/4.0-3.0-2.5-2.0-1.0) or Public domain], via Wikimedia CommonsThe other girls divert attention away the Fritton’s Gold trail by holding a flashmob in Liverpool Street Station, with the St. Trinian’s team filming on location during opening hours. From the Tube station, Annabelle leads the way to the buried treasure at a London landmark just south of the river.

The Globe Theatre, built near the site of Shakespeare’s original theatre of the same name, appears as itself in the grand reveal. Location hunters can catch a traditionally produced Shakespeare play or an alternative one, or even something totally different that shares the spirit of the Bard’s work.
Location hunters who want to find out a bit more, look around and photograph the theatre space more freely can visit it along with the museum and visitor’s centre.

Continuing the historical theme, we first see the St. Trinian’s girls run past the Golden Hinde on their way to the Globe. But when Sir Piers Pomfrey makes off with the precious manuscript they borrow the ship, taking to the high seas of the River Thames to catch him.
Although it looks every bit the Elizabethan galleon, the Golden Hinde moored in Bankside is actually an accurate replica of the original. It was built in the 1970s and spent 20 years touring before settling into its current dock, just minutes away from the replica Globe.