The Dig Filming Locations: How the Sutton Hoo Dig was Recreated 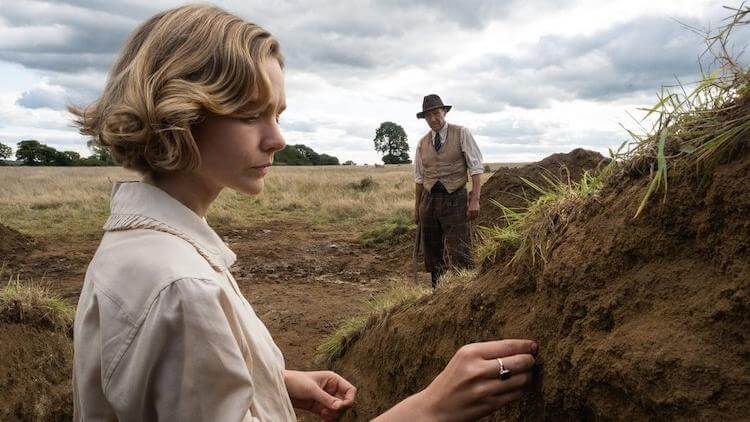 You can find The Dig filming locations in Hollesley, Boyton Marshes and Godalming with deleted scenes shot in Cromer. The Sutton Hoo movie was filmed close to the real Edith Pretty’s house in Suffolk, but the house and dig scenes were filmed in Surrey.

The Dig on Netflix is based on an amazing true story – with just a few changes. After the death of Edith Pretty’s (Carey Mulligan) husband, the Suffolk landowner invites an archaeology team to investigate burial mounds in one of the fields.

Archaeologist Basil Brown (Ralph Fiennes) is dispatched to dig the trenches, and Edith and her son Rupert (Archie Barnes) are soon spellbound by the discoveries.

The Dig is based on the true story of Sutton Hoo near Woodbridge in Suffolk that was excavated between 1938-39.

After her husband’s untimely death, Edith Pretty and her young son Robert took interest in the ancient burial mounds on their land at Sutton Hoo. She contacted Ipswich Museum and archaeologist Basil Brown, who ended up completely changing the way we think about the early Middle Ages.

They uncovered the Great Ship Burial – the elaborate grave and treasures of King Rædwald, an Anglo-Saxon ruler who lived in the 7th Century.

What is The Dig on Netflix Based on?

The Dig on Netflix is based on the 2007 novel The Dig by John Preston, a relation of archaeologist Peggy Piggott.

Like the 2021 film, Preston’s book dramatizes events surrounding the real Sutton Hoo discovery. Harlots and Byzantium screenwriter Moira Buffini adapted the story for producer Gabrielle Tana, and along with director Simon Stone they crafted human stories around the archaeological dig.

Much of the film is based on fact, though romantic attraction between the characters has been added in. For example, Edith’s cousin Rory (Johnny Flynn) is a fictional addition.

Where Was The Dig Filmed?

The Dig was filmed in Suffolk near the real Sutton Hoo, at Boyton Marshes RSPB Reserve and Shingle Street – but the Netflix movie’s dig site and Tranmer House scenes were filmed around Godalming in Surrey.

The change of location isn’t the only unexpected detail about The Dig locations. Here’s why the Sutton Hoo scenes were actually filmed back to front…

In Netflix movie The Dig the Sutton Hoo scenes were filmed at Godalming, between the Surrey Hills Area of Outstanding Natural Beauty and the South Downs National Park.

Though it looks entirely natural, the team had to create the whole scene from scratch. And it turned out, the most efficient way to film an archaeological dig is to start at the bottom of the trench.

“We had to physically create the mounds, a virgin landscape, with tons of soil and plantings, then show the process to the reveal of this 100-foot Saxon ship in the ground… start the shoot with the reveal of the ship, then pile earth over it and go back in the story to the moment when Basil sticks a shovel into the earth for the first time.”
Maria Djurkovic, Production Designer

The filming location for Edith Pretty’s house in The Dig is Norney Grange in Surrey. It’s a picturesque house in Shackleford on the fringes of Godalming.

Tranmer House was originally known as Sutton Hoo House when it was built in 1910. With their pale walls and bay windows, the filming location for Tranmer House is a close match to the real thing.

Norney Grange was designed ten years earlier by Charles Francis Annesley Voysey, an architect who is closely associated with the Arts and Crafts movement.

You can find his work from the West Country to the Lake District – and in Shackleford, Surrey. The late 19th Century design style gives Edith’s cottage its cosy appearance.

You can visit the real Tranmer House subject to opening restrictions – it’s part of the National Trust Sutton Hoo site. Inside, you can find out more about the real Sutton Hoo dig, the Pretty family and Basil Brown’s archaeological work.

The Dig’s Suffolk countryside scenes were shot in the real Suffolk, close to Sutton Hoo. Though it’s not far from Ipswich, Sutton Hoo stands on the edge of the Suffolk Coast and Heaths Area of Outstanding Natural Beauty.

Many open air The Dig filming locations are easy to visit (travel restrictions permitting in the current situation).

Boyton Marsh in the Alde-Ore Estuary is one of the stunning areas seen in the Netflix movie. It’s not only a stunning unspoilt part of the country, it’s an RSPB Reserve that’s teeming with wildlife. Look out for wetland, grassland and coastal species from barn owls to dragonflies.

Scenes were also shot on the footpath at the Snape Marshes Nature Reserve, a Suffolk Wildlife Trust site on the River Alde. https://www.suffolkwildlifetrust.org/snapemarshes

The underwater shots of the Sutton Hoo team rushing to save a trainee pilot were filmed locally and at Pinewood.

While shots of the lake are from the Suffolk location shoot, the underwater footage was filmed at Pinewood. Pinewood's Underwater Stage has hosted everything from big action sequences to The Dig's unexpected dramatic moment.

Another of The Dig filming locations in Suffolk is Thorpeness Beach – and it’s another location that’s easy to visit.

In a county with so many beautiful beaches to choose from, Thorpeness stands out as a local favourite. https://www.suffolkmag.co.uk/home/best-beaches-in-suffolk-1-6161495 The beach itself is sandy and dog-friendly, while the seaside village is home to a unique Peter Pan-themed boating lake.

Shingle Street is a row of cottages in the Alde-Ore Estuary, facing the coastline on one side and hemmed in by marshes on the other. There’s no camera trickery in the cycling scene, this is a remote row of cottages surrounded by open space.

The next-closest neighbours are two miles away in Hollesley. And Shingle Street itself sat empty for several years in the 20th Century. During WWII, the little community was evacuated for safety. After the MOD used the beach for munitions testing, the area had to remain vacant for most of the decade.

The Dig Ipswich Museum location is Ealing Town Hall, setting it closer to the British Museum that Suffolk. It’s recently been used as for Gangs of London and The Gentlemen so the Sutton Hoo movie makes a change of pace.

In fact, The Dig was the last movie to be filmed at Ealing Town Hall in its original form (it’s due to be converted into a hotel).

Situated on Uxbridge Road, the Victorian town hall originally housed a library, events hall, fire station and swimming baths. So we’re only seeing a fraction of its potential onscreen!

Look out for its beautiful gothic exterior, and the entrance with its staircase. They’re both shown off in the film, once at the beginning and again later on.

The real Ipswich Museum dates back to a similar era but is actually a red brick building.

Inside, it combines the classic exhibits of the Victorian Natural History Gallery with modern displays on Egyptology and world cultures.

Along with a focus on Ipswich’s own history, and the kind of discoveries that encouraged archaeologists like Basil Brown.

Ipswich Museum also holds records on the Sutton Hoo dig’s participants, which show up a few differences between The Dig’s museum scenes and reality.

Basil and May Brown were family friends of curator Guy Maynard, even though the Netlfix film shows some tensions between them.

The Post Office filming location used in The Dig is really Shackleford Post Office - The Dig house is in Shackleford in Surrey, and the local high street was also used for the film.

While the two filming locations are a few minutes apart, the settings are not. The Diss high street scenes are set on the Norfolk-Suffolk border, while Sutton Hoo.

Look out for the distinctive red tile hung cottages with the old-fashioned Post Office sign around half way through the Netflix film. And of course, while the real signage is modern, you can visit this location and even post a letter at the Post Office from The Dig.

Chinnor Railway Station. Alan Burke, CC BY-SA 2.0
The Woodbridge train station filming location in The Dig is Chinnor. Edith is seen catching the train to London on an open air platform, with vintage Woodbridge signage around the station building.

The Dig’s railway scenes were shot back in 2019 at the station on the Chinnor and Princes Risborough heritage railway. The line ran through the Chilterns for nearly a century, halting service in the 1950s after passenger numbers fell.

In the mid-90s, it reopened as a heritage railway and began a second career as a filming location. And of course, Buckinghamshire is Midsomer Murders country - you might recognise Chinnor as Holm Lane Junction in the series.

Under normal circumstances, you can visit this filming location easily by booking one of the rail events on the calendar. Check ahead and see what’s coming up.

The statue in The Dig looks like the Gladstone statue on The Strand in London.

It depicts four female figures surrounding the figure at the centre, which are shown being covered with sandbags in the Netflix Sutton Hoo movie. It’s one of the earlier signs of wartime life that we see in the film.

And the man on the Portland stone plinth is William Ewart Gladstone, the Liverpool-born Midlothian MP and popular late Victorian Prime Minister.

The politician was so popular that his run as PM lasted 12 years. He eventually retired from office in his 80s, after becoming the only leader to hold the post for four terms.

W E Gladstone’s statue isn’t far from the disused Aldwych Station, a popular filming location for tube scenes in countless movies. And in fact, the bronze figures sits at the top of Middle Temple, where some of the other London shots were filmed.

The garden party scene was filmed at Norney Grange with a real brass band.

In the scene, the archaeologists, Ipswich Museum and British Museum representatives celebrate the Sutton Hoo discovery with Mrs Petty.

The brass band is Alder Valley Brass, who are based locally in Surrey.

Cromer Pier. rodtuk from UK, CC BY-SA 2.0
Cromer’s pier, beach and one of the promenade’s hotels were used in The Dig’s deleted honeymoon scenes. Instead, we meet the archaeology graduates mid-way through the film – but originally, we got to know them in the Norfolk seaside town.

“The Cromer scenes are some of the most beautiful in the film and I'm incredible proud of them… It's an astonishing thing that sometimes you have to get rid of some of the best scenes, because you have to slim down the narrative and keep the momentum going forward.”
Simon Stone, Director

Stone has voiced hopes that the Cromer scenes will be released in some form, so let’s hope they’ll resurface as bonus features in future.

Extras in period costume were brought in for the chilly November 2019 shoot, while Lily James shot scenes on the windswept pier.

Peggy and Stuart’s hotel was the Hotel de Paris in Cromer. Filming took place inside and outside the hotel, with Jetty Street and Jetty Cliff closed for the shoot too.

The 2015 BBC dramatization of Agatha Christie’s Partners in Crime was filmed around the same area, even using the Hotel de Paris. And on a different note, Alan Partridge: Alpha Papa’s memorable finale was filmed on the pier.