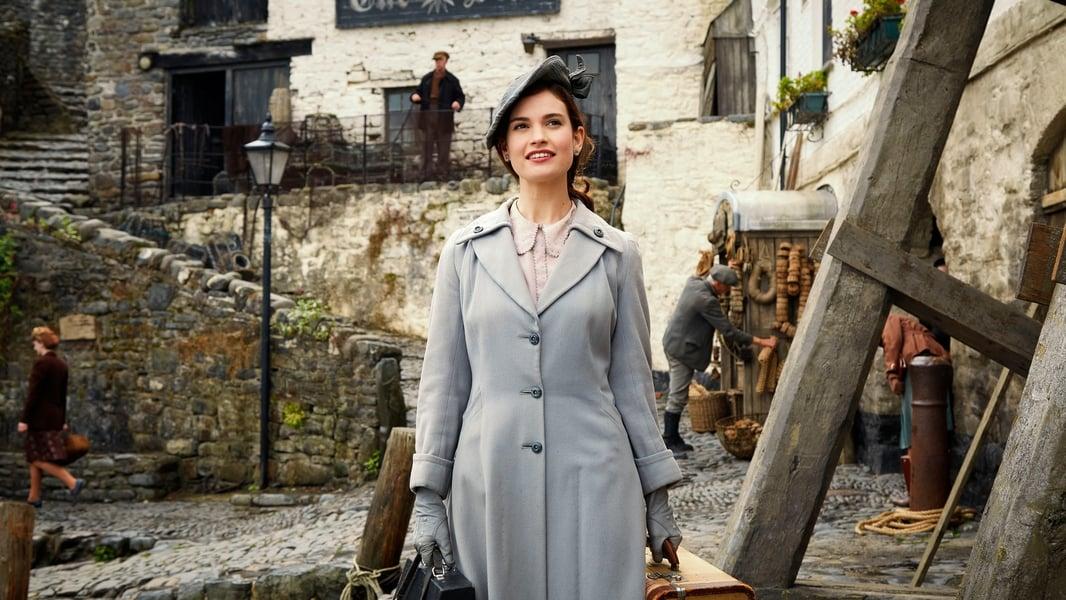 The Guernsey Literary Potato Peel Pie Society filming locations include Hartland Abbey, Bristol Docks and London’s Sicilian Avenue. Here’s why the movie wasn’t filmed in Guernsey and which locations were used instead.

The production company behind the film, Graham Broadbent and Peter Czernin’s Blueprint Pictures, also made Becoming Jane, The Riot Club and The Best Exotic Marigold Hotel. And of course, Mike Newell has directed a long list of British classics from Four Weddings and a Funeral to Harry Potter and the Goblet of Fire and Great Expectations.

Where Was The Guernsey Literary Potato Peel Pie Society Filmed?

“There’s a scene on a bus at the beginning of “Guernsey” where they made part of Shoreditch look like the 1940s. I remember sitting on a bus watching ’40s London go by. Filming in the old Foyles bookshop was like going back in time too.”
Lily James

Look out for Sicilian Avenue in London, a Downton Abbey street scene location and Bristol Docks in the adaptation too.

Why Was The Guernsey Literary Potato Peel Pie Society Not Filmed on Guernsey?

The Guernsey Literary Potato Peel Pie Society wasn’t filmed on Guernsey because the modernisation was too hard to disguise.

“It was too tricky to recreate the look and feel of 1940s Guernsey given how much the island has changed since that time.”
Studiocanal

Other locations were geographically further away but closer to the historical look and feel needed for the story.

Visitors can still explore the settings behind the movie and Mary Ann Shaffer and Annie Barrows’ bestselling novel in the Channel Islands. Guernsey’s scenery and wartime museums let tourists get to grips with the era, but when it comes to the everyday life the island has moved on. 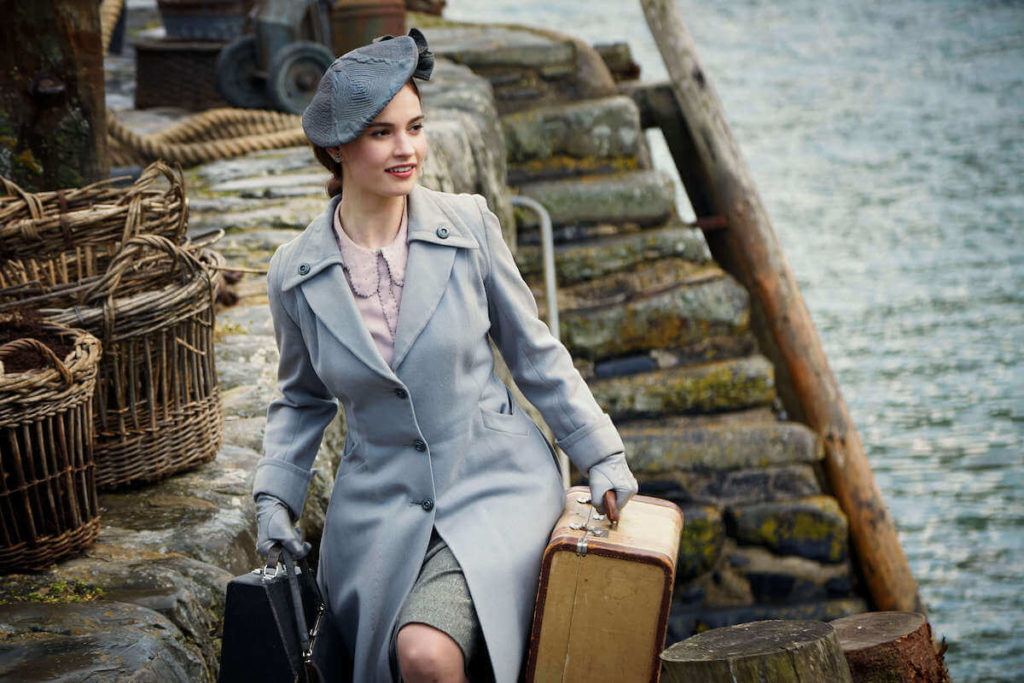 Look out for the North Devon village’s steep cobbled lanes which slope around the cliffside to the 14th Century quay. Clovelly’s low stone walls and historic cottages are also seen onscreen.

This tiny fishing village was once owned by Queen Elizabeth I – but since Tudor times, it’s remained in private hands, making it easier to preserve the heritage of this little corner of Devon.

If you plan to visit, be aware that there’s an entry fee, which contributes to the village’s upkeep, and parking is located just on the edge of the village, which is car-free.

Shots of the Nazis marching down a Guernsey high street were filmed in Bideford. The North Devon town’s own High Street North Devon had the traditional coastal feel the filmmakers were looking for.

Look out for its sloping when Nazi forces march through at the start of the Occupation. Elizabeth and her mother look on, before things take an unfortunate turn. You’ll see the closely set terraced houses and Georgian shopfronts clearly in the pivotal scene.

In real life, visitors can explore the street and nearby lanes to discover independent shops and charming cafes. 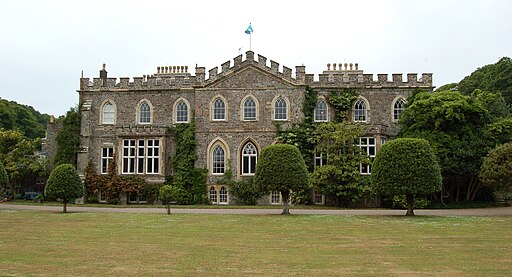 The estate’s woodland paths feature in several post-War scenes as well as in flashbacks.

The coastline between Hartland Quay and St. Catherine’s Tor is used as a stretch of Guernsey coastline, and areas around Hartland Abbey and Blackpool Mill appear too.

You can find the location where they society members are stopped by a Nazi patrol in the grounds (and where they spontaneously form the society). The distinctive path surrounded by an archway of foliage appears exactly as it does onscreen. It was actually shot under a road bridge during a night shoot.

Hartland Abbey has proven a popular filming location for TV and film alike. The BBC’s The Night Manager and 2007 adaptation of Sense and Sensibility also made use of the estate. 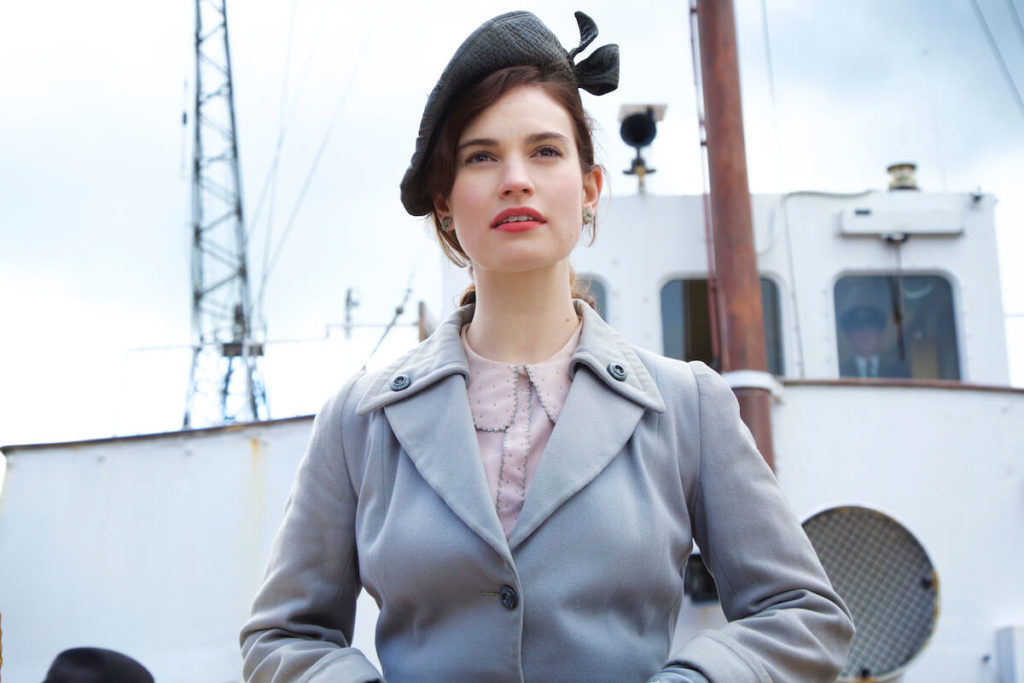 As with the Guernsey locations, the cast and crew needed to film somewhere well-preserved. That led the team to Bristol Harbourside’s M Shed.

“Bristol has a fantastic dockside museum, which has been beautifully preserved… It has enabled us to transform the exterior to represent Weymouth Docks in 1946.”
Paula Mazur, Producer

“Bristol made a brave and, at the time, controversial decision in the 1990s to conserve Princes Wharf as a working quayside… With the museum’s operational cranes, steam railway and transit shed, it now makes an ideal and animated backdrop… and one that is unique in the UK.”
Andy King, M Shed Curator of Industrial and Maritime History

And the paddle steamer that’s docked there is exactly that, a 1940s paddle steamer – with some added set dressing. MV Balmoral and its sister ship, PS Waverley, are well-known figures along the Bristol Channel. It’s the Balmoral that was used in this movie. Unfortunately it’s in need of repairs to get back on the water so passengers should check for the latest news before planning a voyage.

M Shed and the Balmoral also appear in Stan and Ollie, with Steve Coogan and John C. Reilly waving to the crowds as the classic comedians.

Its sister ship, the Waverley, has made film and TV appearances of its own, and sails a roster of UK routes every year. You might just catch it at a dock near you, but you’ve also got to plan well in advance to catch this historic paddle steamer.

But in the meantime, you can take a trip back in time with vintage footage from its heyday.

The Plane Landing on the Beach 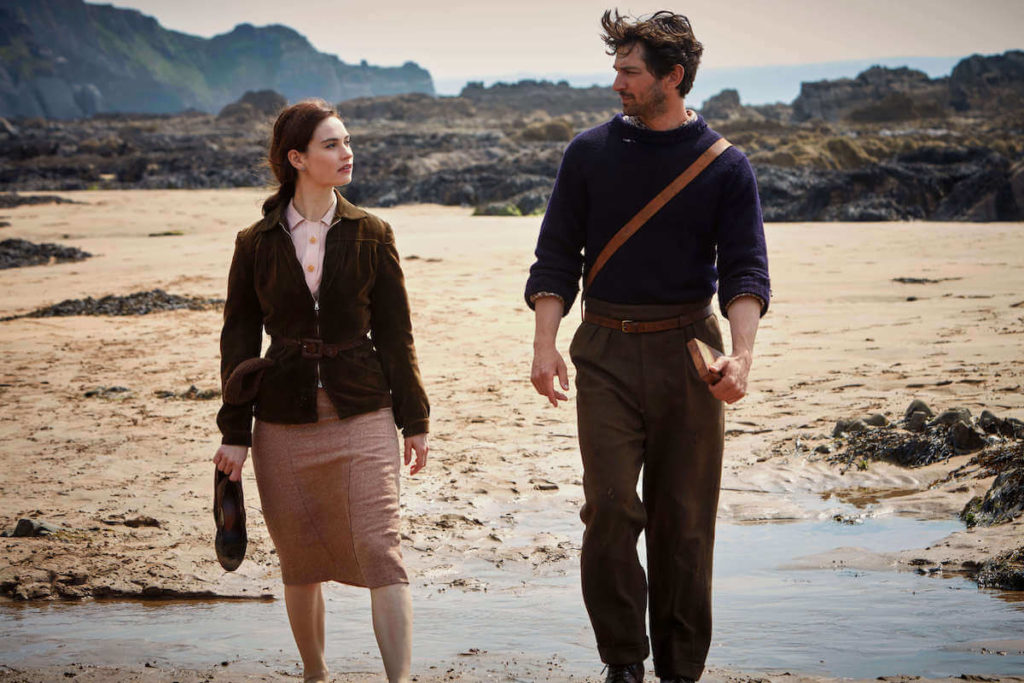 Saunton Sands, Copyright STUDIOCANAL S.A.S.
The beach in the scene is Saunton Sands in North Devon. In the scene, an aircraft lands on the shore – the beach’s own tractor was enlisted to tow the Douglas C-47 Dakota aircraft into position for the movie.

Of course, it’s another scene that wasn’t filmed on Guernsey but there’s a real piece of history in the shot. The same plane was flown to Guernsey for Liberation Day in 2018. 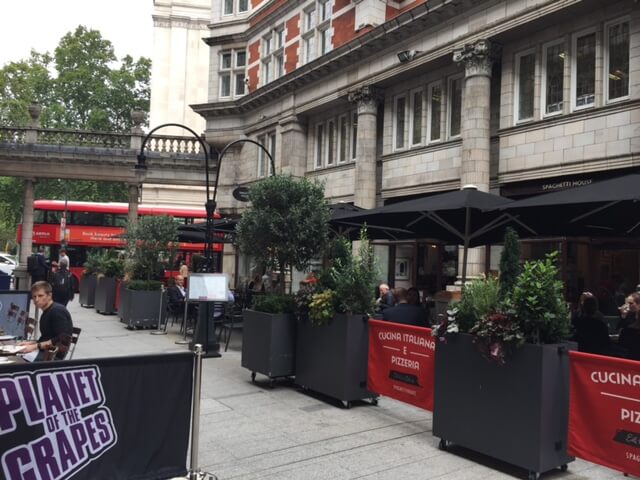 Sicilian Avenue, London. Copyright FindThatLocation
Juliet’s Foyles bookshop scenes were filmed in London’s Sicilian Avenue as well as at the original shop. It’s an unusual pedestrians-only cut-through just yards from Holborn. Visitors can pass through towards Bloomsbury Way on the way to the British Museum, or walk along Southampton Row towards to reach the Strand or Chancery Lane.

This unusual Edwardian avenue announces itself with columned arches. Its shop facades are separated by more of the same architecture, so it’s very distinctive.
But the scenes set inside the bookshop are the real, much-loved Foyles on Charing Cross Road. 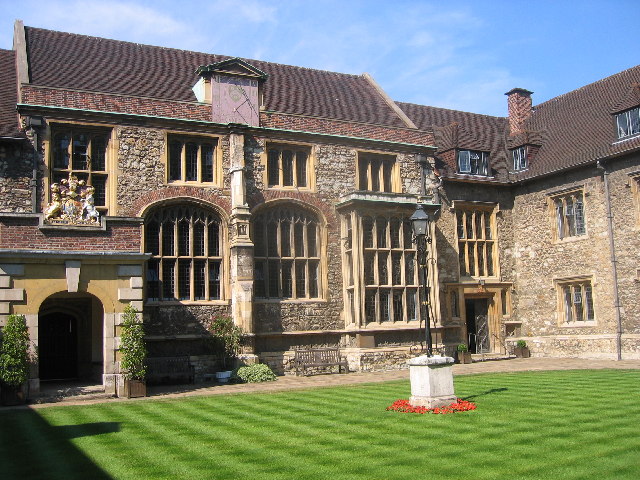 Charterhouse London. Stuart Taylor / Charterhouse, EC1
Lily James is seen walking around Charterhouse in London street scenes. That’s not all, though. The independent school is also seen near the start of the film.

Juliet and Sidney then walk past a wall with an unusual chequerboard design – again, part of Charterhouse, with the characters walking along Charterhouse Square.

The same areas were used in Downton Abbey’s political rally scenes. Sybil and Branson feature most heavily in those scenes, though of course Jessica Brown Findlay is only seen in The Guernsey Literary and Potato Peel Pie Society’s Guernsey scenes. Meanwhile Lily James and Matthew Goode only came into Downton in later seasons.

Juliet later passes through an archway with her fiancé. This night shoot also took place at the school.

Downton Abbey scenes were filmed in nearby Rutland Place. It first appeared when Bates seeks help for his leg, and is later used as Moorfield Eye Hospital when Mrs Patmore visits.

The House of Detention in Sans Walk is used in an unlikely scene. Clerkenwell’s former prison is often seen used for its eerie labyrinth of cellars, but for The Guernsey Literary and Potato Peel Pie Society it was the filming location for the jazz bar party.