ITV's hotel drama The Halcyon has been heralded as the new Downton Abbey, and takes over Mr Selfridge's slot in the schedule on UK screens.

Like its predecessors, it follows the upper and lower echelons of society who inhabit a beautiful place that hides all kinds of goings-on beneath a flawless exterior. Moving forward from the 1910s and 20s of Mr Selfridge and Downton Abbey, this new show from Left Bank Pictures plunges us into the world of 1940s London.

All of the era's glamour and deadly danger is right there from the opening scene, highlighted by the setting - a sumptuous hotel surrounded by the sandbags and sirens of wartime. It's made all the more convincing because the production takes to the streets so often.

The Halcyon filming locations are found satisfyingly close to their spiritual home and many are also easy to visit, taking in several East/Central London streets and a filmmakers' favourite just an hour away from the city.

The programme's 'hotel' is 32 Lincoln's Inn Fields, which is used as the Halcyon's grand exterior. In its everyday life the Grade II listed building, which dates back to 1903, is in full use by the London School of Economics (LSE) who currently own the property. 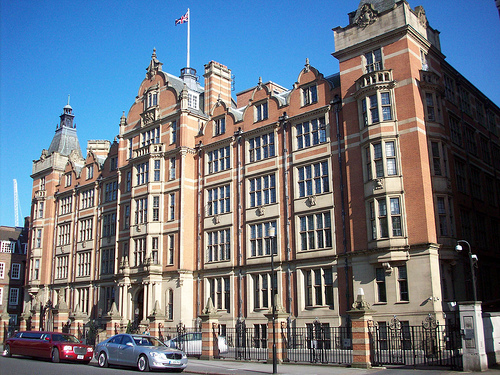 32 Lincoln's Inn Fields
By Boilingfruit (Own work) [CC BY-SA 3.0 (http://creativecommons.org/licenses/by-sa/3.0)], via Wikimedia Commons
The production doesn't just use the Edwardian façade to set the scene – wartime action came back to these London streets when they let period fire engines and plumes of smoke loose on the square during filming.

Fortunately, the Friends of Lincoln's Inn Fields found the location shoots fascinating rather than intrusive, as they watched their neighbourhood being taken back to the Blitz for the summer.

And when the air raids siren sounds, the hotel's residents and staff take shelter in the basement, which is actually found a stone's throw from the Halcyon hotel exterior.

Clerkenwell House of Detention on nearby Sans Walk houses the Halcyon’s basement filming location in its labyrinth of cellars and catacombs. Unlike the chic hotel, this building's history is somewhat darker. As the name suggests, it was built in the early 17th Century to detain prisoners and carrier on until the bulk of it was burnt down in a riot, after which a school was build above the basement.

The cavernous spaces left behind have appeared in St Trinian’s 2: Legend of Fritton’s Gold in the scene where the head girls infiltrate the secret society, and Sherlock Holmes as the catacombs below the Houses of Parliament in Westminster.

With such a turbulent past attached to this filming location, the former prison is a popular ghost tour hotspot and has also appeared on Most Haunted with Yvette Fielding and Derek Acorah. Join a tour group if you dare!

The tube entrance seen onscreen was put up for the production and isn’t to be found at the site outside filming periods. Nearby Serle Street and Portugal Street also appear onscreen, decked out with wartime details, while Spa Fields is used for some outdoor scenes.

Like ITV’s earlier historical drama Mr Selfridge, this tale from London's past travelled out of the city to the Historic Dockyard Chatham, Kent. The Ropery and Anchor Wharf lend the show cobbled streets, brick buildings that could look at home in the centre or east of London, and uninterrupted space to film without cordoning off a busy thoroughfare.

Once again, this wartime drama brought the full drama of the Blitz to its set. You’ll also catch glimpses of the dockyard filled with ash and smoke as air raids take their toll.