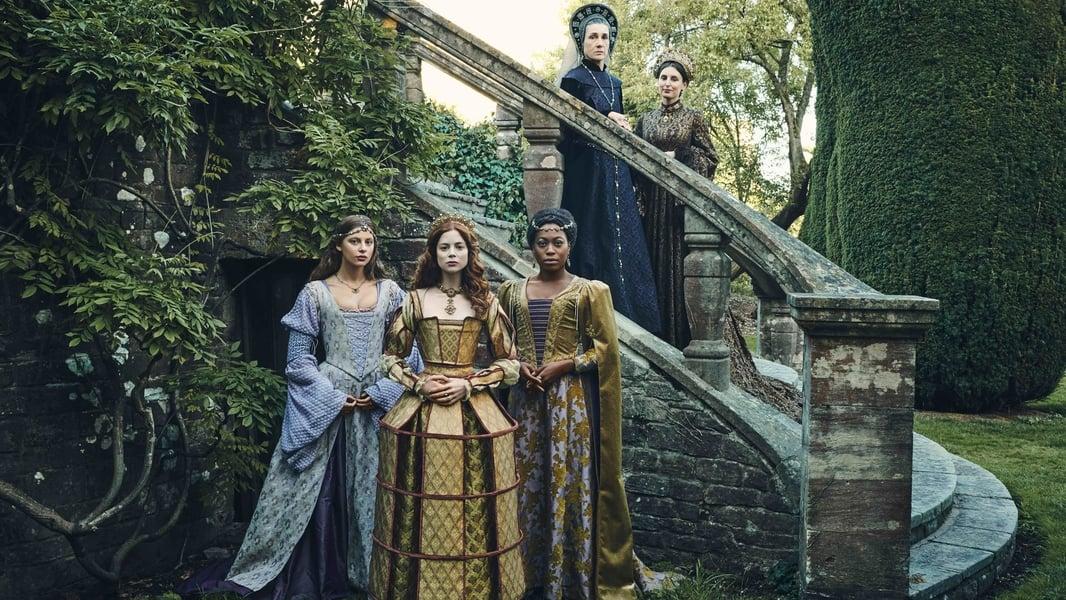 The Spanish Princess filming locations overlap closely with Catherine of Aragon and Henry VIII’s real haunts, sending us straight into the Tudor court. Emma Frost and Matthew Graham’s adaption of Philippa Gregory’s The Constant Princess and The King’s Curse is brimming with palaces, cathedrals and estates.

Where Was The Spanish Princess Filmed?

In case you need a refresher on the rivals to the throne, Downton Abbey’s Laura Carmichael plays the niece of Richard III and Edward IV.

"I'm playing this Plantagenet character who's been married into the Tudor family and she's got the feeling of having seen all of her family lost, killed,"
Actress - Laura Carmichael, Margaret Pole

Which explains why she’s in such a conflicted position when she’s charged with guiding Charlotte Hope’s Catherine of Aragon.

The Spanish Princess also shares filming locations in common with The White Princess, which is great for continuity given that they form part of the same history.

Look out for Gloucester Cathedral, Wells Cathedral’s Chain Gate Arch and Cathedral Green, and Salisbury Cathedral’s cloisters in both shows. The first miniseries, The White Queen, breaks the pattern though – it was actually filmed in Belgium.

Wells Cathedral. Lamiai [CC BY-SA 3.0 (https://creativecommons.org/licenses/by-sa/3.0)]
Look out for Wells Cathedral in The Spanish Princess wedding and funeral scenes. The Starz series filmed around Wells Cathedral over the summer of 2018, and returned in early September 2018 to shoot around Cathedral Green and St Andrew’s Street.

Wells Cathedral is the oldest Gothic cathedral in the UK. It was built between the 12th and 15th Centuries, though the Romans and Saxons had their own chapels on the same site.

The 15-year-old Catherine and Arthur really married in St Paul’s Cathedral, which had been newly redesigned for the occasion. Afterwards, they went to live at Ludlow Castle in Shropshire for the Prince of Wales to take up leadership of the Council of Wales and the Marches.

See Ludlow Castle from a different perspective by staying inside its walls. You can get a sense of the castle where Catherine of Aragon, Prince Arthur and Margaret Pole lived, but with mod cons like bathing facilities that Catherine would probably have appreciated.

“… we shot at the Berkeley Castle for Westminster Palace courtyard and were able to use a couple of the interiors and corridors as well. If you watch a lot of period dramas, you’ll know how rare it is to achieve that relationship between interior and exterior.”
Emma Frost, Showrunner

Berkeley Castle is something of an essential in Tudor-set dramas. It was also a White Princess Westminster Palace filming location, so the continuity between the shows is nearly seamless.

2003’s The Other Boleyn Girl and Henry VIII shot scenes at Berkeley and more recently, Six Wives with Lucy Worsley, The Hollow Crown and Wolf Hall were all filmed at the castle.

Poldark brought it into the Georgian era as Bodmin Assembly Rooms. And Brad Pitt’s upcoming Netflix production The King, starring Robert Pattinson and Lily-Rose Depp in the Henry V story, was shot at the castle in 2018.

Berkeley Castle doesn’t just look the part. The real Henry VIII stayed there with Anne Boleyn on royal progress, and the family’s connection to his court is well-documented. The Spanish Princess cast didn’t have to look far to find inspiration at this Westminster Palace filming location.

“There’s a big portrait of him I could go and look at in between scenes,” the actor recalls. “We were surrounded by the history.”
Ruairi O’Connor, Prince Harry/Henry VIII

What couldn’t be found on location was replicated at Bottle Yard Studios, who already have a track record with Philippa Gregory adaptations. They’re close enough to real historical buildings – but they’ve also got space to custom-build the ones that can’t be found.

“The studios are ideally located for access to a huge range of historic locations and they provide a really convenient and well-managed base for our interior Palace of Westminster sets.”
Charlie Hampton, Executive Producer of New Pictures

In fact, the team built a full scale replica of its spaces, complete with interconnecting rooms, over 30,000 sq ft of studio space. The combination of that extensive Palace of Westminster set and the free-flowing spaces at Berkeley Castle make The Spanish Princess even more unusual.

Gloucester Cathedral Cloisters. Christopher JT Cherrington [CC BY-SA 4.0 (https://creativecommons.org/licenses/by-sa/4.0)]
A surprising amount of the action goes on in corridors and gardens – the places where royalty and their courtiers can grab a private minute or two. So it makes sense that The Spanish Princess palace filming locations are that bit more detailed, taking place in ornately carved cloisters.

Harry Potter fans will instantly recognise some of the corridors from The Spanish Princess. They’re actually Gloucester Cathedral’s cloisters – and of course, part of Hogwarts School of Witchcraft and Wizardry.

For example, shots of Margaret Beaufort berating Catherine about the lack of an heir were filmed in Gloucester Cathedral’s cloisters.
They walk along the north side of the quadrangle, passing the Lavatorium where Ron and Harry hide from the troll in Harry Potter and the Philosopher’s Stone. If you look closely, you might recognise the distinctive fan-vaulted ceiling in longer shots.

Other palace scenes were filmed a few miles away in Salisbury. Look out for Salisbury Cathedral’s cloisters in scenes of Henry VII arguing with Henry VIII, and some night shoots.

In real life, Salisbury Cathedral holds its own part of history – one of four copies of the Magna Carta is displayed there. Sir Christopher Wren was heavily involved in its renovation in the late 17th Century. Much of this historic location actually dates from the restoration of the monarchy, over a century after Henry VIII's death.

The Tower of London 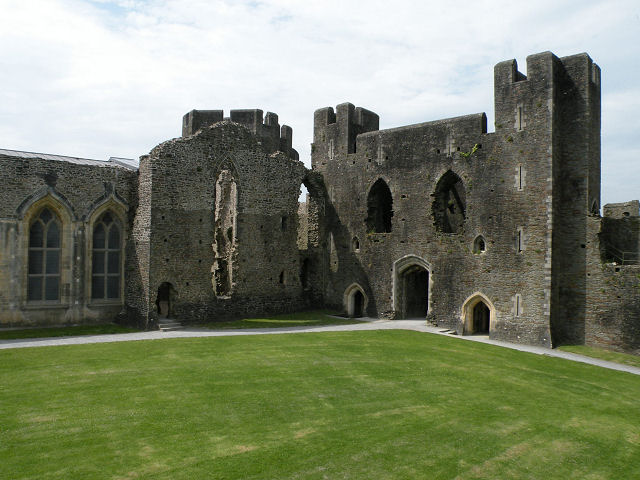 “We added the Tower of London bits to it, it is actually Caerphilly Castle. It did rain on the day, it always rained in Caerphilly.”
Matthew Graham, Executive Producer

The castle was a regular on historical fantasy Merlin, where its halls and corridors complimented the fairy tale turrets of Chateau de Pierrefonds – and helped the BBC’s budget go further with a home-grown location.

Doctor Who fans might recognise it too. Caerphilly was used in ten separate episodes, including The Rebel Flesh and The Vampires of Venice, but it’s at its medieval finest in Robot of Sherwood. Look out for the castle in the archery contest scene.

In fact, Caerphilly Castle is an ideal Tower of London filming location for The Spanish Princess. The South Wales stronghold was built by Gilbert de Clare, 7th Earl of Gloucester in the 13th Century, around the same time at the Tower of London was rebuilt.

Gilbert de Clare was the son-in-law of Plantagenet ruler Edward I of England and Eleanor of Castile. The castle really is fitting for the miniseries that follows their descendants.

They’ve got similar layouts, with a moat running around the outer walls and a drawbridge to enter. Look out for shots of The Spanish Princess characters riding over the drawbridge and through the gate.

Once you’re inside, there’s another system of walls and towers like the Tower of London’s. So apart from giveaway differences like the famous White Tower, there’s not much need for special effects.

Of course, if you’re into the history behind the series, you can visit the real Tower of London to uncover its secrets.

Alhambra . Jebulon [CC0]
The Spanish Princess Alhambra filming location couldn’t be more perfect – the cast and crew flew out to Granada to film at the real palace.

“That was one of my favourite things ever, just seeing the sunrise over the gardens and in the costumes.”
Stephanie Levi-John, Catherine’s Lady-in-Waiting, Lina

El Alhambra de Granada dates back to at least the 9th Century, and takes its name from the Arabic for ‘red walls’. When the first king of the Nasrid Dynasty made the fortress his base, it became Granada’s grand castle.

Catherine of Aragon’s nephew, Charles V, demolished part of the Alhambra to build a palace to his own tastes. So it doesn't stand exactly as it would have in Catherine’s childhood memories, but we aren't about to complain - the Alhambra is impressive any way you look at it.