Days Out On Location: Historic Docks and Harbours

Explore Les Miserables’ historic docks and harbours straight out of Poldark, set sail on a privateers’ ship or catch a ferry across the Mersey with Birmingham’s onscreen gangsters. These days out on location take in some of our favourite maritime filming spots around the UK.

Stanley Dock. By The original uploader was Scouserdave at English Wikipedia. [CC BY 2.5 (https://creativecommons.org/licenses/by/2.5), GFDL (http://www.gnu.org/copyleft/fdl.html) or CC-BY-SA-3.0 (http://creativecommons.org/licenses/by-sa/3.0/)], via Wikimedia Commons
Liverpool has been tipped to become “the main place to film in Britain” by industry insiders with the city centre hosting The Witness for the Prosecution, Fantastic Beasts and Where to Find Them, Bulletproof and more.

Liverpool’s grand docks have proven popular with film crews too. Peaky Blinders used Stanley Dock as a Birmingham lane in Season 1, but like the rest of the city these popular filming locations are usually transformed into London or New York.

Captain America: The First Avenger filmed its Brooklyn docks scene at Stanley Dock, seen at the end of the sequence where Steve Rogers pursues Heinz Kruger.

Guy Ritchie’s Sherlock Holmes filmed in the same area. Holmes and Watson make their escape through the dark alleys of Victorian London just before an explosion, catching their breath between a brick wall and a row of pillars.

It’s now part of the Titanic Hotel, which the duo pass from another angle en route to Pentonville Prison. Look for the CGI Tower Bridge under construction on the right hand side of the screen – Stanley Dock’s Titanic Hotel is on the left.

The Museum of Liverpool and Tate Liverpool are in the same area. You can even catch the Ferry Cross the Mersey mentioned in the Gerry and the Pacemakers song and film.

The route stops off at Seacombe Ferry Terminal, where we meet the Shelby family again - it was the Peaky Blinders ferry terminal filming location in Season 3 of the BBC drama.

The city is built across the River Avon with docks, wharves and the marina lining each bank while residential areas and the city centre are perched up on the hillside.

Bristol’s Dockside Museum at Princes Wharf was used as Weymouth Docks in The Guernsey Literary and Potato Peel Pie Society.

“…a very specific look was needed to recreate 1940s Guernsey both during and just after the occupation. Bristol has a fantastic dockside museum, which has been beautifully preserved,”
Paula Mazur, Producer

You can check out the area’s merchant past and connection to Aardman animation studios inside, or watch as steam engines pass by on the rails outside.

The production also drafted in a fully-functioning paddle steamer, one of the historic vessels that’s regularly seen around Bristol’s docks. The Waverley is the last sea-going passenger paddle steamer in the world, so if you decide to book a voyage you’ll be stepping into the past as well as onto a filming location.

At Charlestown in Cornwall you can explore the harbour wall, as seen in Poldark. Or skim pebbles on the beach, check out some local artwork or eat a cream tea as the tide comes in.

You can even explore a tall ship at the Historic Port of Charlestown like Alice in Wonderland and Amy Pond. The eponymous Tim Burton movie and the Doctor Who episode The Curse of the Black Spot were both filmed at the Inner Harbour.

The Shipwreck Centre is just above it. Find out more about everything from the link between mining and the docks, deep sea diving, buried treasure and piracy – all the ingredients of the best seafaring dramas! 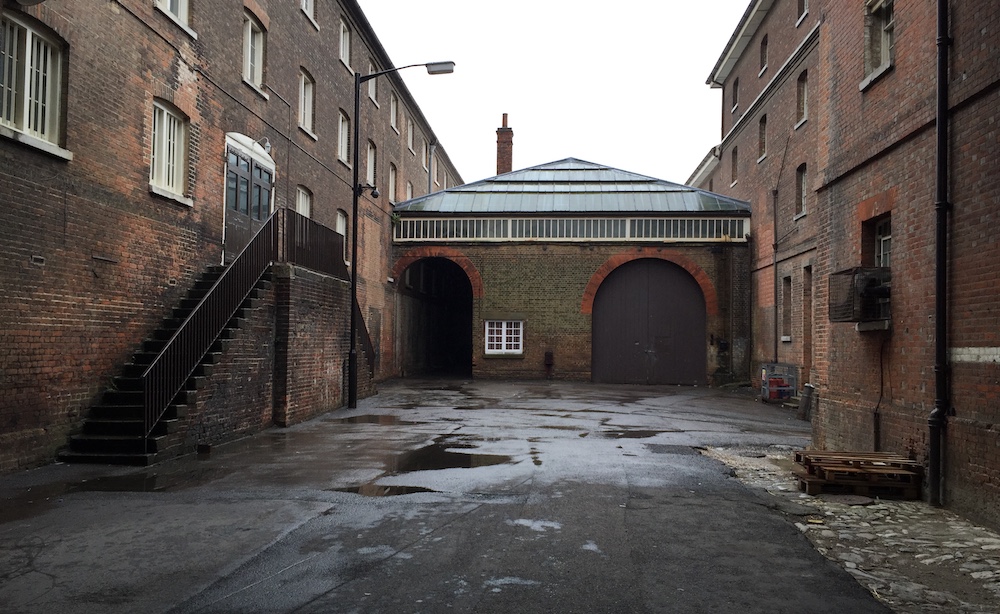 It’s a huge complex with an interesting identity – its maritime history, its screen appearances as several fictional docks, and its knack for morphing from a shipbuilding centre to city streets.

ITV’s Mr Selfridge and The Halcyon used the location to as a stand-in for early 20th Century London. Both productions filmed exterior shots around the historic buildings and custom-built sets. The long-running BBC series Call the Midwife is so closely associated with Chatham that there’s even a Call the Midwife tour.

Anchor Wharf appears when The Crown shows us the Royal Yacht Britannia for the first time.

Downton Abbey briefly filmed in and around the Ropery and other areas, this time as a Yorkshire town. Look for Mrs Hughes visiting Carson’s old acquaintance and for Rose and Anna at the Dance Hall.

In The Golden Compass, the area by the Mast Houses and Mould Loft become Trollesund. The scene where Lyra meets Lee Scoresby was filmed in No. 3 Covered Slip (its distinctive roof can be seen above the aeronaut).

Don’t miss the museum spaces inside as well as the filming locations outside. The HMS Victory was built here (subject to opening, you can walk the spaces where it was constructed) and manufactories like the Ropery have been preserved so you can go behind the scenes at this Victorian dockyard.

Dysart Harbour and the Harbourmaster’s House were taken back to the 18th Century for their appearance in the Stars show. They’re used as Outlander’s Le Havre location, where Claire, Jamie and Murtagh meet up with Jared Fraser.

Stop off at the Harbourmaster’s House to find out more about the Fife Coastal Path and life on the edge of the North Sea. You’ll find a café inside too.

It’s not far from the Fife Heritage Railway, St Andrews and another fan favourite – the picturesque Fife town of Culross is Outlander’s Cranesmuir filming location. You might recognise it as the town near Castle Leoch, where Claire visits Geillis Duncan.

The quiet Ayrshire town of Dunure appeared in Season 3 of Outlander, complete with a row of wooden shacks added by the crew in January 2017.

The harbour was seen when Claire and Jaimie boarded the Artemis, and the beach and ruins of Dunure Castle nearby were used in shots set off Silkies Island.

It’s set to return for Season 4 after filming in Spring 2018 as the seafaring plot continues.

You can visit the shingle beach which sits beneath the castle, or travel a bit further after setting foot on Outlander soil.

The stunning Culzean Castle is just a short drive south along the coast. The clifftop castle is now run by the National Trust for Scotland but it was originally designed by Robert Adam as a stylish upgrade for the Kennedy family, Earls of Cassilis. It replaced their previous residence – Dunure Castle. 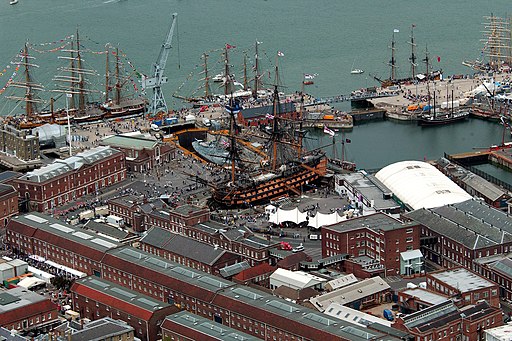 Portsmouth Historic Dock. By UK Government [OGL (http://www.nationalarchives.gov.uk/doc/open-government-licence/version/1/)], via Wikimedia Commons
The opening scene of Les Miserables was filmed at Portsmouth Historic Dockyard. The 19th Century dry dock was filled with just enough water for Hugh Jackman, Russell Crowe and hundreds of extras to look wet and miserable in.

Six-part Doctor Who story The Sea Devils was filmed at Portsmouth 40 years earlier. The producers sough the advice of the Royal Navy based at the dockyard, lending a bit of authenticity to the time travel series.

Portsmouth is still a busy shipping port, but the harbour tour often takes sightseers past the historic docks. You can also glimpse it from dry land – find it near the HMS Victory.

It’s not the cheapest attraction but it’s a good quality one, and you can pick up an annual pass which lets you into all the dockyard’s attractions. As well as Nelson’s ship, you can ‘tour’ the once-sunken Mary Rose or step onboard old and new vessels. There are several museums to explore too. 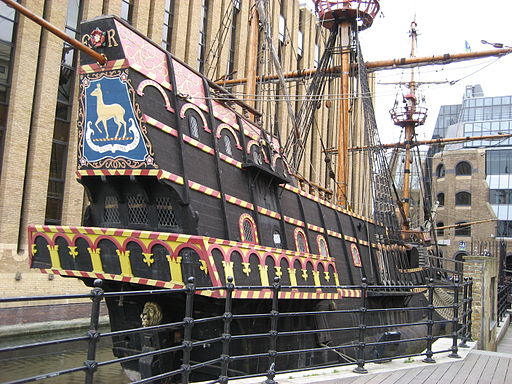 The Golden Hinde. By Jose L. Marin [GFDL (http://www.gnu.org/copyleft/fdl.html), CC-BY-SA-3.0 (http://creativecommons.org/licenses/by-sa/3.0/) or CC BY 2.5 (https://creativecommons.org/licenses/by/2.5)], from Wikimedia Commons
The Golden Hinde moored on London’s Southbank is an accurate reconstruction of Sir Francis Drake’s 16th Century ship. Drake was sponsored by one of Queen Elizabeth I’s courtiers to circumnavigate the globe.

Today’s version has sailed around the world too, and but you’re more likely to find it at St Mary Overie Dock by London Bridge.

Although the ship has popped up onscreen several times, including in NBC’s 1970s miniseries, Shogun, we think the Golden Hinde is the most fun in St Trinians 2: The Legend of Fritton’s Gold. It appears towards the end of the movie – look for it in the dock, and then sailing on the Thames.

Visitors can explore the decks like the St Trinian’s girls or visit the cabins to go back to the days of navigators and privateers. Tickets are affordable and it’s moored near The Clink Prison Museum, Borough Market and Southwark Cathedral (find out more about the area’s filming locations here).