The Sandman Filming Locations: In Detail 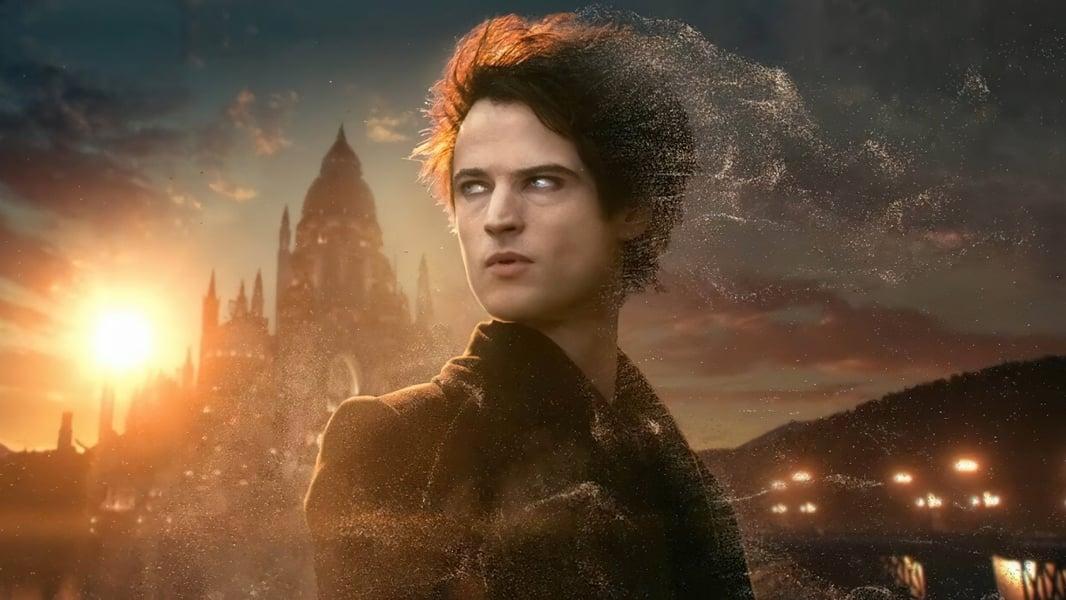 The Sandman, known as Morpheus or Dream (Tom Sturridge) is lord of the Dreaming, the place where mortals go when they fall asleep.

As Morpheus tries to right the chaos, he navigates the deadly tastes of a nightmare, Corinthian (Boyd Holbrook), who has escaped the Dreaming and now preys on humans. He also has to contend with Lucifer’s (Gwendoline Christie) hidden agendas, and the questionable assistance of demon hunter Johanna Constantine (Jenna Coleman).

Where Was The Sandman Filmed?

Filming began on 15th October 2020, with most of the filming completed across 2021. As you might have guessed, the most fantastical locations were custom built sets. These include Desire’s (Mason Alexander Park) own palace.

Is Netflix’s The Sandman Based on a Book? 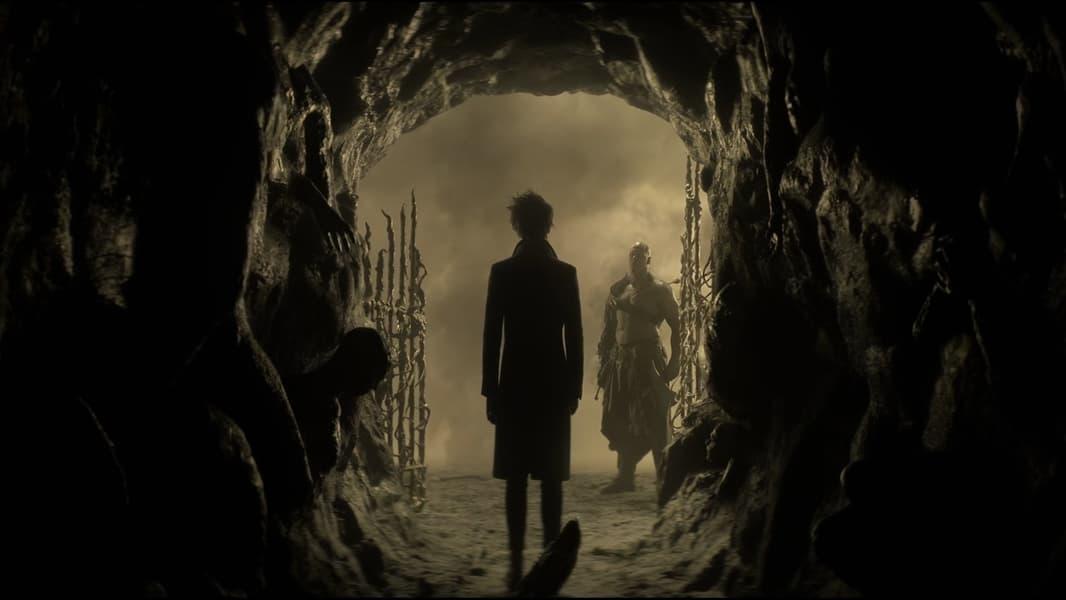 The Sandman
The Sandman on Netflix is based on the graphic novel series created by Neil Gaiman, Sam Kieth and Mike Dringenberg. Originally published by DC Comics in 1989, The Sandman became a ten-volume series. It spans centuries and numerous character arcs, introducing us to Dream’s siblings and the humans they cross paths with.

If you thought you had already heard about an adaptation, you’d be correct. Earlier film versions have halted for various reasons, but the Netflix Sandman project has made it to screens - with co-creator Neil Gaiman taking the lead.

“All of a sudden, instead of [just] being the guy who wrote the comic, I was an established showrunner… finally, I was in control, and finally, we were at a point where I had the power to bring into existence the kind of Sandman I would like to see on screen.”
Neil Gaiman

And the Audible version of The Sandman Volumes I and II is up and running.

Like the Netflix adaptation of Sandman, the cast list is not lightweight. It’s one for Good Omens fans, with Michael Sheen and David Tennant each voicing characters.

There are a few changes in direction, though all following the spirit of the original books.

One main difference between the graphic novel and the Netflix Sandman series, is the character John Constantine. He was replaced with Johanna Constantine for Netflix, to avoid crossover with DC’s Constantine series on NBC/Amazon. In the novels, the name belongs to Constantine’s ancestor, so it’s not a big shift. 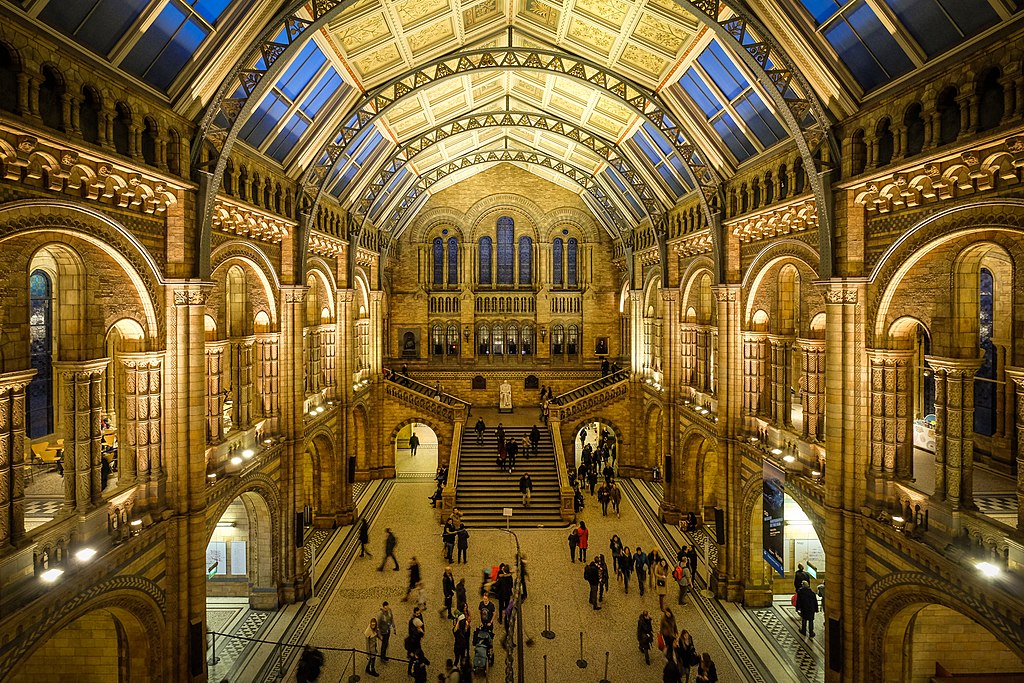 It’s hard to miss the Natural History Museum as the Great Hall of Dream’s palace. This famous space is officially known as the Hintze Hall, but most visitors will know it as the entrance hall.

Lincoln's Inn Library. Enchufla Con Clave, CC BY-SA 4.0
Netflix’s The Sandman location for Dream’s palace library is the library at Lincoln’s Inn. We first see during the opening of Episode 1. In the sequence, we pass Merv Pumpkinhead (Mark Hamill) who is cleaning a painting of the library, before we fly inside.

Of course, in practice this setting belongs to Dream’s librarian, Lucienne (Vivienne Acheampong). Without Dream, Lucienne has been holding the Dreaming together from her archives.

“Although in many ways the interior was very recognisably Lincoln’s Inn Library… once the computers and modern chairs had been swept away and replaced with impressive period furniture. The tables dressed with books, ledgers, ink pots and quills, it looked completely different.”
Naomi Johns, Filming Manager, Lincoln’s Inn

During everyday life, this space is a legal reference library, used by members of Lincoln’s Inn. The library existed as far back as 1471, so alongside everyday reference books, it holds manuscripts that date back hundreds of years.

The Sandman’s Fawney Rig manor filming location is Joyce Grove, a mansion in Oxfordshire. Fawney Rig is the home of the occultist Richard Burgess, and in the series it’s located in Wych Cross, Sussex. It’s one of the first locations seen in the series. In 1916, Dr John Hathaway is summoned to bring the Magdalene Grimoire to Fawney Rig for Burgess and the cult’s Death ceremony.

Joyce Grove was once owned by Bond creator Ian Fleming’s family. It was bought by the author’s grandfather when he first relocated from Fife to Oxfordshire, and stayed in the family

The Netflix movie is the latest screen appearance for the Henley mansion. It’s appeared in a number of films and TV shows, including Agatha Christie adaptations, Midsomer Murders, Jeeves and Wooster and The Imitation Game.

We think The Sandman’s beach location in the security guard's dream is Sandbanks Beach. In the scene, Fred dreams of the beach before Morpheus appears, and the guard fires shots.
Filming took place in the Bournemouth area in 2021, with the vintage beach set dressing popping up over several days.

Scotney Castle. Tony Grist, Public domain, via Wikimedia Commons
The Sandman’s filming location for Gregory’s castle is Scotney Castle in Kent. Look out for it in Episode 2, when Morpheus meets the dragon gargoyle, Gregory, and his owners Cain (Sanjeev Bhaskar) and Abel (Asim Chaudhry).

In reality, it’s a National Trust property where the ruins of a 14th Century castle sit alongside a Victorian mansion. Visitors will also find the picture postcard moat, and a tearoom – living gargoyles sadly don’t get a look-in though.

The Casanova nightclub location in The Sandman Episode 3 is Infernos in South London. It's known for a long list of musical connections, but also boasts an eclectic mix of screen appearance.

One of Infernos' less likely screen moments is in the nightclub episode of The Inbetweeners.

Episode 3 was filmed at several locations around the Old Royal Naval College in Greenwich. The first appearance is when Morpheus tracks down Johanna Constantine. He appears as she walks up the steps towards the church where she's scheduled to perform an exorcism.

Constantine is in the right place, because she walks towards the Painted Hall. The next scene seen Johanna meeting Erica in that exact location.

Painted Hall, Greenwich. Deror_avi, CC BY-SA 3.0
The exorcism scene in Ric the Vic's church was filmed at the Painted Hall in Greenwich. Johanna Constantine enters from the stairs leading up from the real entrance. The dual purpose ceremony takes place at the back of the hall, which is one of the most ornately decorated areas.

You might recognise the elaborately painted hall from other films. Greenwich’s Painted Hall has been used as a filming location for over 60 years – stars like Cary Grant and Ingrid Bergman walking its tiled floor. It's often used for regal scenes, so this isn't too much of a leap.

Look out for Morpheus talking to Matthew (Patton Oswalt) the raven just south of the Colonnades. The building you can see on the right, just behind Matthew, has appeared as The Crown’s Buckingham Palace exterior.

The open courtyard behind Dream was used as Cruella’s central London square. And Lady Whistledown’s Papers were distributed around the bench where the Neil Gaiman characters meet.

Canary Wharf. The wub, CC BY-SA 4.0
The scene where Matthew tells Morpheus why he was sent to help, was filmed in London's Canary Wharf.

Filming took place around Jubilee Park and East Wintergarden, a glass-walled events venue. You can see it in the background as the raven tells his story.

This location is a short journey from Greenwich, so it looks like they didn't travel far.

We think the building where Constantine and Morpheus try to retrieve the sand is part of the Old Royal Navy College. It looks like it could be the Inner Courtyard of Queen Anne Court.

The crosswalk in Buffalo is really Canary Wharf. In The Sandman Episode 4, the Corinthian offers the newly liberated John Dee (David Thewlis) his coat.

A London street art photographer caught the set dressing in progress, with Wall Street Journals popping up across the business district. Locals also caught sight of the crossing where much of the sequence's action takes place.

Hankley Common. Shazz / Hankley Common
The deserted cemetery in near the gates of Hell in The Sandman Episode 4 is Hankley Common. Though it looks like a bleak wilderness in the shot, it's actually found in scenic Surrey.

Hankley Common was used for The Sandman during an April 2021 shoot. According to Get Surrey, the crosses and faux skeletons added to the landscape took a few walkers by surprise.

The park location where Death meets Dream is Richmond Green. Film Richmond shared behind the scenes footage of The Sandman in progress around the area.

The Sandman's park scenes were filmed in June 2021. Filming took place in the area closest to Pembroke Villas, a row of semi-detached Victorian homes that runs alongside the Green.

The Sandman’s Kincaid house filming location is in New Square, around Lincoln’s Inn. An interview with Film London details the shoot.

The St Thomas’ Hospital scenes in The Sandman were filmed at 8 Stone Buildings. The location shoot was discussed by Location Manager Casper Mill in an interview with Film London.

In reality, the interior holds legal chambers. Stone Buildings is part of Lincoln’s Inn, and opens out onto historic Chancery Lane. It dates back to the 18th Century, along with the neighbouring buildings.

Petworth was used as a Netflix Sandman location and we think it may be Berlin in 1916. In the scene, Morpheus tracks down the escaped Corinthian.

Look out for Lombard Street and the surrounding area in the episode.

Lombard street and the town’s cobbled lanes are some of the area's highlights. A far cry from the episode's grim scene, but of course.

Sandman's White Swan Pub is on Old Palace Lane in Richmond. Dream and Death pass the pub before the baby scene.

The park where Death and Dream part ways is Richmond Green, where they started their journey. In the scene, Dream leaves Death at the park after following her for the day as she greets her next soul.

Dream passes through Brewers Lane, another Sandman filming location in Richmond. We see the narrow alleyway after he leaves Death and revisits another journey that the siblings took centuries earlier.

As he leaves Richmond Green he walks towards Brewers Lane. We then see him pass its historic buildings and its present day shops.

Michael Garlick / Dorney Court
We think The White Horse in Sandman is Dorney Court in Buckinghamshire. Previously used for a number of series and films including the 2014 film The Riot Club starring Max Irons and Sam Claflin.

Hob Gadlin's tavern is first seen in the present day with Canary Wharf in the background. Of course this is added for the Netflix series - the real building is in Buckinghamshire. Then we see it in Dream's 1389 flashback, and the journey through Hob's long life begins.

The nursing home where Unity Kinkaid stays in Sandman is Scotney Castle. It's here that Rose Walker (Kyo Ra) and Lyta Hall (Razane Jammal) meet Unity, who tells Rose about her family history. The episode's name, The Doll's House, is also revealed as Unity tells the story of the toy she never played with.

Avenue leading from Brookwood Cemetery. SuzanneKn at English Wikipedia, Public domain, via Wikimedia Commons
We think the cemetery in Rose’s dream in the Sandman Episode 8, “Playing House”, is Brookwood Cemetery in Surrey. Filming was reported in the area in 2021, and we think this is the scene where the location appears.

The Royal Empire Hotel filming location in The Sandman is the Sheraton Skyline Hotel near Heathrow. It’s the Cereal Convention venue in Episode 9, “Collectors”, with the Corinthian as guest of honour at the grisly gathering.

We think the convention hall also belongs to the Sheraton Skyline. Look out for the Royal Empire Hotel location’s distinctive wood panelling in the scene where the Corinthian is announced. This looks like a close match for the Heathrow Hotel’s International Suite.

You can also see several meeting rooms in the sequence where Gilbert investigates. And Rose is seen in the palm tree-lined pool area and reception as she searches for her brother.