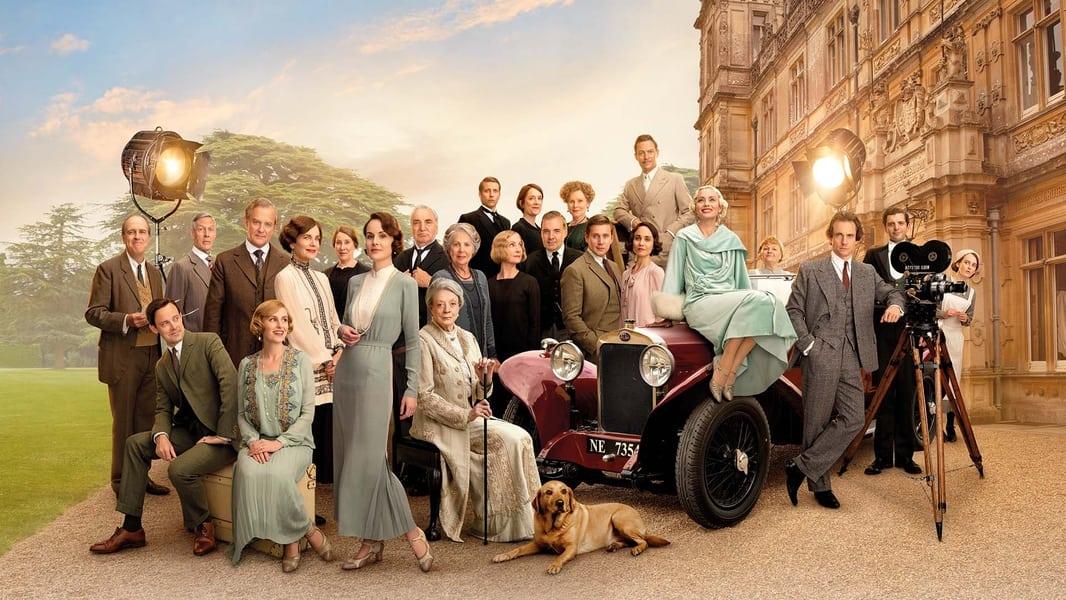 The real Downton Abbey is famously Highclere Castle, and it’s back for the second Downton movie. Other old favourites are set to return, alongside glitzy scenes filmed at Wrest Park and near Cannes – and many are Downton Abbey locations you can visit!

All the core cast members return for this new adventure, following on from the series and the first Downton Abbey movie in late 2019. The Dowager Countess (Maggie Smith), Lord Grantham (Hugh Bonneville), Lady Grantham (Elizabeth McGovern), Lady Mary (Michelle Dockery), Carson (Jim Carter) and Mrs Hughes (Phyllis Logan) are among the names coming back to our screens. And the latest plotlines bring glamorous new settings and faces to the line-up as well.

Where Was Downton Abbey: A New Era Filmed?

Downton Abbey A New Era was filmed at Highclere Castle, Bampton Village and St Mary’s Church, Wrest Park, Cogges Manor Farm and Leith. Lord and Lady Grantham and the family have taken holidays before, but this is the first time we’ve joined them on an international trip. And fortunately, the cast and crew really were able to visit locations on the Cote d’Azur.

The original Downton Abbey, Downton Village and several other regular locations are back for the second movie. And we also see several new Downton filming locations around the UK, with the Royal Yacht Britannia lending a stylish seafaring backdrop for the travel scenes. And one of the oldest cinemas in the country gets a chance to appear on the silver screen itself.

Filming took place in Summer 2021 – Elizabeth McGovern confirmed the end of the shoot with a Downton dog post in July. 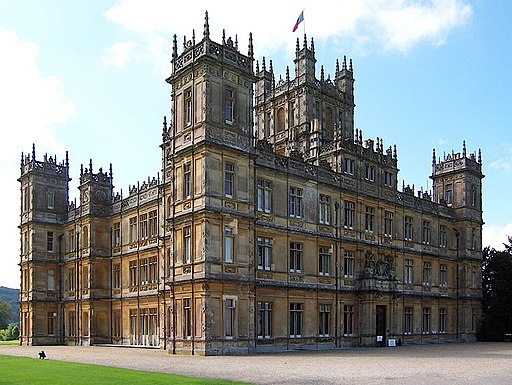 Highclere Castle. JB + UK_Planet, CC BY 2.0
The real Downton Abbey is Highclere Castle, home to the Carnarvons for centuries. As every fan knows, this location has been at the heart of the show since the very beginning, and the production was welcomed with open arms.

“We are thrilled to be welcoming Downton Abbey back to Highclere again. Julian and the wonderful cast and crew became so much part of our lives here at Highclere and we look forward to our next adventure with them.”
Lady Carnarvon, Highclere Castle

Highclere is open to the public on set days throughout the year, but our top tip is to keep a close eye on the site for their release. They tend to sell out quickly, with Downton fans from around the world wanting to tour the Lord and Lady Grantham’s home.

Tom Branson’s (Allen Leech) and Lucy’s (Tuppence Middleton) wedding scene was filmed at St Mary the Virgin Church in Belchamp Walter. It’s situated in a new part of the world for Downton, at the north of Essex close to the Suffolk border.

The East Anglian Daily Times picked up on the filming back in 2021, with crowds in late 1920s costumes spotted near Belchamp Hall and the church.

Belchamp Hall. Keith Evans / Belchamp Hall
Tom and Lucy’s wedding reception location is within the grounds of Belchamp Hall, in Belchamp Walter – just around the corner from the church where they are married.

Look out for an unexpected TV connection. Belchamp Hall is better known as Lovejoy’s Felsham Hall location. In the series, it was home to Lady Jane – played by Downton’s Mrs Hughes, Phyllis Logan.

You can stay in this Downton Abbey 2 location, and Lovejoy fans might be particularly keen on this one. Belchamp Hall offers a range of holiday accommodation, including the location used as Lovejoy’s workshop in two seasons of the much-loved series.

Bampton is the Downton village location that has appeared since Season 1. Though the Beamish Museum was used to extend the village for the first Downton Abbey movie in 2019, this classic location remains home to the village green, and exteriors of Isobel Crawley’s (Penelope Wilton) home, the hospital and the pub. 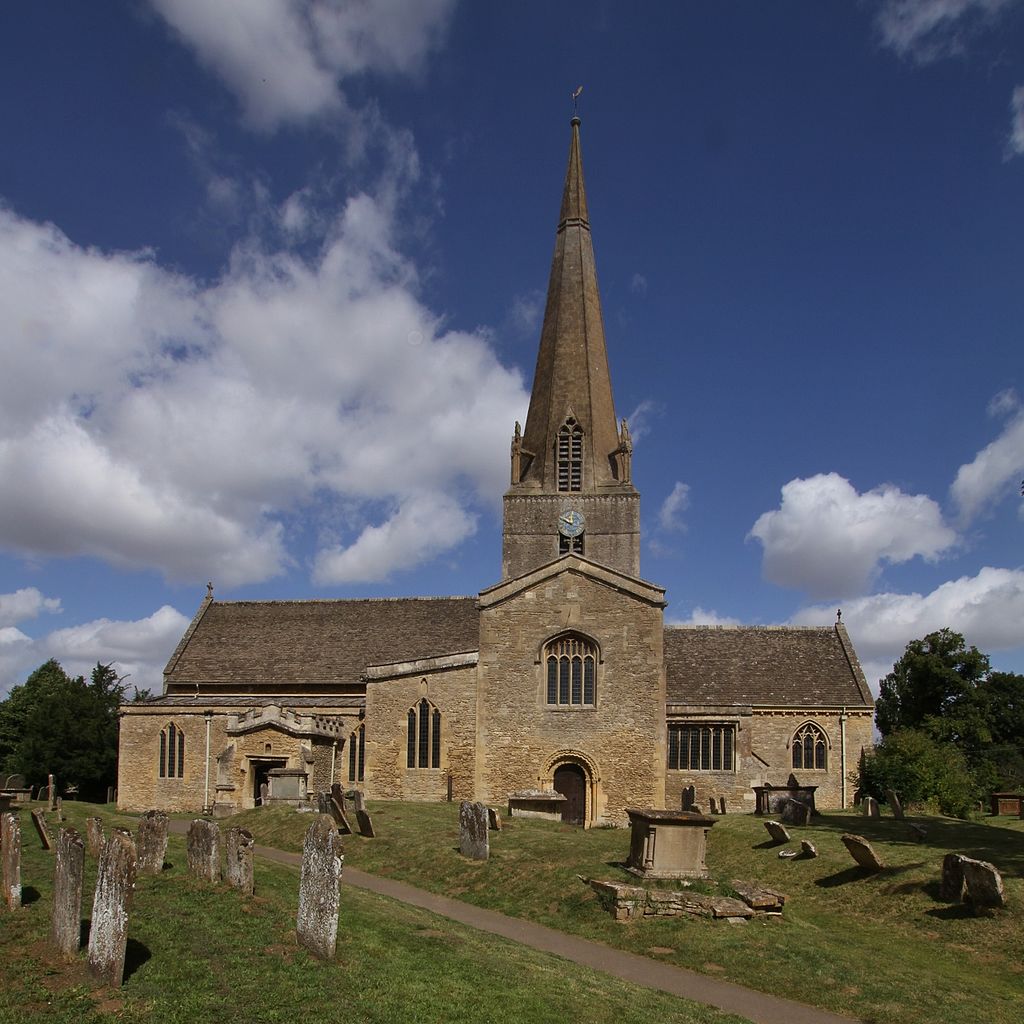 Bampton. Motacilla, CC BY-SA 4.0
The Crawleys’ local church is, once again, St Mary’s Church in Bampton. It makes a return for Downton Abbey 2, with early shots showing Carson and Mrs Hughes walking through its churchyard. Of course, this location has appeared in scenes from weddings to funerals throughout the show’s original run.

It’s another Essex filming location in the movie, this time right on the coast. Historically, it’s known for its dockyard – Harwich is thought to be the starting point for the Mayflower’s journey to America.

Local destinations including the Electric Palace were swept up in the town’s 1920s makeover, in some of the first location scenes filmed.

Downton Abbey 2’s cinema scenes were filmed at the Electric Palace in Harwich, Essex. It’s one of the oldest purpose built picture houses in the country, so the century-old Downton cinema location certainly fits the era. Fortunately it’s survived the decades, and only recently reopened to the public following a two-year renovation project.

Now, of course, we all get to see this piece of film history as the cinema appears onscreen itself. The scenes were shot in May 2021, with the Harwich cinema screening The Terror for one shilling a ticket.

In fact, you can watch the new Downton Movie at this Downton location. Check the Electric Palace Cinema’s site for details!

The Yew Tree Farm location was used in the original Downton series as the Drewes’ farm, where Edith places Marigold before changing her mind. When the Drewe family leave, the tenancy is eventually passed on to Daisy’s father-in-law, Mr Mason.

Cogges Manor Farm is in Witney, Oxfordshire – a relatively short drive from Downton Abbey and Village locations, Bampton and Highclere. The farm is open to the public by ticketed entry, and at the time of the movie’s release, you can visit the café without paid admission. As always, check before you travel.

Britannia. Ben Salter from Wales, CC BY 2.0
The yacht in Downton Abbey A New Era is the Royal Yacht Britannia, moored in Leith, just north of Edinburgh city centre. Used as the royal family’s yacht for decades, the Britannia was decommissioned in the 1990s and found a permanent home as a visitor attraction.

The interior is set up as it would have been when the Queen and Duke of Edinburgh sailed the waves. It’s just over a decade out of sync with the second Downton Abbey movie, but its classic yacht stylings are hard to argue with.

Simon Curtis (the movie’s director, and husband of Downton Abbey star Elizabeth McGovern) shared details from the location shoot in an interview with iNews:

“...it was weird for the actors because it’s in a dry dock. Thanks to the magic of CGI, Imelda Staunton walks along with the sea behind her. But when we were there, it was Debenhams car park”
Simon Curtis, Director

The Royal Yacht Britannia is moored at Ocean Terminal, a shopping and entertainment complex that was indeed the home of a Debenhams until recently. The department store is gone, but the multistory lives on for now.

You can visit this Downton Abbey 2 yacht location very easily, with ticketed entry that lets you tour the boat and access the cafe. And this cafe is worth noting, because it was built on the Royal Deck and all the food is prepared on board in the original Royal Galleys.

The high society fun doesn’t have to stop there though. If you really want to holiday like a Downton Abbey character then look into the Fingal. This smart floating hotel is moored next door in Alexandra Dock and is hosted by the Royal Yacht Britannia.

Villa of the Doves 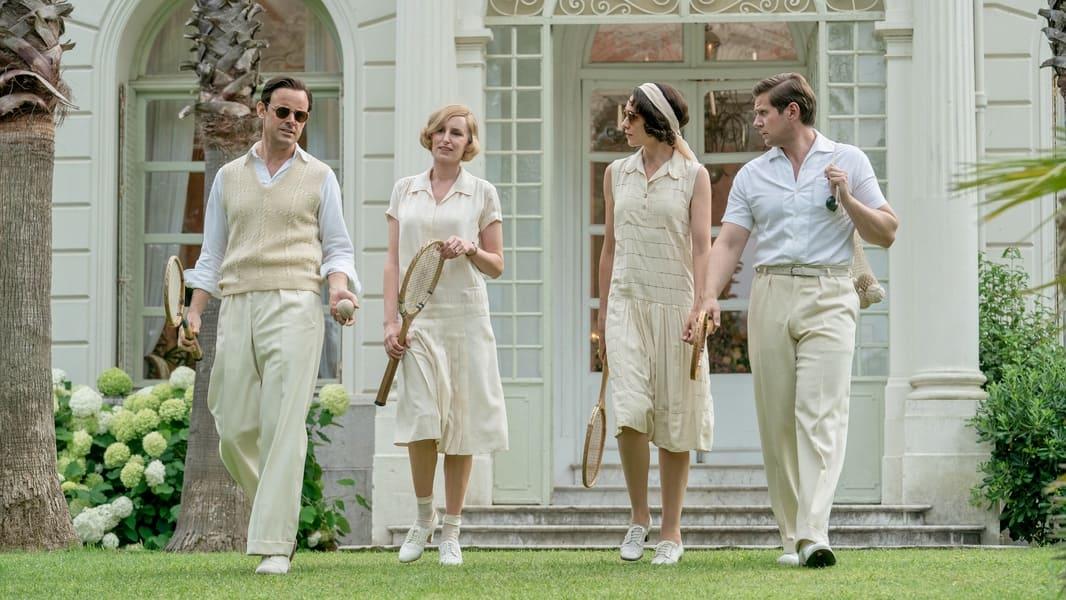 The opulent mansion was designed by Hans-Georg Tersling in the 19th Century, but twenty years ago, it was given a makeover by the decorator, Patrice Nourissat.

Like many British stately homes, this grand home was owned by a grand family until the 20th Century when it took on another use. Originally known as La Villa Germaine, it was occupied for the duration of World War II, and taken over by SNCF in the following years.

It was SNCF who settled on the name Villa Rocabella, which remained through various changes of use. The mansion was eventually sold to Nourissat around the time of the new millennium, changing hands again in 2020 when it was bought by a tech entrepreneur. It is now available as a filming location, and as holiday accommodation, thanks to the new owner’s vision of creating an ultimate leisure destination.

The Cote d’Azur picnic scene was filmed on location at the Villa Rocabella, on the lawns. Look out for the distinctive avenue of palm trees leading from the French doors to the pine trees that circle the main house. As we can see in the scene, Carson is back on duty, serving the family during their stay at the Villa of the Doves.

Villa Rocabella really does have its own tennis courts, part of the extensive and well-appointed grounds. Shots of the Lady Mary and Tom setting out for a tennis match were among the early stills released, and once you link it up to the filming location, this makes perfect sense.

The Cote d’Azur landscapes beyond the house belong to the Var department of Provence-Alpes-Côte d'Azur. While the French villa in Downton Abbey 2 might not actually be quite as close to Cannes as you would imagine, it’s certainly in the neighbourhood.

Wrest Park Orangery. MrB154, CC BY-SA 3.0
The cocktail party on the terrace in Downton Abbey 2 was filmed at Wrest Park in Bedfordshire. Wrest Park was the home of the de Greys for more than 600 years.

During the First World War, the mansion was used as a military hospital until it was eventually sold in 1917. If it looks familiar, you may have seen it onscreen in ITV’s Belgravia or perhaps you’ve seen its gardens before.

The gardens are actually older than the house, dating back to the 17th Century. Lancelot ‘Capability’ Brown was invited to add his own touches to the garden in the 1750s. But while he is known for shaping landscapes in his sweeping trademark style, it was agreed all round that he would preserve the French-inspired formal gardens. Wrest Park’s architecture was inspired by 18th Century French chateaux, in keeping with its gardens’ aesthetic. But in fact, the house wasn’t constructed until the 1830s.

You can easily visit Downton Abbey location Wrest Park’s gardens, with ticketed entry by English Heritage. Visitors can walk through three centuries of landscape design, including parterres, elegant gardens and ornate pavilion. There are family friendly events running on selected dates throughout the year, so it’s easy to make this Downton Abbey day trip fun for all ages.