When the focal point Star of Peace is stolen, Margaret and Stacy enlist the help of Margaret’s cousin, Fiona Pembroke (Vanessa Hudgens). She is the girls’ other doppelganger, supposedly reformed since we last saw her in The Princess Switch 2: Switched Again. This time around, we get to know Fiona’s story – and follow her around fantastic new castle locations along the way!

Where Was The Princess Switch 3 Filmed? The Princess Switch 3: Romancing the Star

The Princess Switch 3: Romancing the Star was filmed near Edinburgh at Newbattle Abbey, Barnbougle Castle and Borthwick Castle - Hopetoun House and The Dome return after appearing in The Princess Switch 2. But you’ve got to be quick or you’ll miss Montenaro Concert Hall’s sparkling cameo!

Filming took place in January 2021, with fake snow adding to Central Scotland’s own winter weather. And it looks like just about every scene was filmed around Edinburgh and the Lothians, from the returning locations to Peter Maxwell’s (Remy Hii) castle, Fiona’s convent and Hunter Canard’s (Will Kemp) hotel.

Where was The Princess Switch 2: Switched Again filmed?
Discover the locations behind Margaret’s coronation, Stacy’s bakery, the kidnapping scene and more here.

Built in the 13th Century, the castle has appeared in everything from The World is Not Enough and Loch Ness to Elizabeth: The Golden Age. And in a perfect match to the heist plotline in Romancing the Star, Eilean Donan is Mac’s castle in Entrapment, where we see Catherine Zeta Jones’ undercover agent learning to dodge laserbeams and launching the trope.

Newbattle Abbey College. Drkirstyross, CC BY-SA 4.0
The rest of The Princess Switch 3’s convent scenes were filmed at Newbattle Abbey, and it’s a fitting location. Situated in Dalkeith near Edinburgh, Newbattle was founded in 1140 by King David I as a Cistercian monastery.

500 years later, it became home to the Kerr family during the Reformation. It would become a residential college in the 1930s, when it was gifted to the nation – and it’s still a college to this day.

Margaret and Stacy’s meeting with the Mother Superior takes place in the Chapel at Newbattle Abbey. The building may have changed hands over the years, but some features have survived the centuries. Newbattle Abbey Chapel is available for wedding services, so you could get married at this Romancing the Star location! 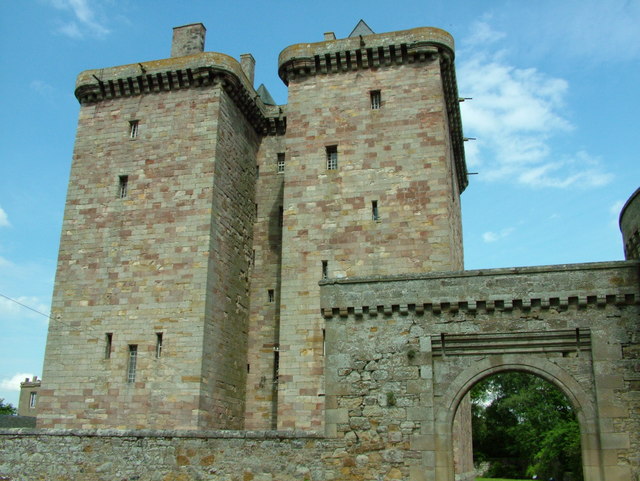 Borthwick Castle. stephen samson / Borthwick Castle
Where is Peter Maxwell’s castle in The Princess Switch 3? The filming location is Borthwick Castle in Scotland. Borthwick is the only privately-owned 15th Century castle keep of its kind, anywhere in Europe, and it’s been immortalised in various ways over the centuries. So you may recognise its name or unusual silhouette.

The church you can see alongside the castle as Fiona’s car approaches is medieval Borthwick Parish Church. And the surrounding countryside belongs to Midlothian – Borthwick is southeast of Dalkeith and Edinburgh.

The Great Hall where Fiona, or ‘Pemmie’, is reunited with Peter looks like Borthwick Castle’s Great Hall. With its imposing ceiling, fireplace and towering suits of armour, it’s every bit the medieval castle hall.

Peter and Fiona go through to a stone chamber to look at the Interpol reports and surveillance footage. We think this scene was also a filmed at Borthwick.

In the scene, Fiona plans to meet hotelier Hunter Canard as he walks his dog in gardens behind the library. The snow-covered gardens were caught on camera in the Edinburgh Evening News at the time, with local residents spotting the snow flurry and trees.

Hopetoun House. Andrew Shiva / Wikipedia
Where is Manderston School in The Princess Switch 3? It’s actually two locations, with Hopetoun House used for exterior shots. We’re actually looking at the back of the Midlothian mansion when Fiona’s mum leaves her at school for the holidays.

Hopetoun is, of course, known as an Outlander location. This location is no exception – it appears in Jamie’s duel scene in Season 2.

The Princess Switch 3 school common room location is the Banqueting Hall at Barnbougle Castle, on the Dalmeny Estate. You can see its wood panelling and unusual (for the area) arched windows in the Netflix movie.

In the scene, young Fiona and Peter spend Christmas together in the Manderston Academy dining room before stargazing. Though a room sign outside denotes it as a common room, we think this school location is definitely in the great hall or dining room category.

In reality, the Banqueting Hall is an events space at Barnbougle. The castle that’s privately owned by Sotheby’s chairman Lord Dalmeny, and it’s recently opened up after a ten year restoration project. While you can’t explore it on an everyday basis, the castle has now opened its doors as an events venue. And, it seems, a filming location – so perhaps we’ll see more of this location onscreen.

Fiona and Peter pass Montenaro Concert Hall after Fiona talks to Hunter at Etoile – The Dome in Edinburgh is clearly shown in the scene. It’s the exterior filming location for Margaret’s coronation in The Princess Switch 2: Switched Again.

We think Hunter Cunard’s castle in The Princess Switch 3 is Barnbougle Castle, appearing for a second time. This time the exterior is used, with a few great shots of the location in the final sequence.

Barnbougle is situated on the coastline, just as it appears in the Vanessa Hudgens movie. It looks remote but in fact it’s closer to Edinburgh than Hopetoun House, and you can walk to it from Cramond Beach or South Queensferry.

While the castle is privately owned, you can certainly visit this Princess Switch 3 location from a distance. The Shore Walk takes you along the Firth of Forth coastline, which offers great views of the Forth Bridges and Barnbougle Castle.

But The Princess Switch 3’s ballroom scene was filmed in the Newbattle Abbey Drawing Room. In the scene, Fiona dances with Hunter, though we all know there’s more going on in the background. This is another Princess Switch location that’s working hard – it already appeared as Fiona’s convent.

Look out for the Drawing Room’s distinctive painted ceiling. Not only do you catch a glimpse of it, there’s a close-up as the Princess Switch gang arrive at the party.

Newbattle Abbey. Kim Traynor, CC BY-SA 3.0
Margaret’s drawing room in The Princess Switch 3 is the Red Drawing Room at Hopetoun House. You might have noticed the ornate mantelpiece, supported by near life-size statues.

The unusual mantelpiece was created by sculptor Michael Rysbrack, as part of Robert Adam’s Neoclassical vision for Hopetoun.

The cream-coloured rooms in Belgravia Palace belong to Hopetoun House – these are the State Rooms. You can see this part of Margaret and Kevin’s house throughout the film, including the scene where they plan to ambush Hunter as he walks his dog.

Belgravia Palace dining room appears in The Princess Switch 2 and 3. Look out for it in the scene where Fiona swans in late for breakfast in Romancing the Star. It’s the real Hopetoun House Dining Room, and if you’re lucky enough to visit for a tour you might get to see the table set elegantly.

Fiona’s friends load up the flower van for their mission in the stables courtyard at Hopetoun House. It’s only onscreen for a minute, but you can see the distinctive façade behind Prince Edward and Stacey. We see it again as Stacey talks to the Mother Superior.

Outlander fans might know the Hopetoun courtyard as a Parisian street location from Outlander Season 2. 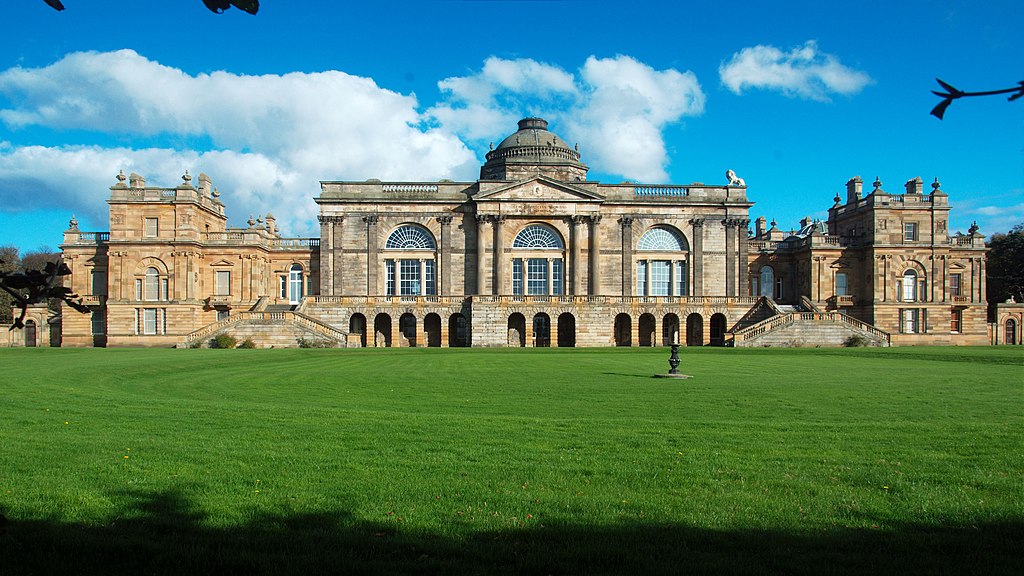 Gosford House. Magnus Hagdorn, CC BY-SA 2.0
We think Margaret’s marble staircase location seen in The Princess Switch 3 is Gosford House’s Marble Hall. The opulent marble arches and fireplace are seen during the choir auditions early in the movie, after the royals greet their guests.

After this scene, and later in the Vanessa Hudgens Christmas movie, the Marble Hall is seen from the upstairs balcony. This is another Outlander filming location - the hall appears in a pivotal scene of Season 3, as part of Ellesmere Manor.

Though you would be forgiven for not recognising the location. Romancing the Star’s impressive Christmas decorations give it a complete holiday makeover, with fairy lights twinkling from every column and archway.

Robert Adam designed the original version of this East Lothian stately home, completed at the start of the 19th Century. But the Marble Hall was added after a series of drastic renovations, and dates from the 1890s.

You can visit The Princess Switch 3 location at Gosford House on selected open days to find out more about its story. Check for dates, pricing and instructions on how to book.

The International Christmas Festival in The Princess Switch 3: Romancing the Star was filmed in front of Hopetoun House. The royal box, flags and choir areas were added specially for filming, on top of the Christmas lights we saw earlier in the Vanessa Hudgens movie.

In fact, the celebration area is used as a car park during public events. And yes, that means you can definitely visit the Belgravia festival location at Christmas! Book in advance to catch seasonal light trails and the annual Christmas fair, for the closest thing possible to Margaret’s palace as we see it onscreen!